Phil Vischer, a Christian author, filmmaker and creator of the children’s show “Veggie Tales,” made a video on systemic racism that has gone viral.

In the video, Vischer used data to describe the wealth gap and comparative likelihood of being stopped by the police. He also discussed segregation, vagrancy laws, exclusion from veterans’ benefits and other historically racist policies.

Vischer’s Video Ends With A Call To Action

Vischer started off his video posing the questions he spent the next 17 minutes explaining:

Vischer used a graphic to illustrate that black households in the country had 60% of the income of the average white household, but only 10% of the wealth, despite, he said, there being “lots of extremely wealthy African Americans: movie stars, pop stars, 75% of the NBA, 70% of the NFL, Oprah, Tyler Perry, [Dr.] Ben Carson, Morgan Freeman. And there are a lot of extremely poor white families; think of Appalachia and other parts of rural America.”

Vischer said that states created several laws only applicable to black men, such as “mischief,” “indecent gestures” and vagrancy laws which required them to be employed or they were sent to prison to work on plantations — a program called convict leasing, that the Equal Justice Initiative has pointed to as early indicators of mass incarceration.

Vischer went on to describe the impact of racial segregation and Jim Crow laws and how they affected schools, houses of worship, housing, employment, healthcare and even the burial industry. He also described the long-lasting effects that trying to push for desegregation caused:

Richard Nixon became the first candidate to run specifically on a platform of law and order. In 1968, 81% of Americans agreed that “law and order had broken down in this country” and the majority blamed “communists” and “Negroes who start riots.”

The GI Bill provided subsidized mortgages to help millions of men returning from war to buy their first home. While technically eligible for the GI Bill, the way it was administered left one million black residents on the outside looking in.

In New York and New Jersey, the GI Bil insured more than 67,000 new mortgages; fewer than 100 of those went to homes purchased by nonwhites. In 1947, there were 3200 mortgages in Mississippi guaranteed by the government for returning veterans; of the 3200, only two went to black veterans. As a result, white families after the war were able to build home equity, growing wealth for retirement, inheritance and college education for their kids.

He also described how those who fought segregation faced violence, such as the rioting and burning of an apartment complex in Cicero, Illinois, which the Chicago Daily Tribune at the time said took place because, “rioters tried to wreck Wednesday night because a Negro rented an apartment there.” 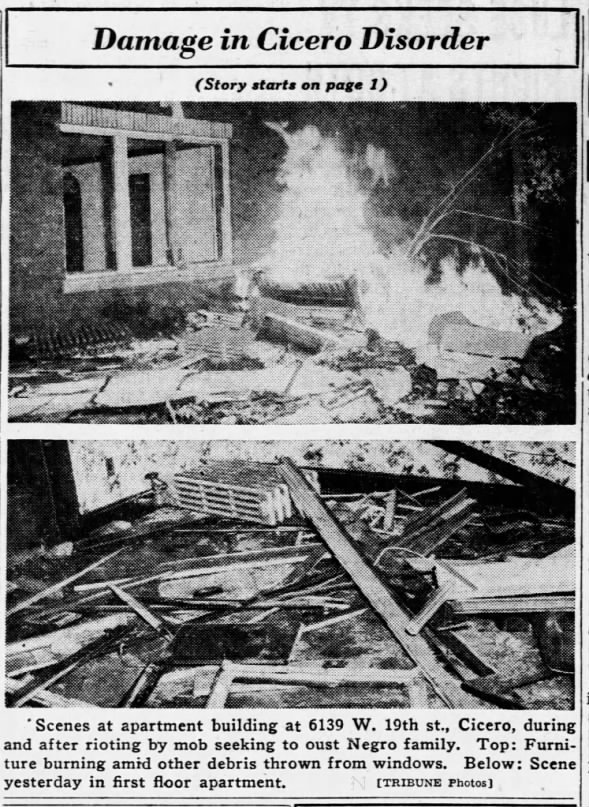 Vischer also described the loss of economic opportunities, showing how employment in blue-collar jobs went from 70% to 28% in less than 20 years.

As unemployment skyrocketed in African American communities, so did drug use. As drug use increased, so did crime. A dynamic that we see today playing out in white, rural communities hit hard by unemployment and opioid addiction. Throughout the 1970s, white America became increasingly concerned by images of black violence shown on TV and in magazines. Drugs were the problems, drug dealers and drug users were the enemy. So we decided to treat the drug epidemic, not as a health crisis, but as a crisis of criminality and we militarized our response …

He described the increase in funding for anti-drug, crime-fighting agencies between 1980 and 1991 as well as the new laws which imposed mandatory minimum sentences and evictions and made many ineligible for government benefits.

He also described how public housing funding was cut under the Clinton Administration, which Bloomberg’s CityLab and Harvard University reported on and at the same time, funding for criminal justice and drug crime arrests increased significantly, which BBC has reported.

“We imprison a higher percentage of our black population than South Africa ever did during Apartheid,” Vischer said.

In the latter half of the video, Vischer went deeper into crime statistics and described studies such as the one in Volusia County, which proved that black drivers were stopped at a disproportionate rate than their white counterparts.

Vischer ended his video with a call to action:

I’m not here to tell you what the right solutions are because I don’t know. I’m just here to ask you to do one thing. It is the thing that begins every journey to a solution for every problem. What am I asking you to do? Care.

The video ends with a passage from Isaiah 1:17: “Learn to do right; seek justice. Defend the oppressed. Take up the cause of the fatherless; plead the case of the widow.”

Vischer Says The Response Has Mostly Been Positive

Vischer said that he was encouraged by the response he received, which he described as 99% positive in a Facebook post he wrote two days after posting the video.

Vischer said the number one complaint he received about the video was why he didn’t discuss the breakdown of the nuclear family and its connection to whether the black community as a whole would be “doing better if they hadn’t abandoned God’s plan for the family.”

In another Facebook post, Vischer said he didn’t get into that explanation for several reasons, one being time. However, he also said the rising number of single-parent households is largely a factor of being working class and compared black families to poor white families in coal mining towns. He also said that a disproportionate number of black people are in the working class due to policies that prevented them from building wealth, such as exclusion from the GI bill and social security.

Finally, he added, “I fear, too often we use this as a way to throw blame back on impoverished communities. ‘They wouldn’t be struggling so much if they did things the right way – like we did.’ And while there could be some truth to this (two parent households ARE more stable), it is really missing the big picture.”

Loading more stories
wpDiscuz
0
0
Would love your thoughts, please comment.x
()
x
| Reply
Phil Vischer, a Christian author, filmmaker and creator of the children's show "Veggie Tales," made a video on systemic racism that has gone viral.