The ninth of week of challenges has arrived in Fortnite Season 4 and some of them are a lot more difficult than you might initially suspect.

While the majority of them, like always, just come down to playing the game as you normally would, some of them can be a bit difficult.

For example, dancing at the highest and lowest points of the map is tough if you don’t know where to look. This same ideas applies to collecting the five floating rings at Steamy Stacks.

At the very least, these rings are narrowed down to this location, but it’s no fun if you don’t know where to look. Not to fear, we have you covered.

Where to Find 5 Floating Rings 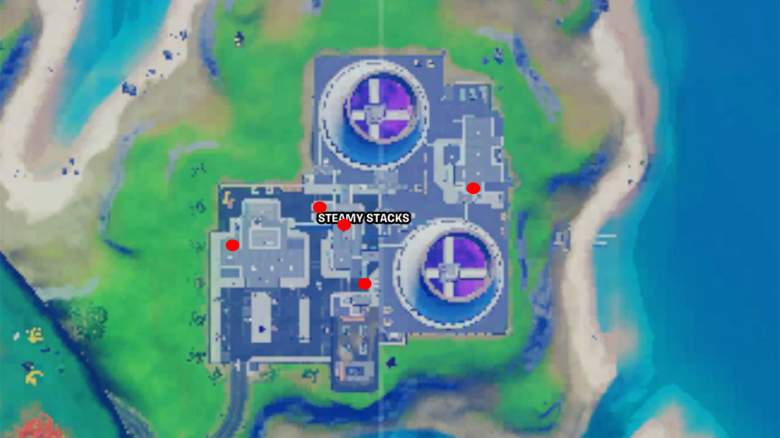 Once you land at Steamy Stacks, you’ll need to remain vigilant as this will more than likely end up being a popular drop spot this week thanks to the challenge.

Luckily, you won’t have to collect all of these rings in one game, so take as long as you like. Also, you can collect the rings even if you turn into a Shadow, so don’t let that discourage you easier. In fact, it’s a bit easier to do it that way since you have better mobility.

These aren’t too difficult to find as the majority of them are outside, with the furthest left one being on a balcony, the next two on pipes, and then the final two are inside buildings.

With enough scouring around in the general areas, you shouldn’t have too much trouble finding them all. Make sure you check the ceilings once inside the buildings!

Having the Fortnitemares fog covering the map doesn’t make things easier, but who doesn’t like a nice aesthetic while they’re doing challenges?

What About the Rest of Challenges?

As for the rest of the Week 9 challenges, they are pretty straightforward as all you’ll have to do is heal up your team, knock opponents back with shockwaves, or eliminate enemies.

We’re entering the home stretch of Fortnite Season 4 challenges, so we’ll have to see if Epic has something else cooked up for the remained of the season since we have over a month to go still.

READ NEXT: Where to Find Every Fortnite Season 4 Week 9 XP Coin