Aaron Salter was a retired Buffalo police officer and beloved security guard who was one of the 10 people murdered by a white supremacist gunman who targeted a Tops Friendly Market grocery store.

Buffalo Police Chief Joseph Gramaglia called him “a hero in our eyes” during a news conference. Salter confronted and shot the gunman before the gunman shot him to death.

Payton Gendron is the suspect accused of killing at least 10 people at the grocery store in store in Buffalo, New York, on Saturday, May 14, 2022, while live-streaming video. Gendron was taken into custody at the scene, Buffalo Police said. Three others were wounded. Gendron is facing first-degree murder charges in New York state court and could also face federal charges, including hate crimes, officials said. The names of the victims have not been released yet.

A racist and anti-Semitic manifesto and a Twitch livestream were attributed online to the gunman, but authorities have not verified those accounts. A graphic video emerged that shows bodies lying in the parking lot as law enforcement officers take the suspect into custody. Gendron is from Conklin, New York. He said in the manifesto he is an 18-year-old college student and a self-described white supremacist. In the manifesto, he said he targeted a city with a large Black population.

Here’s what you need to know about Salter:

1. Salter Was Remembered as a ‘Beloved Security Guard’

“One of the individuals inside the store is a security guard, a beloved security guard, who is a retired Buffalo Police officer, a hero in our eyes, engaged the suspect, fired multiple shots, struck the suspect, but because he had heavy armor plating on, that bullet had no round,” the police commissioner said in the news conference. The suspect then killed the security guard, police said.

The Daily Beast reported that Salter had worked at the grocery store for four years.

According to authorities, 11 of the 13 victims who were shot were Black and two were white. The victims include four store employees. Buffalo Mayor Byron Brown said at a press conference, “Buffalo is known as the city of good neighbors nationally and internationally. This is a community where people love each other. The shooter was not from this community. In fact, the shooter traveled hours from outside this community to perpetrate this crime on the people of Buffalo.

Brown added, “A day when people were enjoying the sunshine, enjoying family, enjoying friends, all manner of happy activities. People in a supermarket, shopping, and bullets raining down on them. People’s lives being snuffed out in an instant for no reason.”

2. Salter Worked as a Police Officer Out of the Northeast District; His Son Also Called Him a ‘Hero’

As a police officer, Salter, 55, worked in the Northeast District, according to the newspaper, which added that Salter’s gunfire did not take down the shooter because he was wearing “protective tactical gear.”

“Today is a shock,” his son, Aaron Salter III, told The Daily Beast. “I’m pretty sure he saved some lives today. He’s a hero.”

Salter left behind three children. According to The Daily Beast, he entered the Buffalo police department immediately after graduating from high school.

NBC New York reported that the gunman carried “a rifle and wore military-style gear or a type of body armor.”

3. Salter Once Survived a Shotgun Attack While Working as a Police Officer

In 1996, the Buffalo News reported about Salter and another office, saying the two Buffalo police officers “escaped a shotgun attack early today on Leroy Avenue by shooting first at one of two men later arrested by the Special Weapons and Tactics team.”

The suspect “stepped from behind a door and pointed a loaded 12-gauge shotgun in the faces of Kensington Station Officers Aaron Salter Jr. and Gerald Smith,” according to the old article.

“My first reaction was to duck,” Salter said to the Buffalo News at the time. “I don’t enjoy looking down the barrel of a shotgun, and if it hadn’t been for my partner shooting first, it would have been a golden opportunity to shoot us. My partner probably saved us.”

4. Salter Called Himself a ‘Jack of All Trades’ & Was Working on a Project of ‘Running Engines on Water’

I have been a police officer for the last 27 years the last two I have been in the traffic division, I do the events at the First Niagara Center along with riding the motorcycle doing parades and races around the city of Buffalo. I’m a jack of all trades a master of none I’m always working on my vehicles and or my project of running engines on water for the last four years or so, I would like to realize my dream of getting cars to run off of water using my newly discovered energy source some day.

He wrote on LinkedIn that he was a police officer for AWS Hydrogen Technologies LLC and had an associate’s degree in Communication and Media Studies from Canisius College, which he attended in the 1980s

This is my companies facebook page im excited about my company I stated 6 months ago I believe I can change the way we power are cars boats generators and it comes from water. I just recently signed up with the Daymond John’s inside edge team that I will be starting Friday the 3rd of June. So I can start licensing this amazing product to compaines that want to use a new energy source. What I have named, Reyhated Hydrogen. And we can get one step closer to helping are planet rid inself of these dangerous hydrocarbons that are damaging are Ozone and causing global warming to are planet. Come join me on this mission thanks.

5. Salter’s Mom Worked at the Tops Grocery Store as a Cashier 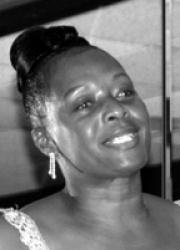 According to her obituary, Salter’s mother once worked at the Tops store.

“Carol worked for Tops Super Market in Central Park Plaza for 15 years as a cashier, then Head Cashier promoted to Front End Manager until 1986. Carol and her husband, the late Aaron Salter Sr., opened and operated AC Laundry & Dry Cleaners located at 379 Genesee Street for 12 years, closing their business in 1998,” it reads.

The Buffalo News reported that the suspect was “dressed in body armor and armed with a high-powered rifle.” New York Governor Kathy Hochul said the suspect is believed to have used a gun that was legally purchased but was modified with illegal magazines. She said investigators are working to determine where the magazines were purchased. She said they are sold legally elsewhere in the country, including in Pennsylvania.

READ NEXT: Possible Break in 2009 Case of Missing 17-Year-Old Girl

Loading more stories
wpDiscuz
0
0
Would love your thoughts, please comment.x
()
x
| Reply
Aaron Salter was a retired Buffalo police officer and beloved security guard who was one of the 10 people murdered by a white supremacist gunman in Buffalo.