CBS Detroit April Moss is a reporter and meteorologist at CBS Detroit who made accusations about "discrimination" at the station to Project Veritas.

April Moss is a former meteorologist and local TV reporter at WWJ CBS Detroit. She said during an on-air weather report she plans to reveal accusations of “discrimination” to Project Veritas. The journalist did not go into details during the Sunday, June 20, 2021, broadcast. Project Veritas has yet to post its interview with Moss.

But in an online fundraising campaign, Moss said she “felt led to stand up to the medical discrimination that was being enforced by ViacomCBS on its employees.” She added, falsely, “The mandate for any individual to be tested for COVID19 for employment or participation at a university or other institution violates federal law.” Moss also said, “My hope is that others who are faced with similar situations in their workplace can find the strength and courage to stand up for their God-given rights. Thank you so much for contributing to myself and my family. God Bless You!”

CBS Detroit is owned by ViacomCBS as part of the CBS Television Stations Grou. According to the U.S. Equal Employment Opportunity Commission, it is not against federal law for employers to mandate COVID-19 testing. Moss’ GiveSendGo campaign links to websites by coronavirus conspiracy theorists America’s Frontline Doctors and the anti-vaccine group Children’s Health Defense. That anti-vax group was founded by Robert F. Kennedy Jr. and has spread COVID-19 misinformation, according to NPR.

WWJ told AdWeek’s TVSpy in a statement, “April Moss objected to WWJ-TV’s policies regarding Covid-19 testing and wearing masks inside our station, which are based on CDC, state and local guidelines. Any suggestion that she was in any way a victim of ‘discrimination’ due to her concerns about these policies is completely false. In fact, we allowed April to perform her weather anchor duties from home as we explored her concerns. While we respect and support our employees’ freedom to have their own opinions, they are not entitled to use our station news broadcasts as a platform for sharing personal views. Ms. Moss is no longer with our station.”

Moss is following in the footsteps of former Fox 26 Houston reporter Ivory Hecker, who made a similar on-air tease a week earlier and then was fired by her Texas news station. Hecker provided secret recordings to the controversial James O’Keefe-led right-wing activist group and said she was censored when she tried to cover Bitcoin and hydroxychloroquine during the COVID-19 pandemic. While Hecker lost her job, she has raised more than $170,000 through a “GiveSendGo” campaign set up by her mother on the Christian fundraising website. Like Hecker, Moss is being celebrated on right-wing social media as a mainstream media “whistleblower”

Here’s what you need to know about April Moss:

1. April Moss Interrupted Her Sunday Forecast to Say She Would Be Discussing ‘Discrimination at CBS’ With Project Veritas Before Returning to the Weather

"I will be sitting down this week with Project Veritas…”#CBS62Whistleblower pic.twitter.com/4roVL9KNXS

Moss interrupted her Sunday night forecast to tell viewers about her upcoming interview with Project Veritas. She began the segment, which was being broadcasted from her Macomb County, Michigan, home, normally, saying, “Good evening and thanks for watching ‘First Forecast,’ I’m meteorologist April Moss and happy Father’s Day. Today we saw temperatures above normal again, topping out at 85 degrees at Metro airport. Plenty of sunshine today. But all good things must come to an end and that starts as early as tomorrow morning, with showers moving in around 8 a.m.”

She then transitioned, saying, “And speaking of a brand new week, I will be sitting down this week with Project Veritas to discuss the discrimination that CBS is enforcing on its employees. Tune in to Project Veritas for my full story. Now, later Monday we will share those showers continuing through late morning. But by evening we’ll see dry conditions and more comfortable temperatures as well.

The 38-year-old Moss has been at the Detroit news station CBS 62 for most of her career as a journalist. She has held a variety of roles at the Michigan TV station, including meteorologist, weather forecaster, fill-in news anchor, weekend weather anchor on sister station CW50, Street Beat host and Eye on Detroit reporter, according to her biography on the station’s website. She has also worked as a producer, writer, editor and multimedia journalist, according to her LinkedIn profile. 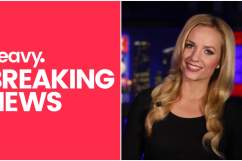 2. Moss, a Maryland Native, Graduated From Central Michigan University in 2005 With a Degree in Broadcast Journalism & Was a Cheerleader

Moss was born April 15, 1983, in Maryland. According to her LinkedIn profile, she graduated from Central Michigan University in 2005 with a degree in broadcast journalism.

According to her bio on her news station’s website, “April cheered on the Chippewas as a member of the coed cheer team for football and basketball,” while in college at Central Michigan. She also studied political science while at the university.

Before taking the job at the Detroit news station, Moss worked at WBAL-TV in Baltimore. According to the CWDetroit website, “April Moss joined the CW50 First Forecast team in April 2012. A Maryland native, April discovered her true love for broadcasting while interning at the NBC affiliate, WBAL-TV 11 in Baltimore.” She also previously “worked in various on-air positions for News Central 34 in Mt. Pleasant.”

3. Moss Completed Her Degree in Atmospheric Sciences & Meteorology at Penn State University in 2020

Moss completed her degree in atmospheric sciences and meteorology at Pennsylvania State University in 2020, according to her LinkedIn profile. After finishing her studies at Penn State, Moss became a meteorologist at CBS Detroit in 2020. She was previously a weather forecaster.

According to the CBS Detroit website, Moss, “is a host on Street Beat airing Saturdays at 8:30 am on CW50 and has reported for Eye On Detroit about the rising water levels in Macomb and St. Clair Counties, and The National Weather Service’s Storm Ready initiative.” She’s a “member of the National Weather Association,” CBS Detroit says.

4. Moss, Who Is Married With 4 Sons, Says She Spends Her Time Off the Air With Her Family & Volunteering at Her Church

Moss is married and has four sons, according to her social media pages. Moss’ husband, Nate Maus, is a former high school principal and teacher who now works as a contractor, running his own company, Maus Contracting, according to his LinkedIn profile.

Moss says on her CBS Detroit bio, “Outside of CBS, Moss’ hobbies include skiing, kayaking, and just about any outdoor activity with her husband and sons.”

On her biography on the CW Detroit website, Moss says, “When she isn’t working, she spends most of her free time with family and volunteering at her church. Her interests include traveling, writing, blogging, decorating, cooking and planning events for family and friends.”

5. A GiveSendGo Fundraising Campaign Has Raised More Than $30,000 for Moss

Project Veritas, which has been banned from Twitter, posted on Facebook, “CBS 62 Insider April Moss is the latest BRAVE individual blowing the whistle on her network’s corruption.” The group then linked to Moss’ GiveSendGo campaign, which had raised more than $30,000 of its $350,000 goal by Tuesday, June 22, 2021.

In a video posted to YouTube by Project Veritas, Moss provided audio of a conversation with a co-worker and said he threatened that she would be fired. Chuck Davis, the chief engineer at WWJ-TV, can be heard telling Moss, “So I saw what you did on the air yesterday. … You may get terminated for that, are you aware of that?” Moss replies, “Yes, I am.”

He then says, “Alright, so you’re OK with that then?” Moss responds, “I understand if CBS decides to let me go, I do understand that.” Davis then says, “Why would you do that? You know, basically that’s the most selfish thing I’ve ever seen in 36 years working there, without even a close second. Because you don’t give a crap about anybody else, you know … if you get terminated, which you might, and then the burden it’s going place on other people. You couldn’t care less. It’s just all about April Moss.”

James O’Keefe wrote on Facebook, “Just interviewed April Moss, a current TV Journalist who’s worked at CBS in Michigan for nine years. She has recordings, emails, and evidence journalism was practiced in an unethical way. “I couldn’t live with myself. I owe it to the people,” she said, as she played the recordings. This is a movement, that’s just getting started. It’s going to be Biblical. BE BRAVE. DO SOMETHING. #CBS62Whistleblower.”

Hecker, who was fired from her job, praised Moss on Facebook, writing, “Wow I know that took some grit. Looking forward to hearing what’s going on at CBS. #freethepress #pressxit.”

Loading more stories
wpDiscuz
0
0
Would love your thoughts, please comment.x
()
x
| Reply
April Moss is a former meteorologist and TV reporter at WWJ CBS Detroit. She said during an on-air weather report she plans to reveal accusations of "discrimination" to Project Veritas.