A viral video shows what appears to be three law enforcement officers beating a man in a use-of-force incident in Crawford County, Arkansas.

Deputy Zack King, Deputy Levi White and Mulberry Police Officer Thell Riddle are facing an investigation after the incident, the Crawford County Sheriff’s Office confirmed on Facebook. Riddle was hired by the Mulberry Police in 2017, according to the department’s Facebook page. He is a former Crawford County deputy and was also the chief of the Gans Police Department in Oklahoma, according to his LinkedIn profile.

The sheriff says the man attacked deputies first, pushing an officer to the ground and punching him in the head, according to THV11. An Arkansas State Police investigation will review the officers’ use-of-force actions. The FBI is also involved, according to the sheriff’s office.

“There was a comment shared about Zack King’s address yesterday, this is a civilian and is NOT the Crawford County Deputy or associated with the Crawford County Sheriff’s Office. Please refer questions to the Arkansas State Police and Federal Bureau of Investigations. We are cooperating with all aspects of their investigation and will make a statement to the public at a later time,” the sheriff’s office said on Facebook on August 22.

Randal Ray Worcester, 27, of Goose Creek South Carolina, is the man in the video, according to jail records.

The incident occurred at the Kountry Xpress in Mulberry, Arkansas. Arkansas Governor Asa Hutchinson weighed in on Twitter as the video went viral.

“I have spoken with Col. Bill Bryant of the Arkansas State Police and the local arrest incident in Crawford County will be investigated pursuant to the video evidence and the request of the prosecuting attorney,” he wrote. 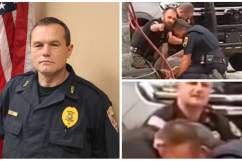 The Sheriff Says, ‘I Hold All My Employees Accountable’

The Crawford County Sheriff’s Department wrote on Facebook, “In reference to the video circulating social media involving two Crawford County Deputies, we have requested that Arkansas State Police conduct the investigation and the Deputies have been suspended pending the outcome of the investigation. I hold all my employees accountable for their actions and will take appropriate measures in this matter.”

According to USA Today, police accuse Worcester of “making threats to a convenience store employee in Mulberry, Arkansas, on Sunday morning” August 21, 2022. He was taken to the hospital but then booked in the jail, USA Today reported.

According to TVH11, Worcester is accused of spitting on the convenience store manager before threatening to “cut off their face.”