Twitter/Facebook Brent Renaud and a police photo of his press pass.

Brent Renaud was an award-winning freelance journalist and documentary filmmaker from the United States who was shot and killed by Russian forces in Ukraine, according to police in Ukraine.

Andriy Nebytov, the head of Kyiv’s regional police force, posted photos of Renaud’s body, American passport and New York Times press pass on Facebook, confirming his death. One of the photos is graphic.

Police also shared graphic videos from the scene of Renaud’s death on the same Facebook page. If you want to see them, you can find them here, but be forewarned that you can see Renaud’s body, partially covered by a blanket and lying on the ground, behind the officer. In another post, police ran a close-up photo of Renaud’s head wound.

Ukrainian police are trying to highlight the reality of the American journalist’s death to the world by sharing the photos and videos, using it to further condemn the Russian invasion. Irpin, where Renaud died, is a city near Kyiv. The Ukrainian police claim that Russia fired the fatal bullet, although that could not be independently confirmed.

“The occupants…kill even journalists of the international media who try to show the truth about the inaction of Russian troops in Ukraine,” Nebytov wrote. “A 51-year-old world-renowned media correspondent was shot in Irpen today. New York Times. Another journalist is injured. Now they are trying to remove the victim from the war zone. Of course, the profession of a journalist is a risk, but US citizen Brent Renaud paid his life for trying to highlight the aggressor’s ingenuity, cruelty and ruthlessness.”

He also wrote, “In addition to the dead 51-year-old Brent, two more correspondents were injured. Now the wounded have already been rescued from the scene and taken to the capital hospital. The state of health of journalists remains unknown.”

1. A Filmmaker Who Was With Renaud Described on Video How They Approached a Bridge When Gunfire Rang Out

🔴🔴 Two American journalist shot by Russian at Irpin bridge. One is under surgery at the main hospital in Kyiv and the other was shot at the neck. pic.twitter.com/9lihX1JJ58

A man named Juan, who said he was from the United States, revealed in a video posted to Twitter by journalist Annalisa Camilli from a hospital that he was with Renaud when Renaud was shot in the neck. CBS News identified him as Juan Arredondo, a documentary filmmaker.

“We were, we crossed on, the first bridge, in Irpin, we were going to film other refugees leaving. And we got into a car; somebody offered to take us to the other bridge, and we crossed the checkpoint, and they started shooting at us. So the driver turned around, and they kept shooting,” Arredondo said. 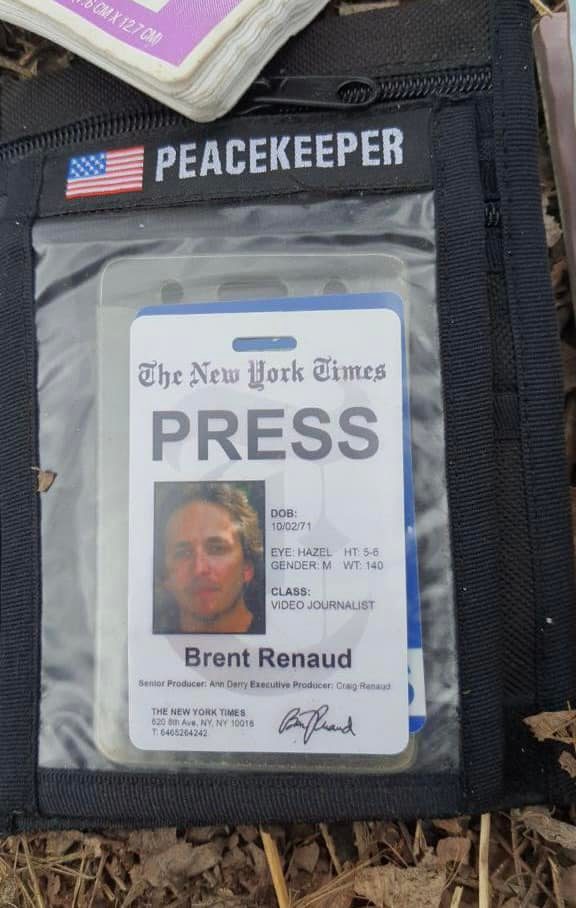 “My friend is Brent Renaud and he’s been shot and left behind. … I saw him being shot in the neck, and we got split,” he said.

Brent Renaud is a documentarian whose intimate films range from Arkansas to Afghanistan. Today ⁦@niemanfdn⁩ he shared a moving account of his life & what he seeks in his work—“thoughtful stories about disenfranchised people.” Here’s some of that work https://t.co/Rhsfp6UHOC pic.twitter.com/qUaYJo43VU

He said an ambulance brought him there. He said he didn’t know how Renaud was doing.

You can see Arredondo’s Instagram page here. He shared photos recently from the war zone.

There are questions about which forces were in the area at the time.

The description from this eye witness says Renaud was shot, and it seems only Ukrainian forces were in the area, based on news reports. https://t.co/F6EUvOLXK5

Other possibility is a Russian sniper. War is hell. https://t.co/vc6XJmrsZ4

Trailer for the new podcast we are producing https://t.co/fotIUnRnYC

According to Renaud’s IMDb profile, Renaud “was a Peabody and DuPont Award winning filmmaker and spent the past two decades producing films and television programs with his brother Craig.”

The site says “The Renaud Brothers” made their mark filming “humanistic stories” about wars, including Iraq and Afghanistan, but also “the earthquake in Haiti, political turmoil in Egypt and Libya, the fight for Mosul, extremism in Africa, cartel violence in Mexico, and the youth refugee crisis in Central America.”

They have won many prominent television and journalism awards and received “critical acclaim” for their films in prominent publications, the site says.

They covered white supremacy and the Black Lives Matter movement for the Boston Globe, according to their Twitter page.

The Renaud Brothers are Peabody Award winning Documentary Filmmakers, Television Producers, and Journalists living and working in New York City and Little Rock, Arkansas. The Renaud’s have spent the last decade telling humanistic verite stories from the World’s hot spots. Their film and television projects have covered the wars in Iraq and Afghanistan, the earthquake in Haiti, political turmoil in Egypt and Libya, the fight for Mosul, extremism in Africa, cartel violence in Mexico, and the youth refugee crisis in Central America.

3. Renaud, Who Was Raised in Little Rock, Grew up Listening to ‘Cold War-Related Battles’ & Wanted to Go Where ‘Life Is Intense & Everything Around You Is in Motion’

Brent Renaud, a 2019 fellow, will be taking over our Instagram this week. @RenaudBrothers often covers war and conflict and directed the HBO heroin documentary “Dope Sick Love” and the Peabody award-winning series "Last Chance High."
Follow along here: https://t.co/fHzpkaY2Wu pic.twitter.com/MTIDTi5mPW

“When I was young, I used to listen to the BBC on a shortwave radio that my mom got me. There were a lot of Cold War-related battles going on all over the world at that time, particularly in South America and Asia, places that might as well have been in outer space, as no one I had ever known had been there,” Brent Renaud said in that article.

“I wanted a job that would take me to those kinds of places where history is being made, where life is intense and everything around you is in motion.”

According to Little Rock Soiree, Renaud “studied English literature and sociology at Southern Methodist University and then attained his master’s degree in sociology from Columbia University.” The brothers started their careers working as editors for Jon Alpert, a New York City filmmaker. They then created a company called 501film, and their film “Dope Sick Love” ended up on HBO, according to the outlet.

It was not immediately clear whether Renaud leaves behind a wife or children or whether he was married.

4. Renaud Worked as a Visiting Professor in Arkansas & Co-Founded a Film Festival in Little Rock

#Renaud Brothers filming in a #Newari village in hills of Nepal pic.twitter.com/EoezVv1X

In 2019, Brent Renaud was brought in as a visiting professor to the University of Arkansas. Chair of the School of Journalism and Strategic Media Larry Foley said at the time, “Brent Renaud is widely respected as a photojournalist and documentary filmmaker. His credits and body of work are solid and impactful. He’s dedicated his career to telling important stories around the world, and some of them are tragic. Yet all are about subjects we need or ought to know about.”

“Back for its seventh year the LRFF is one of the most competitive festivals in the country and each accepted film receives travel and accommodation support.”

5. The New York Times Says Renaud Was Not on Assignment for the Newspaper in Ukraine

According to a statement posted on Twitter by New York Times Deputy Managing Editor Cliff Levy, despite The New York Times press pass that Renaud was carrying, he “was not on assignment for any desk at The Times in Ukraine.”

However, the statement called Renaud “a talented filmmaker who had contributed to The New York Times over the years,” most recently in 2015.