A Houston company got into the Christmas spirit, putting together bicycles for military families at their offices on Saturday, December 18, 2021. Reynolds and Reynolds, an automotive dealership software and services provider, donated 100 bikes for military kids, according to a press release from the company.

“In the face of massive disruption to the global supply chain, Reynolds and Reynolds associates have found ways to keep their annual tradition, supplying the children of military families with bicycles for Christmas, alive,” the company said. “Delays in shipping consumer goods continue to cause issues for both manufacturers and retailers as we race toward the holiday season. Bicycles have not escaped this global problem. Major suppliers have struggled to get bikes and parts into the U.S., with many containers sitting idle on ships and in ports on both sides of the Pacific.”

The company added, “Each year Reynolds associates and their families gather to assemble the bikes for military families in early December.”

Reynolds and Reynolds said the Houston Bike Build’s organizer, Gloria Santos, “was able to secure, in small batches from various sources, 100 bikes for associates to assemble this year. It will be the 11th year in a row reaching this milestone.”

Santos said in the press release, “When our original supplier told us they wouldn’t be able to fill our order because of low supply, shipping issues, and high demand, it worried me that we would not be able to provide one small token of normalcy for the children of our military members. But after every time we received an order, I started feeling excited. Now that we have all the bikes we need, I can say I am truly relieved and grateful that we will be able to give back to our community.”

The company said, “Reynolds and Reynolds is a leading provider of automobile dealership software, services, and forms to help dealerships deliver better business results and transform the customer experience. The company is headquartered in Dayton, Ohio, with major U.S. operations in Houston and College Station, Texas, Celina, Ohio, and Tampa, Florida, as well as operations in Canada, in the U.K., and Europe.”

Santos said, “It’s wonderful. This is the best feeling. This is a way to show our children the meaning of giving. It’s a great thing every year.”

According to Reynolds and Reynolds, “This year, with the help of the United Service Organization, the US Air Force 147th Attack Wing of the Texas Air National Guard was selected to receive the bikes. … The bikes will be assembled on December 18th at Reynolds Houston office, with representatives from the 147th Attack Wing picking them up the same day.” The bikes were assembled by Reynolds and Reynolds employees and members of the Texas National Guard.

The company added, “The 147th Attack Wing, based out of Ellington Field in Houston, Texas, carries out missions as tasked by the United States Air Force and by The Adjutant General of the State of Texas. The unit flies the MQ-9 Reaper in support of combat support missions 24/7 via advanced satellite communications thus providing surveillance, reconnaissance, and air support for US and Allied forces.”

Lieutenant Colonel Danielle Hoffman, the inspector general for the 147th Attack Wing, said the gifts are going to the children of National Guard members who are deployed. “We’ve got a large number of people deployed across the world, various missions, and it’s just to give those families a little bit of an extra special holiday time,” she said. “It’s amazing to have the support of the community and just be able to help the military and civilian gap and knowing they we’re helping them and they’re helping us. It’s just very nice.”

She added, “It is tough being a military child. They never know when their parents are going to get tasked to a different mission or how long they might be gone. So being able to support the family is important for our wing and important for our mission, taking care of our Airmen. But it’s also important for the kids to know that, ‘Hey there’s someone out there that’s looking out for me and that cares about making my day a little brighter.'” 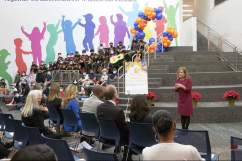 Loading more stories
wpDiscuz
0
0
Would love your thoughts, please comment.x
()
x
| Reply
Reynolds and Reynolds, a Houston automotive company, got into the Christmas spirit by building bicycles to donate to children of military families.