Kathy Allen is the wife of Delphi, Indiana, murder suspect Richard Allen, the pharmacy tech and married father who is accused in the high-profile 2017 murders of two teenage girls, Abigail Williams and Liberty German.

The girls were killed after going for a walk on a bridge near Delphia. Allen, who is also known as Ricky Allen and Rick Allen, is 50 years old and lived in Delphi with his wife, Kathy, about five minutes from the murder scene. His full name is Richard Matthew Allen.

A probable cause affidavit in the case was unsealed on November 29, 2022. It says that police knew since 2017 that Allen admitted being at the bridge that day. They also have a ballistics match and eyewitness accounts. The affidavit says that Allen’s wife told police he had a blue Carhartt jacket similar to the one worn by the killer.

Superintendent of Indiana State Police Doug Carter confirmed in a news conference on Monday, October 31, 2022, that Richard M. Allen was arrested on two counts of murder in the notorious case. Carroll County Prosecutor Nicholas McLeland revealed that Allen had been charged with the slayings of Williams, also known as Abby, and German, also called Libby, and called him a “local guy.” He said the charging document has been sealed.

There is no suggestion from authorities that Kathy Allen had any knowledge of the crime.

True crime sleuths have compared Kathy’s videos of her husband to the voice and video of the killer, which one of the victims captured at the scene.

1. Kathy Allen Frequently Posted Pictures With Her Husband on Facebook, Including One in Front of a Delphi Killer Police Sketch

Richard Allen was photographed in December 2021 in a Delphi bar with his wife sitting in front of what appears to be a police sketch of the Delphi killer.

“He would come in and we would always talk about the girls and everything,” Matlock told Daily Beast. “We would carry on conversations about it. He would say, you know, ‘It’s such a tragedy,’ and we’d say we felt sorry for the families and all that, but we tried not to talk about it too much because we all knew the families.”

Allen, who was not on the radar as a suspect in the case publicly before his arrest, has already appeared at an initial hearing and entered a not guilty plea. He will be tried in March 2023.

“Today is different. I do not want there to be any confusion or ambiguity about what I will say. Today is not a day to celebrate. But the arrest of Richard M. Allen of Delphi on two counts of murder” is a step toward a conclusion in this “long and complex investigation,” Carter said.

2. Kathy Allen Posted a Picture of the Couple’s Daughter on the Same Bridge

FacebookRichard Allen’s daughter on the bridge. Heavy blurred out her face

In 2018, Allen’s wife posted a photo of their daughter on the same bridge. Although she posted the picture that year, which was after the murders, it appears from her other pictures of the daughter that the photo had been taken some years earlier.

The daughter is now an adult, and Kathy’s page also included wedding photos of her with her parents.

Kathy and Richard Allen lived on Whiteman Drive in Delphi, Indiana, in a 3-bedroom, 2-bath home, according to property records.

Williams, 13, and German, 14, had gone for a walk on an old railroad bridge along Monon High Bridge trail near Delphi on February 13, 2017, when they were murdered, according to police. Authorities previously released a short video and audio of a man the girls encountered on the trail.

3. Kathy Allen Wrote, ‘Had a Great Weekend With My Hubby’

Judging from Kathy Allen’s Facebook page, Richard Allen was able to pull off a picture of normality, going on trips and out to play pool with his wife. Her page was active for at least a day after news of Allen’s arrest broke, but the page has since been deleted.

Kathy posted a video on Facebook in 2016 that showed Ricky sitting in a car. She wrote:

Had a great weekend with my hubby. Went Christmas shopping at Castleton Square Mall and Von Maur store is one of my favorites especially during the holidays. They have a live pianist and I love the holiday decor and atmosphere. Ricky however about fell asleep waiting for me to finish shopping, then I ‘stalked’ him out in the parking lot waiting in our car. Had a great 25th anniversary dinner at Ruth’s Chris in Carmel. Best steak EVER!

Kathy Allen’s Facebook profile read, “Live & love every day as if it’s your last. Tomorrow is not promised.” She filled her Facebook page with photos of excursions with her husband.

She posted many photos in 2018 of a trip with her husband to Gatlinburg, Tennessee. “Me and bae shootin at pool tournament❤,” she wrote with another photo showing her with Allen that year. She wrote, “Hubby and I had a great night shooting pool and spending time together at our local bar….and one of us finally got brave enough to sing Karaoke for the first time ever (and wasnt even drunk😂). And my husband has the moves like Jagger bahahahaha! 💑❤”

Some people believe that the jacket Allen is wearing in this video resembles the jacket wore by the killer they call “BG” — “Bridge Guy” — in Facebook groups.

Others have compared Allen’s gait in this fireworks video to the walk of the suspect in the video that police released.

News first broke of Allen’s arrest on October 28, when Fox59 reported that Allen was in custody.

The case was one of the most famous unsolved homicides in the Midwest. One of the girls recorded a snippet of video of the suspected killer, when they encountered a man walking on a bridge, and he could be heard mumbling “down the hill.” The case has spawned true-crime groups and podcasts; many have worked to get justice for the two girls.

4. Police Dug Near a Fire Pit at the Couple’s Home

According to Fox59, neighbors said police were “digging up a fire pit” in Allen’s backyard the week before his arrest.

The home is located “The home is a half-mile from Delphi Community Middle School, where Abby Williams and Libby German attended.”

It’s not yet clear what information led authorities to Allen. He did not appear to have a criminal history.

Carter said police wouldn’t release many details on the case and arrest at this point to preserve the integrity of the investigation. Authorities would not say when Allen became a suspect in the case. He is being held without bond.

Authorities said they sealed the criminal complaint and other records in the case because the investigation was ongoing. They said there would be a hearing to determine whether the records would stay sealed. It’s unusual for details of an arrest and crime to not come out after charges are filed.

Before the news broke about Allen, German’s sister said on social media that there was a break in the case.

On October 28, 2022, Kelsi German, tweeted, “Just know how grateful I am for all of you. No comments for now, any questions please refer to the Carroll county prosecutors office. There is tentatively a press conference Monday at 10am. We will say more then. Today is the day💜.”

5. The Allens Lived a Few Minutes From the Murder Scene

Google MapDistance from Richard Allen’s house to the bridge.

Allen lives five minutes from the bridge. Online records indicate he’s lived at the Delphi address since about 2006. He previously lived in Peru, Greenwood and Mexico, Indiana. The Delphi house was a cash purchase; it’s assessed at $142,800, online records show.

The girls were discovered near the Monon High Bridge Trail, Fox59 reported, which is part of the Delphi Historic Trails. 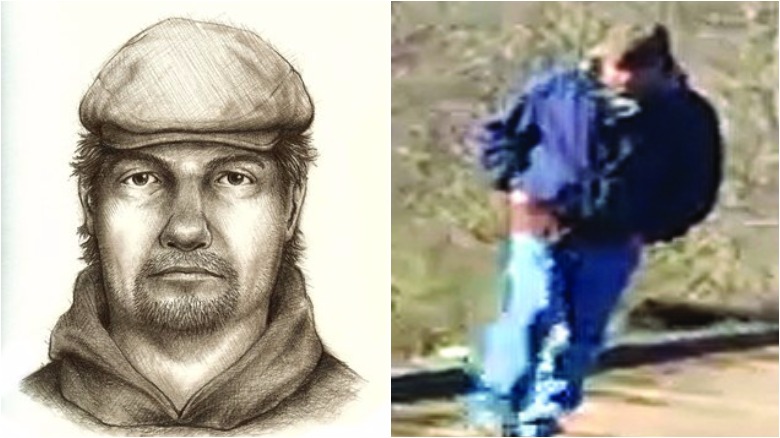 Indiana State PolicePolice in Indiana released a sketch of the man they say killed two teen girls, Abigail Williams and Liberty German, in Delphi. The suspect is seen at right in a photo taken from the cell phone of one of the victims.

Allen is a licensed pharmacy tech in Indiana, according to state records. The license was issued in February 2018, a year after the Delphi murders.

He worked at CVS, according to people who live in Delphi and have posted the information online because they’ve seen him at the store. There are screenshots in which a relative of German appears to confirm that he served them when they went to the CVS to get photographs printed for the girls’ funerals, and he gave the photos to the family for free.

WISH-TV obtained a March 17, 2017, search warrant, which was filed just over a month after the girls’ bodies were discovered.

It gave some details of the crime scene, which authorities have been tight-lipped about.

It says the bodies were “moved and staged” and that “a large amount of blood was lost by the victims at the crime scene. Because of the nature of the victim’s wounds, it is nearly certain the perpetrator of the crime would have gotten blood on his person/clothing.”

According to WISH-TV, citing the search warrant, two articles of clothing from one of the girls were missing from the scene, leading authorities to believe they may have been taken as a souvenir.

Loading more stories
wpDiscuz
0
0
Would love your thoughts, please comment.x
()
x
| Reply
Kathy Allen is the wife of Delphi murder suspect Richard Allen, the pharmacy tech and married father who is accused in the high-profile murders of two girls in Delphi, Indiana.