Shane McInerney is an Irish soccer coach who has been charged with intentionally assaulting and intimidating a crew member on a Delta Air Lines flight from Dublin to New York City. Investigators said McInerney wouldn’t wear a face mask, hit another passenger in the head with a beverage can, exposed his buttocks and refused to sit down as the plane was landing, according to an arrest affidavit. 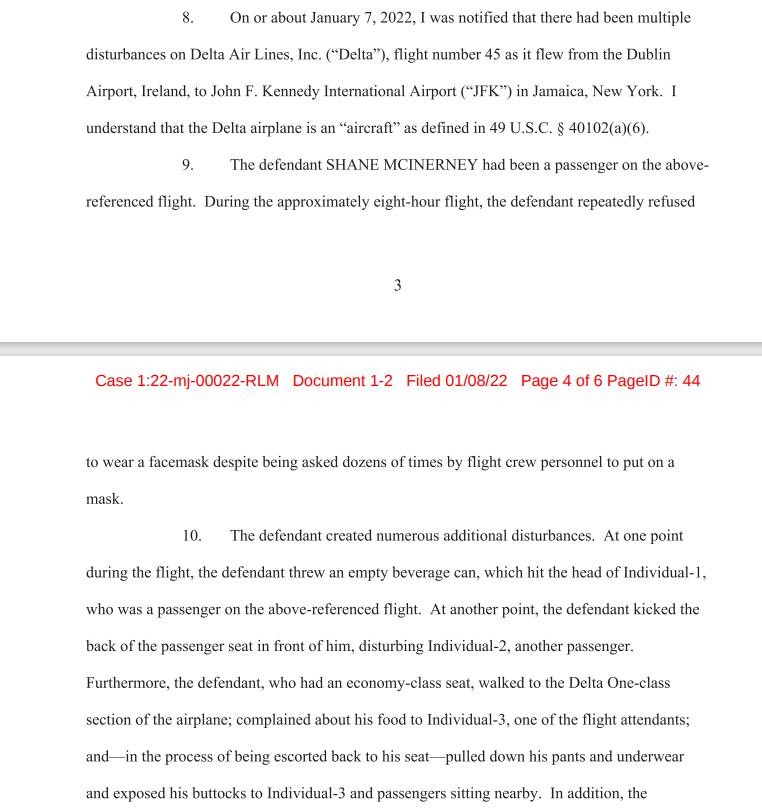 Eastern District of New YorkProsecutors say Shane McInerney refused to wear a mask and exposed himself during a Delta flight from Ireland to the U.S.

McInerney, 29, was a passenger on a Delta Air Lines flight from Dublin to New York City on January 7, 2022. Under federal law in the United States, face masks are required on commercial airplanes due to the ongoing coronavirus pandemic.

Flight attendants asked McInerney “dozens of times” to wear a mask, but he refused, according to the arrest affidavit filed in the Eastern District of New York.

McInerney was also accused of getting out of his seat and causing more problems. Prosecutors said he got up to complain about his food to a flight attendant. On the way back to his seat, investigators said, McInerney “pulled down his pants and underwear and exposed his buttocks to” the flight attendant and other passengers.

Two hours into the trip, the flight captain walked into the cabin to speak with McInerney. According to the affidavit, McInerney “put one of his fists close to” the pilot’s face and said, “Don’t touch me.” Twice, he took off his own hat and put it on the captain’s head, investigators said.

As the plane prepared to land in New York, prosecutors said, McInerney stood in the aisle and refused to sit down.

2. McInerney Could Face Up to 20 Years in Prison if Convicted

What started off as a bored Irishman in lockdown in Ireland ordering a football and a kicking stick online back in February. Fast forward four months and today I’ve signed a full scholarship to be a kicker at Peru State College. Can’t wait for this next chapter ✍️👊🏻🏈 #football pic.twitter.com/xiO8IhQBGU

According to the affidavit, the flight crew “considered diverting the airplane to another airport to remove” McInerney but ultimately decided against it. Officials with the Port Authority of New York and New Jersey took McInerney into custody after the plane landed in New York.

The New York Post reported he was “admitted to Jamaica Hospital for medical and psychological evaluation after the flight landed.”

McInerney has been charged with intentionally assaulting and intimidating a member of a flight crew. That charge carries a maximum sentence of 20 years in prison if convicted, as explained by Cornell Law.

McInerney’s attorney is Benjamin Yaster with the Federal Defenders of New York, according to an online database of federal court records. In a brief phone call with Heavy on January 25, Yaster said he had no comment on the case.

3. McInerney Was Released on Bond but Had to Surrender His Passport 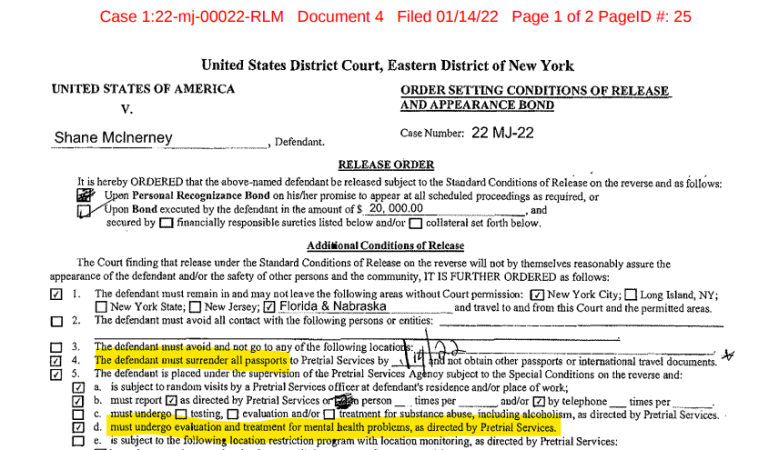 McInerney appeared before a judge in the Eastern District of New York on January 14. Court documents show he was released on a $20,000 bond. He was ordered to surrender his passport.

McInerney is allowed to travel to New York City, as well as to Florida and Nebraska, according to the conditions of release.

4. McInerney Coaches Children & Was Traveling to Florida for a New Coaching Job 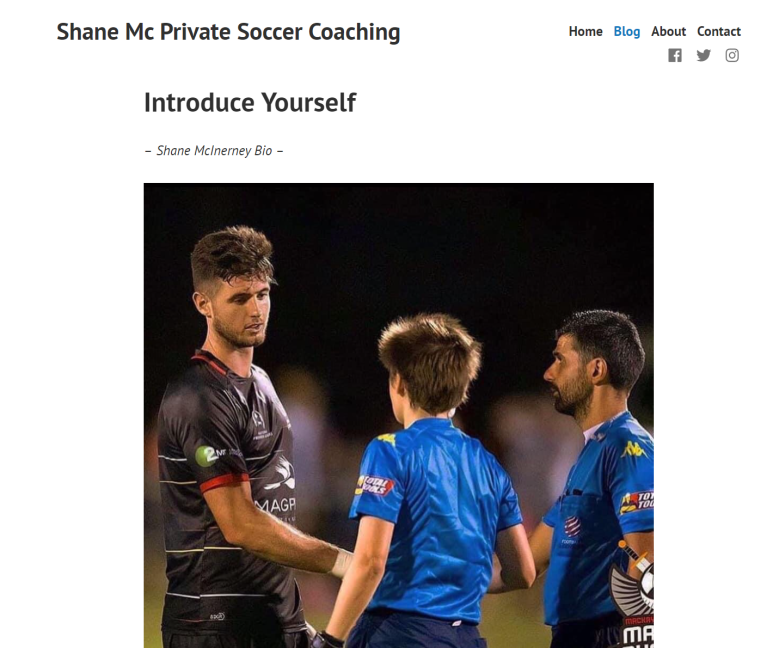 According to his website, McInerney is a children’s soccer coach. He noted on his website that he has coached boys and girls as young as 9. The site includes team photos.

McInerney is originally from Galway, Ireland, according to his Facebook page. He was flying to the U.S. for a job teaching soccer at an academy in Daytona Beach, Florida, the Daily Mail reported, citing a law enforcement source. The Delta flight from Ireland to New York City had been just the first leg of his trip.

McInerney arrived in Daytona Beach two days after his first court appearance, according to an Instagram post cited by the Daily Mail. The outlet reported that McInerney posted a photo sitting near the beach with a drink in his hand, along with the caption, “Great to be back in the sunshine state. Blessed to call this place home for the next few months.” McInerney has since made his Instagram account private.

Instagram/@shanemcinerney_Shane McInerney was traveling to Florida for a new job when he was arrested and charged with intentionally assaulting and intimidating a member of a flight crew.

McInerney has spent a significant amount of time in the United States. He played soccer at Monroe Community College in Rochester, New York, and at Keiser University in West Palm Beach between 2012 and 2016, according to his website.

McInerney has played pro soccer in Sweden and Australia, according to the Irish Daily Star. He also played with the Jacksonville Armada pro soccer team in Florida in 2018 and worked as a model in Miami, the Daytona Beach News-Journal reported.

Thanks for the article, excited to see what the future holds as a kicker 👊🏻🏈 @KCsixtyseven @IsFearrAnStar #football #kicker #collegefootball #nfl #cfl #xfl #usfl pic.twitter.com/Q7mHpdWpJG

He told the Irish Daily Star that he started practicing kicking an American football during pandemic lockdowns in Ireland. He told the newspaper in December 2021 that he hoped to pursue a career as an NFL kicker.

In 2021, he attended Peru State College in Nebraska and was the kicker on the football team. He was named as the Heart of America Athletic Conference Special Teams Player of the Week twice during the season, News Channel Nebraska reported.

READ NEXT: Who Is Ryan Seacrest’s Model Girlfriend?

Loading more stories
wpDiscuz
0
0
Would love your thoughts, please comment.x
()
x
| Reply
Shane McInerney is an Irish soccer coach facing charges after prosecutors said he refused to wear a mask, exposed his buttocks & hit another passenger with a drink can on a Delta flight.