Slovakian Anastasiya Kuzmina, 29, won the gold medal for the 7.5 kilometer biathlon, a mix between cross country skiing and rifle shooting. This was Kuzmina’s second gold medal in the same category from when she took home Gold at the 2010 Vancouver Olympics.

Russia’s Olga Vilukhina, 25, won her first Olympic medal, taking silver. Her husband, Valery Ivanov, is another Olympic athlete who competed in the 1998 Winter Olympics in Nagano.

Comment from Olga Vilukhina on her medal: “The dream of the 10-year-old girl Olya came true” http://t.co/VlSoZjY491 pic.twitter.com/8TYrlhzwvO

Ukraine’s Vita Semerenko, 28, won the bronze medal which is also her first Olympic medal, though she also competed in the 2010 Vancouver Olympic games. This was Ukraine’s first medal at the Sochi Olympics.

For more gold medal winners, read the posts below. 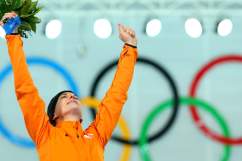 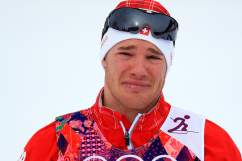