Irene Wust, 27, from the Netherlands won the gold medal today at the Sochi Olympics for the ladies’ 3000 meter speed skating.

2. Martina Sablikova from the Czech Republic Won the Silver Medal

Former gold medalist in the 2010 Vancouver Olympics Martina Sablikova, 26, walked away with the silver medal today. This is her fifth medal from the Olympic games combined.

From left to right, Silver medallist Martina Sablikova of the Czech Republic, gold winner Ireen Wust of the Nethe… pic.twitter.com/v2bppB2pXN

Winning her first medal ever was Olga Graf, 30. This was also the first medal given to Russia for the Sochi Olympics.

Check out pictures of all the Gold Winners so far below. 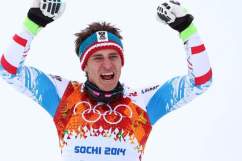 Sochi Gold Medal Winners: All the Photos You Need to See