Sharlee Jeter, the younger sister of legendary New York Yankees star Derek Jeter, is touring the country for the release of her new book: “The Stuff: Unlock Your Power To Overcome Challenges, Soar, and Succeed.” The book details her battle with Hodgkin lymphoma, and just how hard she fought to overcome cancer.

The 37-year-old author outlines the challenges she faced, her spitfire determination to finish college while undergoing chemotherapy treatment at Manhattan’s Memorial Sloan Kettering, and just how long and arduous the seven month journey to recovery was.

Here’s what you need to know about Sharlee Jeter:

1. She is the President of Derek’s “Turn 2 Foundation,” an Organization Dedicated to Helping Youth Stay Away from Drugs

Derek Jeter and his father, Charles Jeter, founded the Turn 2 Foundation in order to encourage younger people to stay away from drugs and alcohol and to pursue healthy living. Jeter began the foundation in 1996, just as he started establishing himself as one of baseball’s stars.

When Sharlee was 18, she started dedicating her time to the cause and was put on the Board of Directors. Today, she is the president of the organization.

While enrolled in college, she continued to work at the organization during her breaks and eventually joined Turn 2 Foundation full time after she graduated. She became the program director, opened up projects for less fortunate youth in rough areas like the Bronx and continues to work around the New York City area today where she lives with her son. She became an invaluable asset to the organization and worked her way up to President by pushing for projects that would expand the foundation and make it extremely successful.

The foundation has also invested in Stop!t, an app designed to help children fight cyber bullying. Sharlee backed the decision in 2014. The app works by helping children anonymously report bullying.

“None of us can relate to this social media frenzy going on — it wasn’t when we were in school,” Sharlee told The New York Daily News. “For Derek, social media is kind of a foreign world — he’s said it many times. But he knows how powerful it is, how it’s consumed our youth. I’m not sure I would’ve been able to handle that kind of bullying and abuse when I was younger and I came from a wonderful home. You have outside forces now even penetrating into your safe home.” 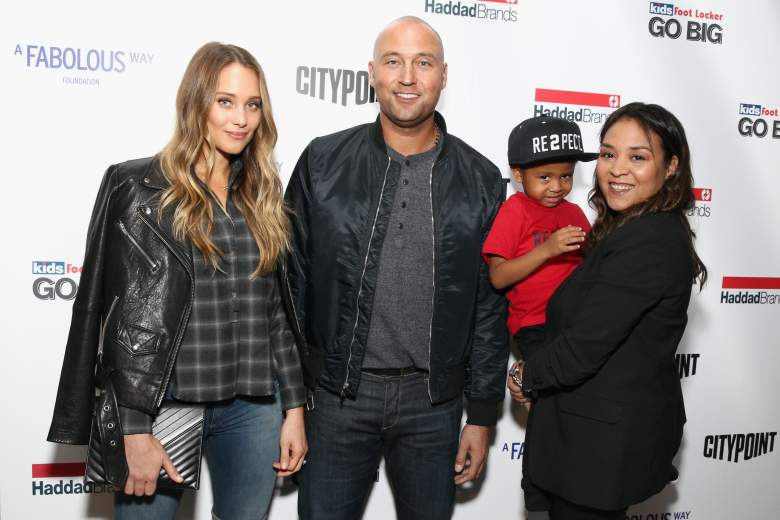 Sharlee Jeter with her son, her brother Derek and sister-in-law Hannah Davis. (Getty)

Jalen Jeter, Sharlee’s son, was born in 2012. The details of his birth were kept private, as well as the name of Jalen’s father.

Jalen’s uncle Derek serves as an important father figure to Jalen and is constantly seen playing with his nephew. He was frequently seen during Jeter’s farewell tour in 2014.

Jalen now has a cousin to play with, since Derek and his wife Hannah gave birth to their first daughter in August, 2017.

Sharlee Jeter used to date rapper Skyzoo before their split in 2010 when the couple called off their wedding. Despite popular belief, Jalen is not Skyzoo’s son and no sources have information as to who the father is. Sharlee and Skyzoo stopped seeing each other after the split in 2010.

In a 2012 radio show interview, Skyzoo insisted that he never wanted to use his relationship with Jeter’s sister to gain fame.

“I just kept it low, I never really wanted to use that the way the average dude man have … and that’s why they rocked with me so heavy,” Skyzoo told RapFix Live. “When we were rockin’, Derek was lookin’ at me like a little brother, reason being he could trust me. I wasn’t out there puttin’ it on blast it is what it is.”

In November 2000, Sharlee was diagnosed with Hodgkin lymphoma disease, according to The New York Times. The disease is a type of cancer that originates in the white blood cells and requires radiation as a cure.

“Hodgkin Lymphoma cancer starts when cells start to grow out of control,” according to the American Cancer Society. “Cells in nearly any part of the body can become cancer, and can then spread to other parts of the body.”

Derek didn’t tell the media until she was cured of the disease. In fact, he said he only revealed it because “now it’s a success story.”

“Our family is not immune to anything that goes on in society,” Jeter told the Times. “We never expect nothing like this to hit our family. It’s just one of those things you have to deal with and, fortunately, it’s over with.”

Jeter had a rough start to the 2001 season, but Jeter never blamed his rocky start to his sister’s illness.

4.  She is Currently on Tour Promoting her Book “The Stuff,” which Details her Battle with Cancer

Sharlee was a senior at Atlanta’s Spelman College when she received the life-altering news that she had cancer. It was November 2000, and the then-20-year-old college student was diagnosed with Hodgkin lymphoma after noticing a lump in her neck.

According to the New York Post, her parents Dorothy and Charles Jeter expected Sharlee would put her life on pause and return to the safe haven of their New Jersey home.

“My parents just assumed [I’d quit school and come home],” Sharlee tells The Post. “I remember my mom pleading with me, saying, ‘I’ll renovate the entire downstairs. It will be your apartment. You can come and go as you please.’”

However, Sharlee had other plans. She was determined to finish college, and continued to split her time between commuting to New York every other Thursday to undergo chemotherapy treatment and continuing her classes.

She details the entire ordeal in her new book, “The Stuff: Unlock Your Power To Overcome Challenges, Soar, and Succeed,” co-written with her friend Dr. Sampson Davis.

It was a painful, difficult time of her life she says, according to the New York Post. However, she was ultimately declared cancer-free seven months later, in May 2001.

She credits her recovery to her incredible team of doctors and support. Her oncologist, Dr. Stephen Nimer, helped her convince her parents to allow her to execute her plan. According to the Post, “her family and close friends also supported her: Her brother called her daily, while her parents were at every doctor’s appointment. Some of her pals even passed up a spring-break trip so she wouldn’t be left out.”

5.  Sharlee was a Softball Star in High School Alongside Brother Derek, Who Grew Up Very Close with his Sister

NEW YORK – SEPTEMBER 21: Derek Jeter #2 of the New York Yankees poses with his family, father Charles mother Dorothy and sister Sharlee,during pregame ceremonies prior to the start of the last regular season game at Yankee Stadium between the Baltimore Orioles and the New York Yankees on September 21, 2008 in the Bronx borough of New York City. The Yankees are playing their final season in the 85 year old ball park and plan on moving into the new Yankee Stadium across the street to start the 09 season. (Photo by Jim McIsaac/Getty Images)

Sharlee and Derek grew up in Kalamazoo, Michigan and attended Kalamazoo Central High School. There, Sharlee and Derek both excelled on the ball field. The two had been close since they were kids. In an interview with ESPN, Jeter said his first memory was the moment Sharlee was born.

“So, you know, someone asked me an interesting question one time when I was playing, they said, what’s your first memory? And they say that your first memories usually come about when you’re 4 to 5 years old,” Jeter told ESPN. “Mine was when my younger sister was born. It’s the first thing I can remember. But as far back as I can remember, in terms of baseball, is I wanted to be a Yankee.”

In a 2014 New York Magazine interview, Sharlee said their parents always thought Derek had a lot of confidence growing up, which is why their mom nicknamed him “old man.”

“I think the nickname came from the first time he went off to school and he had his little briefcase and he was all dressed up in a little suit,” Sharlee told the magazine.

Their father Charles played shortstop for Fisk University in Tennessee too.