The Williams sisters are arguably the most accomplished siblings in the history of modern sports, but their legacy goes far beyond their championship trophies, Olympic gold medals, and weeks at No. 1 on the WTA rankings.

Together, they have revolutionized tennis and given hope to an entire generation of young players who don’t fit the typical mold of what a tennis player “should be.”

Here’s what you need to know about the sisters: The last time Venus beat her younger sister before Saturday was more than five years ago, at the Barclays Dubai Tennis Championships in 2009.

2.  Venus Has an Autoimmune Disease Venus has been battling Sjorgen’s Syndrome since 2011. Although there have been times when her condition has left her unable to compete, she has managed to remain one of the WTA’s top ranked players. With a win against her sister, Venus would secure a ranking of no lower than 19th in the world, her highest since contracting her illness.

3.  The Williams Sisters are Roommates At over 6500 square feet, it’s not exactly close quarters… but Venus and Serena do still live together in Palm Beach Gardens, Florida. Click here to check out their beautiful home.

4.  Venus Has Never Won the Championship in Canada In fact, this is the first time in her long career that she is even playing in Montreal. Serena, on the other hand, has won the title 3 times, including last year in Toronto.

5.  The Williams Sisters Have Won 126 Titles Serena has won 60 singles titles, while Venus has won 45. Combined they hold 25 Grand Slam titles (16 for Serena and 9 for Venus), and 21 doubles titles. 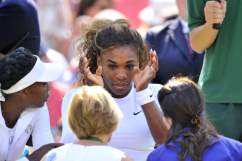 Is Serena Williams’ Dominance in Women’s Tennis Coming to an End?