The big plays just kept coming Thursday night for the Atlanta Falcons, and Julio Jones was at the middle of several of them.

None was more impressive than this diving catch Jones made for a 40-yard touchdown reception from Matt Ryan. It was the second touchdown catch of the night for Jones, and it extended Atlanta’s lead to 42-0 en route to one of the biggest rout so far this year in the NFL. 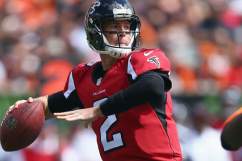 Read More
Football, NFL
Julio Jones made a spectacular diving catch for a touchdown Thursday night that extended the Falcons' lead over the Bucs to 42-0.