Megan Brown started dating Dan Mullen when Mullen was a low-profile assistant at Bowling Green State University in Ohio and Brown was a sports anchor at the NBC affiliate in Toledo.

Things have changed quite a bit since then.

Read on for more about Megan, her marriage to Dan and the long road that led the couple to Starkville.

1. Megan Was a Pioneering TV Anchor in Ohio

In the early 2000s, Dan Mullen was the quarterbacks coach at Bowling Green — an anonymous assistant at a low-profile school in the mid-major Mid-America Conference. Megan Brown was the more well-known of the two, and it wasn’t even close.

As the Toledo Blade wrote in 2002, Brown was a weekend sports anchor at WNWO TV in Toledo. At the time, the Blade notes, she was the first woman in the Toledo market to be hired as a sports anchor.

West, 25, is the first female to be the “No. 2” sports person for a Toledo television station. She was the first female to be hired locally as a sports anchor. (WTVG has had two females, Andrea Pacione and Katie Pollick, work in its sports department and WTOL one, Jerey Libman, but they were primarily reporters, not anchors.) According to Ball State University professor Bob Papper, who compiles statistics for the Radio-Television News Directors Association, there are “no more than 60 or 70” female sports anchors in the nation.

Megan’s place in the local sports scene was prominent enough that Mullen developed a crush on her just from watching her on TV, and her on-air role was what kick-started their relationship.

2. Dan Asked Megan Out in an Email He Sent to Megan’s TV Station

The Hail State Beat, the official blog of Mississippi State athletics, has the story of how the Mullens’ first date came about.

According to the blog, Mullen had WNWO on one night in his apartment when Megan caught his attention.

From the Hail State Beat:

“She was on the news,” Dan recalled, “and she said, ‘If you have any comments, email the station.’ I thought, ‘Hey, she’s a good looking girl.’ So I just casually wrote, ‘Hey, I’d like to take you out sometime.’ To tie it together, I said I was the quarterbacks coach at Bowling Green.”

Young Megan got the email, and because it was a station address, so did her director who read the entire thing to the newsroom, everyone laughing as he went, Megan somewhere between embarrassment and laughter of her own.

When Dan’s first email went unanswered, he followed up with another, making it clear, as the Hail State Beat reported, that he wasn’t a “stalker.”

Eventually, Megan agreed to lunch, but Dan insisted instead on dinner, and the two met at a Mexican restaurant in Toledo for their first date.

Looking for MSU apparel? Check out the Bulldogs fan shop.

Megan is most often associated with football these days, but the sport that drew most of her attention was golf. The Blade reported that her father owned a golf course growing up in Butler, Pennsylvania. And according to a 2011 profile in the Starkville Daily News, Megan captained her high school golf team.

Her interest in golf paid off when she was offered a spot as an anchor on the Golf Channel, just before she and Dan got married and just after Dan had moved with Urban Meyer from Utah to Florida, where Dan served as the offensive coordinator on the Gators’ 2006 national championship team and helped develop the spread offense in which Tim Tebow became a superstar.

Megan’s career in golf is over, but she still knows her way around a golf club. She stars in the promotional video above from the Reynolds Plantation, which counts golf and tennis among the array of activities offered to members.

4. Megan Liked Starkville Enough That She Convinced Dan to Accept the MSU Job

According to the Hail State Beat, one of Megan’s Golf Channel assignments proved vital to Dan’s decision-making process when the then-lowly Bulldogs offered Dan their head coaching job in 2008.

Ahead of one weekend, Megan asked her bosses if she could have a few days off to travel with the football team for a game. Usually, Megan stayed local, but as a compromise to give her an extended weekend, they sent her to a U.S. Women’s mid-amateur at a place called Old Waverly in West Point, Mississippi.

After the tournament at Old Waverly, the blog reported that Megan made the short drive to Starkville for dinner. When years later, Mississippi State offered Mullen the job before he’d ever stepped foot in Starkville, Megan convinced him to take the job.

As Megan told ESPN’s College Game Day in a feature on SEC coaches’ wives, she’s known to the Bulldogs’ players as “Mama Mullen” — a comforting presence who worries about players’ emotional well-being after tough practices run by her husband.

Megan and Dan have two children — Canon and Breelyn Elisabeth — but as Megan told the Starkville Daily News, she views herself as the mother of all of the Bulldogs’ players.

From the Daily News:

“I love it,” Megan said. “I wouldn’t trade it for the world. I love them all a lot. I want them to know that someone cares for them. Some need it more than others.”

When they get off the bus, she says something encouraging to each team member. Each comment is unique to the player and what they may be facing that particular day.

“For some, it may be their first SEC game and they are anxious about it,” Megan said. “For another, they may have lost a grandparent that week. I really believe this is my calling. I see them every day and I know what they are going through.” 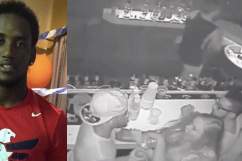