LSU quarterback Anthony Jennings will lead the Tigers against No. 5 Alabama Saturday night.

Here’s what you need to know about LSU’s signal-caller.

1. He Wasn’t Expected to Start this Season

Even though Jennings entered the season as the only LSU quarterback with any game experience after the departure of former quarterback Zach Mettenberger, true freshman Brandon Harris came in with all the hype with many believing he’d be the answer for the Tigers.

But Jennings has started all but one game for the Tigers, and appears to be the answer.

2. After a Rough Start, Jennings Has Been Strong

Jennings had some struggles early on this season and is completing just 50 percent of his passes. But he’s been efficient in the Tigers last three games, all of which have been wins.

On the year, Jennings has thrown for 1,190 yards and eight touchdowns.

“I do think Anthony Jennings is playing really, really well,” Alabama coach Nick Saban said earlier this week. “A good decision-maker who hasn’t made a lot of mistakes. I think that’s one of the reasons they’ve played a lot better.”

Jennings saw action in nine games as a true freshman in 2013, which included a start vs. Iowa in the Outback Bowl. With the start, he joined Jordan Jefferson (2008 Chick-fil-A vs. Georgia Tech) and Herb Tyler (1995 Independence Bowl vs. Michigan State) as only true freshmen quarterbacks in LSU history to start a bowl game. Prior to starting the bowl game, he led LSU to last-minute win over Arkansas in regular-season finale when Mettenberger went down with an injury.

4. He Was a High School Standout

Jennings was first-team all-state in Georgia as a junior and honorable-mention all-state as a senior. While in high school, he threw for 2,187 yards and 19 touchdowns while running for 500 more as a junior. As a senior, he threw for 800 yards before suffering a season-ending injury.

5. His Father Played at Georgia

Jennings’ father, Will Jennings, played defensive tackle for the Georgia Bulldogs from 1990-93. Growing up, Jennings lived with his mother, Teneshia Raine, as her and Will Jennings never married, but still had a relationship with his father.

Even in youth league football he showed a feel for the game, which led his coaches to put him at quarterback with his father urging him on. He would help other players get lined up before taking a snap and was serious about playing the position.

“He never got real emotional even at that age,” Will Jennings told NOLA.com. “He took things in stride. I taught him the stuff I knew about football but he had a knack for handling things when he got in the game.” 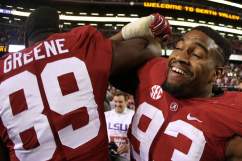