It was all smiles after the game for Alabama after the Crimson Tide came back to beat LSU in overtime. (Getty)

With its playoff hopes on life support Saturday night in Death Valley, Alabama came up big.

Blake Sims led the Crimson Tide on a game-tying drive in the final minute and Alabama scored a touchdown on its first possession of overtime before coming up with a game-clinching stop on defense and edging LSU 20-13.

The win sets up a showdown next week against top-ranked Mississippi State with first place in the SEC West on the line.

Here is a link to stats. Read on for a recap.

Alabama Took the Lead in Overtime, Then Got a Stop to End It

Alabama scored on its first possession of overtime when Blake Sims hit DeAndrew White on a perfectly thrown lob in the endzone, capping a drive that featured Derrick Williams as the primary ball-keeper after TJ Yeldon left the game with an injury.

The Tide defense then stopped the Tigers on the ensuing possession, knocking the ball down after Anthony Jennings had heaved it into the endzone on fourth down.

Blake Sims Led a Game-Tying Drive in the Final Minute

That was a sensational drive by Blake Sims. #clutch

With Alabama on the ropes following LSU’s go-ahead field goal, Blake Sims engineered the biggest drive of his career, leading Alabama down the field in 47 seconds to set up a 27-yard Adam Griffith field goal to tie the game with 3 seconds left, sending the game to overtime.

Griffith had missed 5 of his last 7 attempts, including one from 27 yards out in the first quarter that bounced off the left upright. But his kick was good when it counted most, tying the game at 3.

The drive was made possible in part because LSU’s kickoff went out of bounds, giving Alabama the ball at the Tigers 35 to start the drive.

The Crimson Tide had the ball deep in their own territory with less than 2 minutes left and were trying to mount a game-winning drive or at the very least to get the ball away from their own endzone to get the game into overtime.

Instead, star Alabama running back TJ Yeldon fumbled after he appeared to grimace in pain while being tackled. LSU recovered and took over at the Tide 6-yard-line, making a go-ahead field goal all but inevitable.

The Tigers cashed in and took a 13-10 lead on a 39-yard Colby Delahoussaye field goal with 50 seconds left.

Alabama Took the Lead in the 2nd Quarter

After a rocky first quarter, Alabama settled down in the second quarter. The Crimson Tide tied the game at 7-7 when quarterback Blake Sims hit Amari Cooper for a 23-yard touchdown pass with just over five minutes left in the half. Then, right before halftime, Adam Griffith hit a 39-yard field goal to give the Crimson Tide a 10-7 lead at halftime.

LSU struck first when quarterback Anthony Jennings (pictured above) hit wide receiver Matt Dupre in the corner of the end zone for a 14-yard touchdown pass. While Dupre was making the catch, he was grabbed in the facemask by the Alabama defender, but was able to hang on for the catch.

It’s a chance for No. 16 LSU (7-2, 3-2 SEC) to get back into the thick of an SEC West race. By beating the No. 5 Crimson Tide (7-1, 4-1), the Tigers could start a domino effect of two-loss teams in the country’s best division. They’d also have a glimmer of hope in the playoff race that once seemed unattainable.

For Alabama, win out and the Tide are headed to the SEC championship game and the playoff. Saturday would be a strong start in that quest.

“The players understand that this is always a big game for us,” Alabama coach Nick Saban said. “It’s turned into a rivalry game for us.” 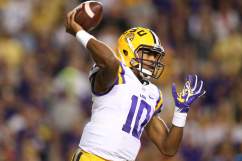