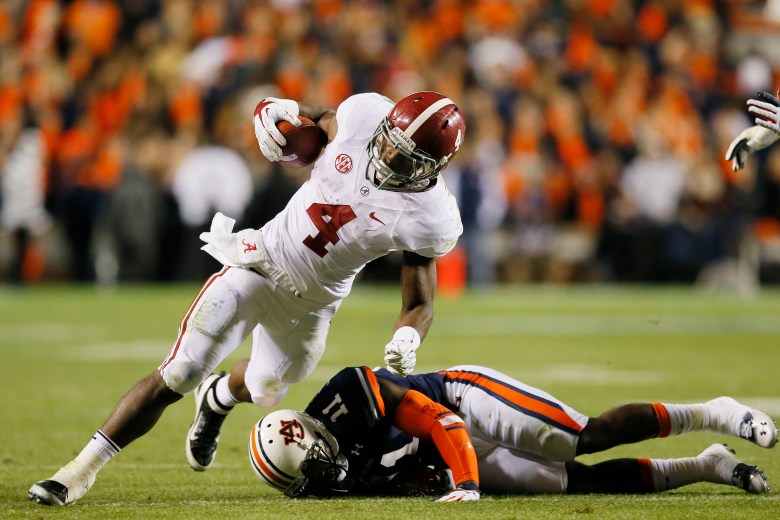 Head coach Nick Saban and his Alabama Crimson Tide team are in a familiar position – ranked No. 1 in the nation and in control of their own destiny to the College Football Playoff.

But when it’s Iron Bowl week and Auburn is in town, everything goes out the window.

Last season’s game is all the proof you need. Alabama was again No. 1 and playing at Auburn, which was No. 4 at the time. Tied at 28, the Crimson Tide were attempting a 57-yard field goal on the game’s last play. It fell short, Auburn’s Chris Davis caught it deep in his own end zone and returned it 109 yards for the improbable game-winning score. Auburn 34, Alabama 28. The Tide’s dream of another championship season turned into a nightmare and the Tigers made the BCS title game, but fell to Florida State.

Here’s what you need to know about this year’s Iron Bowl:

If you’re familiar with Auburn head coach Gus Malzahn, you know what he’s bringing to the table: offense. And a lot of it. The Tigers feature a run-heavy scheme, led by running back Cameron Artis-Payne (1,405 yards and 11 touchdowns) and quarterback Nick Marshall (731 yards and 11 touchdowns). Their rushing offense ranks eighth in the nation at 266.2 yards per game.

Marshall has also accounted for 1,859 passing yards and 15 TDs. And Saturday he’ll get back No. 1 receiver Duke Williams, who has missed the past 2 games after injuring his knee in a loss to Texas A&M on Nov. 8. Williams has hauled in 38 passes for 609 yards and 5 touchdowns. Sammie Coates has also shown the knack for the big play, averaging 20.4 yards on 25 receptions.

Auburn averages 35.1 points per game. Defensively, the Tigers give up 23.5 points per contest.

The Tigers boast the third-best red zone defense in the nation, allowing 31 scores (23 touchdowns, 8 field goals) in their opponents’ 45 trips inside the 20. Jonathan Jones leads the team with 5 interceptions and Cassanova McKinzy has totaled 80 tackles (52 solo).

Punt returner Quan Bray is second in the nation with a 18.1 average.

What Malzahn is to offense, Saban is to defense. Once again Alabama is among the nation’s top units. The Crimson Tide allows 14.5 points per game (2nd in the nation), 283.5 yards per game (5th) and 85.3 rushing yards per game (2nd). Reggie Ragland has racked up 83 tackles (41 solo) and Xzavier Dickson’s 7 sacks lead the defense, which has two shutouts this season (41-0 over Florida Atlantic and 59-0 over Texas A&M).

Under the direction of offensive coordinator Lane Kiffin, the Crimson Tide run a balanced attack. Senior quarterback Blake Sims has tossed 20 touchdowns and just 4 interceptions while throwing for 243.3 yards per game. His top target is Amari Cooper, who is among the nation’s leaders in receptions (90), yards (1,349) and touchdowns (11). Cooper left the last game with a bruised knee but is expected to play Saturday.

The Tide’s running game has received a boost from Derrick Henry, who has rushed for 5 touchdowns in the past 5 games. He has a team-leading 7 TDs and his 682 yards are second on the team to T.J. Yeldon, who has 758 yards and 6 scores.

Alabama scores 35.0 points per game and is coming off a 48-14 win over Western Carolina. The Tide has a 15-game home winning streak, tied with Baylor for the longest in the FBS.

A win clinches the SEC West for the Tide.

There won’t be a miracle ending to this year’s Iron Bowl. But, as per usual in this rivalry, the game will provide some excitement until Alabama proves to be too much for the slipping Tigers. The balanced offense, swarming defense and home crowd at Bryant-Denny Stadium give the edge to the Crimson Tide. Nick Saban has his team trending in the right direction at the right time. The Tide wins and punches their ticket to Atlanta for the SEC Championship. 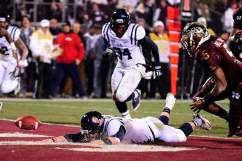