Tom Brady has made a whole lot of money throughout his 15-year career both on and off the field. In fact, as Business Insider points out, the Patriots quarterback has already made almost $155 million, with three years and $22 million left on his contract.

But Brady, who signed an extremely team-friendly contract extension before the 2013 season, makes substantially less during his current deal than other elite quarterbacks, and nowhere near as much as Peyton Manning, who’s in the middle of a five-year, $96 million deal and who’s made more money than any other player in NFL history.

Manning is 26th on Forbes’ list of the top 100 highest-paid athletes of 2014. Brady’s teammate Darrelle Revis is 40th on the list, and fellow Boston sports star David Ortiz is 80th.

The list includes over-the-hill baseball players such as Johan Santana, Matt Kemp, Ryan Howard and Vernon Wells and defensive lineman such as the Bengals’ Carlos Dunlap, but Brady didn’t make the list. 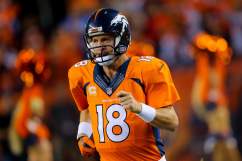