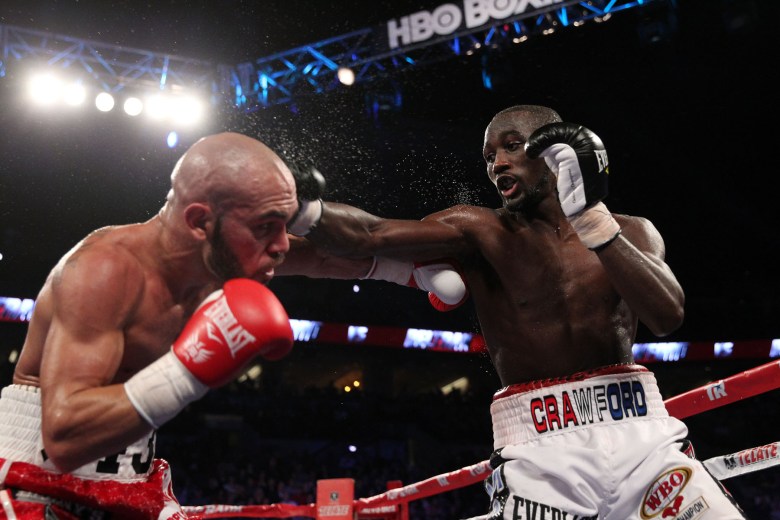 Terence Crawford defeated Raymundo Beltran by unanimous decision and retained his WBO lightweight title on Saturday in front of a hometown crowd in Omaha, Nebraska.

Beltran (29-7-1, 17 KOs) kept constant pressure on the champ and had Crawford working off his back foot for most of the night. But he was unable to get past Crawford’s right jab, which by the second half of the bout had the Mexican brawler befuddled and out of ideas.

Crawford, 26 years old, started the fight in an orthodox stance, but opted for a southpaw stance from the second round on. From that point Crawford had Beltran figured out; landing jabs at will, avoiding counters, and occasionally clinching himself out of tight spots along the ropes and in the corners.

Crawford Dominates Beltran: The Pictures You Need to See

This was Crawford’s second title defense after dethroning Ricky Burns in the Brit’s hometown of Glasgow, Scotland in March. In his first title defense, Crawford upset Olympian gold medalist Yuriorkis Gamboa by knocking him down four times en route to a ninth-round stoppage in June, also at the CenturyLink Center in Omaha.

Raymundo Beltran, 33, came into Saturday’s fight having decisioned Afghan Arash Usmanee in April. Prior to that, Beltran had taken his own shot at Scotsman Ricky Burns when they met September 2013 in Glasgow. But despite breaking Burns’s jaw, exposing him over the course of 12 rounds, and even dropping him once, Beltran was robbed of a decision and denied ownership of the WBO title currently held by Crawford.

Saturday’s fight opened with a non-eventful feeling-out round, with both protagonists standing off in the middle of the ring and testing each other’s timing, reflexes, and reach. Crawford immediately showed a clear hand-speed advantage. Half way through the round, Beltran began to impose himself and apply forward pressure on the champ. The challenger was cutting the ring off effectively.

The second round started off at a faster pace, both fighters vying for positioning and Crawford effectively working the jab. Crawford switched to a southpaw stance and stayed this way for the rest of the fight. This strategy has worked for Crawford in the past and tonight it made all the difference, as the game Beltran had no answer for Crawford’s right jab and fancy footwork, and Crawford treated the 11,127 fans that packed the CenturyLink Center to a boxing masterclass.

Beltran continued to press Crawford for the rest of the bout, but was unable to mount any kind of substantial offensive against the limber hometown hero.

The seventh round saw a role reversal, with Crawford going on the hunt and stalking Beltran around the ring. Beltran struggled to regain control of the geography, but Crawford’s pace and accuracy did not give him a chance to get off or make any real impact.

Crawford turned up the heat at the end of each of the 10th, 11th, and 12th rounds– cornering Beltran, letting his hands fly, and trying to close out the show. But Crawford ran out of time and we went to the score cards.

Raymundo Beltran had not lost a fight since being defeated by Luis Ramos Jr in 2012. After 15 years as a prizefighter, Beltran will have to continue his quest for what has proven to be an elusive world championship title.

Asked by HBO’s Max Kellerman if this was his last fight at 135 pounds, Crawford answered without hesitation, “This is it.”

Look for the “Pride of Omaha” to next campaign as a junior welterweight against the likes of Lucas Matthyse, Lamont Peterson, Ruslan Provodikov, or even the mighty Pacquiao.

On the undercard Evgeny Gradovich and Jayson Velez fought to a draw in a 12-round slugfest.

Beltran Picked Up the Intensity Late in the Fight, but Crawford Was Still in Control

Good action in rd 10. Crawford rd and he is up 9-1. #boxing #CrawfordBeltran

Like how Crawford is pumping the jab, shuts down Beltran #CrawfordBeltran

Beltran has to know that he's in Crawford's hometown. Gotta keep throwing Crawford off his game and get a visible advance! #CrawfordBeltran

5-0 Crawdaddy. Beltran not fighting badly but Crawford that much better. #boxing #CrawfordBeltran

Crawford has great footwork..especially being able to switch from orthodox to southpaw with the same effectiveness #CrawfordBeltran #boxing

Crawford is winning the fight, but don't sleep on Beltran's power. It only takes 1 second to get caught. #CrawfordBeltran

Beltran Landed a Big Right Hand in Round 3, but Crawford Answered

good adjustment that round by Crawford. Stopped letting Beltran step around his right foot & throw the lead left. #boxing #CrawfordBeltran

Beltran had a one HARD shot on Crawford this round. Not enough to win round tho, Bug countered with hard hook. 3-0 Bug. #CrawfordBeltran

HAAA Crawford ANSWERS the big punch and Beltran looked like he pissed off a tiger! Crawford's round! 30-27 #CrawfordBeltran #boxing

Crawford Had a Slight Advantage in Round 1

Not much in rd 1 but edge to Crawford. #boxing #CrawfordBeltran

Crawford turned it up last half of the last third.

Cautious first round. Slight edge for Crawford, Beltran did almost nothing. #CrawfordBeltran 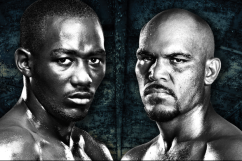