Less than a month after Ray Rice’s indefinite suspension was overturned by a retired judge and Rice and his wife Janay appeared on the Today show, ABC News published never-before-seen surveillance video of Ray and Janay in handcuffs following their February 2014 arrests in Atlantic City.

The video, which ABC published Friday, shows Ray and Janay kissing while both are in handcuffs inside an elevator at the Atlantic City casino where a different surveillance video showed Ray punching Janay unconscious.

Both Ray and Janay were initially charged with simple assault following the incident, but the charges against Janay were quickly dropped. Ray was eventually granted entry into a pre-trial diversion program that allowed him to avoid jail time. He was initially suspended a mere two games, but was cut by the Baltimore Ravens and suspended indefinitely by the league after TMZ published video of the knockout punch on September 8. 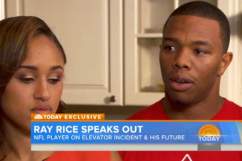