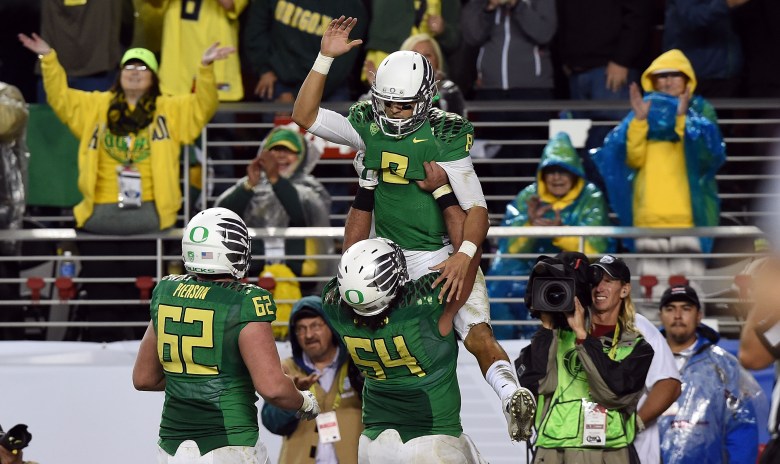 Oregon’s Marcos Mariota celebrates a touchdown in the third quarter Friday night during the Ducks’ rout of Arizona in the Pac 12 championship game. (Getty)

The first quarter Friday night was filled with missed opportunities for Oregon. But in a dominant performance that showed just how unstoppable the second-ranked Ducks can be, Oregon shook off the slow start and throttled seventh-ranked Arizona 51-13 to win the Pac 12 championship.

Marcus Mariota, the MVP of the title game and the likely Heisman Trophy winner, rushed for 3 touchdowns and threw for 2 more as the Ducks wrapped up a spot in the inaugural College Football Playoff, the only question being whether they’ll enter the tournament as the No. 2 seed or the No. 1. 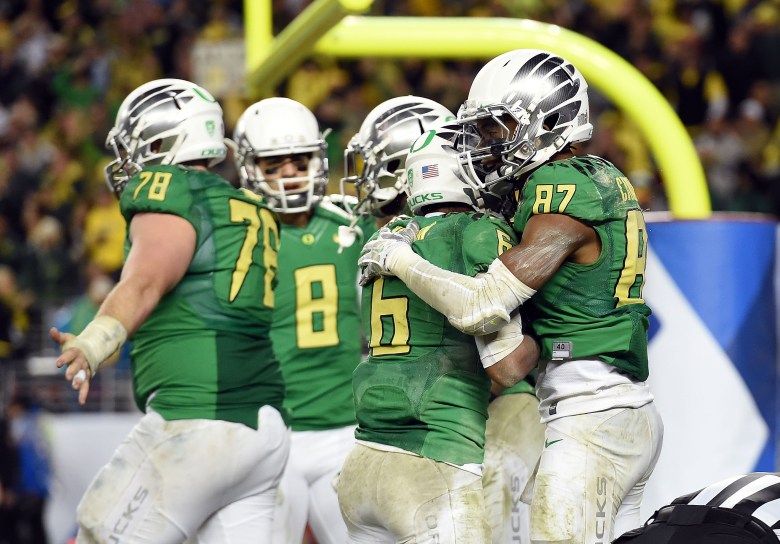 The Ducks dominated just about every statistical category. Among the highlights: 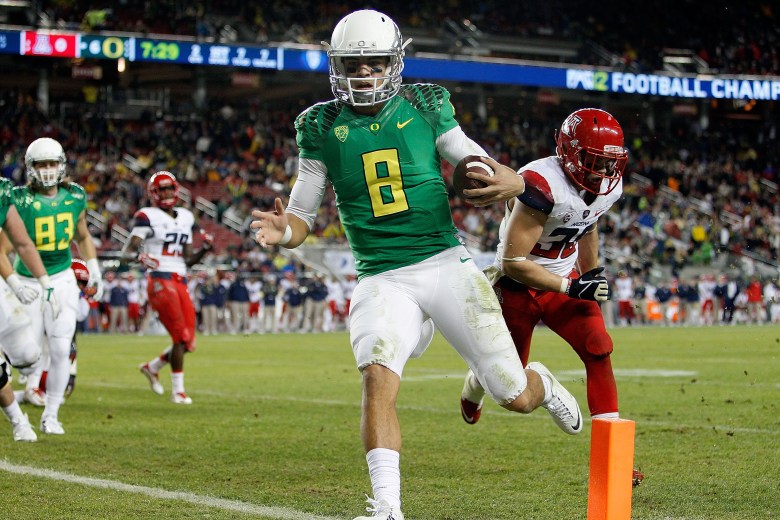 Mariota took it himself and snuck past a handful of Arizona defenders into the corner of the endzone with 7:27 left in the fist half, capping a 5-play, 39-yard drive to make it 13-0.

The touchdown was made possible by a 74-yard bomb from Mariota to Charles Nelson across the middle of the field that gave the Ducks the ball at the Arizona 11 with an easy opportunity to score.

Aidan Schneider added a 31-yard field goal on the last play at the half to stretch the Ducks’ lead to 23-0.

Jesse Scroggins hit Cayleb Jones for a 69-yard touchdown strike that put Arizona on the board and made it 30-7 with 9:34 left in the quarter, but Oregon answered, scoring on an 11-yard Mariota pass to Darren Carrington to make it 37-7 with 7:59 left in the quarter.

Mariota took it himself again for his third rushing touchdown of the game — this one from a yard out, with 4:54 left in the quarter — to stretch the lead to 44-7.

Senior walk-on running back Kenny Bassett scored from 19 yards out to add one more touchdown and make it 51-7 with 4:12 left in the game.

The bad news for Arizona in the first quarter was that the Wildcats did nothing on offense and were outgained 162-32 in total yards.

The good news? Oregon had to settle for a pair of Aidan Schneider field goals early: A 34-yarder on the Ducks’ opening drive that made it 3-0 with 11:30 left in the first quarter, and a 22-yarder with 7:55 left in the quarter that made it 6-0.

The Ducks failed to score a touchdown in the opening quarter despite 7 first downs and a time-of-possession advantage of more than 7 minutes.

The Ducks were on the verge of scoring their first touchdown when they drove down to the Arizona 1 mid-way through the second quarter. But back-to-back false start penalties pushed Oregon back to the 10, and Schneider missed a chip shot 27-yard field goal.

Preview: Arizona Trying to Do the Almost-Impossible & Stop Oregon

Scoring almost 46 points per game, Oregon’s offense has been nearly unstoppable the past two seasons under the direction of Heisman Trophy hopeful quarterback Marcus Mariota.

Key word in the above sentence: nearly.

That’s because when the No. 2 Ducks (11-1, 8-1 Pac-12) enter Levi’s Stadium in Santa Clara, Calif., Friday night for the Pac-12 Championship Game, they will be facing the one team which has made them look average: Arizona.

The 7th-ranked Wildcats (10-2, 7-2 Pac-12) have been responsible for Oregon’s last two losses, holding Mariota and Co. in check in the process. Earlier this season Arizona won 31-24 in Eugene and last year trounced the Ducks 42-16 in Tucson.

The point totals were the Ducks’ lowest offensive output for each season. In 2013, Oregon was held under 30 points in just one other game, a 26-20 loss to Stanford. This season, the Ducks have scored at least 38 points in each contest other than the Arizona game, winning them all.

Friday night we’ll see if Rich Rodriguez and his Wildcats can continue their mastery of Oregon or if Mariota and the Ducks can finally figure out the Arizona defense.

Here’s all you need to know about this year’s Pac-12 Championship Game:

Keep it here for live updates and highlights throughout the night. 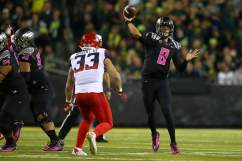