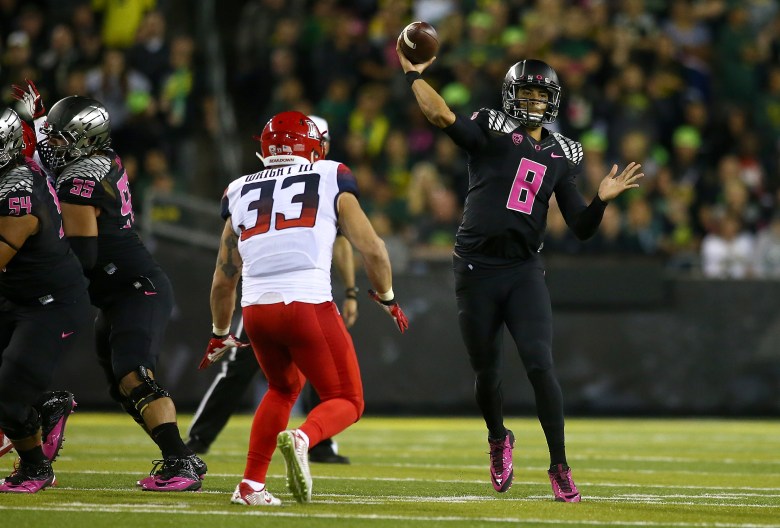 Scoring almost 46 points per game, Oregon’s offense has been nearly unstoppable the past two seasons under the direction of Heisman Trophy hopeful quarterback Marcus Mariota.

Key word in the above sentence: nearly.

That’s because when the No. 2 Ducks (11-1, 8-1 Pac-12) enter Levi’s Stadium in Santa Clara, Calif., Friday night for the Pac-12 Championship Game, they will be facing the one team which has made them look average: Arizona. (Follow this post for live updates throughout the game.)

The 7th-ranked Wildcats (10-2, 7-2 Pac-12) have been responsible for Oregon’s last two losses, holding Mariota and Co. in check in the process. Earlier this season Arizona won 31-24 in Eugene and last year trounced the Ducks 42-16 in Tucson.

The point totals were the Ducks’ lowest offensive output for each season. In 2013, Oregon was held under 30 points in just one other game, a 26-20 loss to Stanford. This season, the Ducks have scored at least 38 points in each contest other than the Arizona game, winning them all.

Friday night we’ll see if Rich Rodriguez and his Wildcats can continue their mastery of Oregon or if Mariota and the Ducks can finally figure out the Arizona defense.

Here’s all you need to know about this year’s Pac-12 Championship Game: 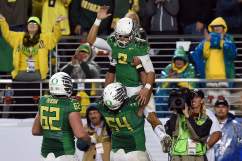 It’s no secret what Oregon does best: offense. Led by Heisman Trophy front-runner Marcus Mariota, the Ducks average 539.5 yards and 45.9 points per game, both good for fourth in the FBS. Mariota is at or near the top of every statistical category for quarterbacks. He’s thrown for 3,470 yards and 36 touchdowns with just 2 interceptions and has added 11 rushing scores with 636 yards. One of Mariota’s rare interceptions can be seen in the clip above.

The redshirt junior spreads the ball around as 5 receivers have at least 5 touchdown receptions. Byron Marshall is the leading pass-catcher with 56 grabs for 791 yards and 5 scores.

The Ducks also boast a top 25 rushing unit, led by freshman Royce Freeman. His 1,185 yards on 209 carries (5.7 average) and 16 touchdowns lead the team. He was recently named the Pac-12 Offensive Freshman of the Year. And as mentioned earlier, Mariota has also made a significant contribution to the ground attack.

Defensively, Oregon allows 23.3 points per game, though the unit has played better in the past month, giving up an average of 18 points over the past 4 contests. Defensive back Erick Dargan leads the team with 81 tackles (50 solo) and 5 interceptions, which also leads the conference.

The only 2 losses Oregon has suffered in its past 15 games have been at the hands of Arizona.

This is Oregon’s second appearance in the Pac-12 Championship Game. The Ducks defeated UCLA 49-31 in the conference’s first-ever title game in 2011.

A win Friday and Oregon (11-1, 8-1 Pac-12) will almost certainly clinch a spot in one of the College Football Playoff’s semifinals.

Anu Solomon isn’t exactly Marcus Mariota just yet, but the redshirt freshman is having a breakout season, his first as the Arizona quarterback. Solomon has thrown for 3,424 yards (8th most in the country) and 27 touchdowns with 7 interceptions. His top target is Cayleb Jones, who has 8 touchdowns on 63 receptions and 831 yards. Austin Hill (42-586-4) and Samajie Grant (40-645-5) have also contributed with solid seasons.

Pac-12 Defensive Player of the Year and All-America candidate Scooby Wright III has snacked on opposing quarterbacks, racking up 14 sacks. The sophomore linebacker has totaled 139 tackles (83 solo), which includes 27 stops for loss, and 6 forced fumbles, all team-leading numbers. Safety Jared Tevis has had a standout season also – 104 tackles (68 solo), 9 TFL, 4 sacks and 2 interceptions.

This is Arizona’s first time in the Pac-12 Championship Game.

Rich Rodriguez and his Arizona Wildcats have had Oregon’s number lately. But can they beat the Ducks for the third time in a row and second time this season? I don’t think so. Since falling to Arizona on Oct. 2, Oregon has won 7 straight and hasn’t scored less than 42 points in a game. The Wildcats are 5-2 since, including four straight. But Mariota is playing too well and the Ducks’ D has stepped up lately, so expect to see Mark Helfrich finally get the best of Rodriguez. It’ll be a close, entertaining game, not a 2-touchdown win as Vegas has it.

Read More
Arizona, Breaking News, College Football, College Football Playoff, Oregon
No. 7 Arizona has defeated No. 2 Oregon twice in a row. Can the Wildcats do it again in Friday's Pac-12 Championship Game? Read on for the preview and prediction.