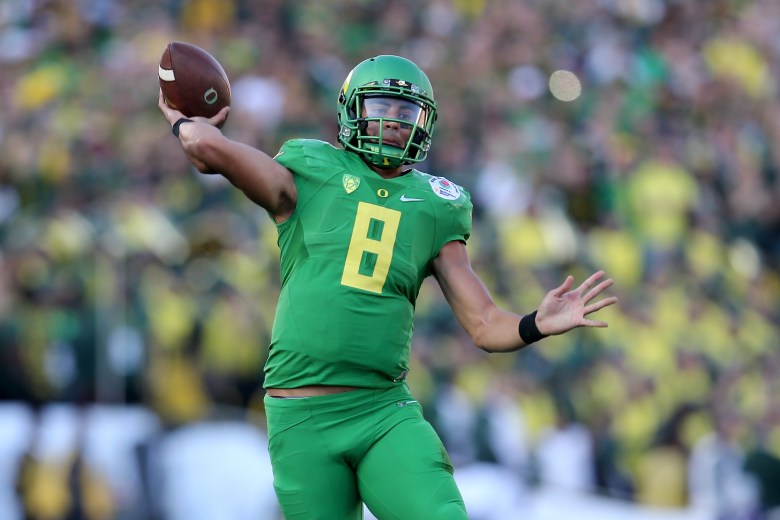 The college football bigwigs didn’t reinvent the wheel. But it sure feels like they have.

Pretty much every sport has a playoff system to decide a champion, but it wasn’t until this season that the highest level of college football began its 4-team tournament. And it was arguably the most-anticipated and welcomed change in all sports in quite some time.

The buzz leading up to the first-ever semifinal games was off the charts. And it will culminate Monday night when No. 2 Oregon meets No. 4 Ohio State in the inaugural Championship Game of the College Football Playoffs.

The Buckeyes are led by Urban Meyer, a National Championship-winning coach, and an underrated cast of explosive playmakers.

Mark Helfrich is only in his 2nd year in Eugene, but has the Ducks flying, thanks in large part to Heisman Trophy winning quarterback Marcus Mariota.

Each team has had endured its obstacles getting to this point. Ohio State lost its top 2 quarterbacks and has turned to 3rd-stringer Cardale Jones, who will be making his 3rd-career start. Oregon just recently lost 2 of its top receivers – one to an injury, one to a failed drug test.

Here’s what you need to know about Monday night’s National Championship showdown:

Oregon has gotten a reputation as having a finesse offense. Finesse is not the word I’d use. I watch Heisman winner Marcus Mariota navigate them down the field time after time and the word “relentless” pops into my head. They are persistent, continually going and don’t stop until you’re beaten down. You know, relentless.

And it all starts with Mariota, who has totaled 56 touchdowns (40 passing, 15 rushing and 1 receiving). He did throw his 3rd interception of the season in the semifinal over Florida State, but come on. The man could lead this offense in his sleep and does a great job of spreading the ball around. They practically have a different leading receiver each game, whether it’s Dwayne Stanford, Charles Nelson or Byron Marshall.

But there might be a slight problem. As mentioned above, 2 of their best receivers will not be playing. Darren Carrington, who is 2nd on the team with 704 receiving yards, is out because he failed an NCAA drug test. Also, Devon Allen, whose 7 TD receptions leads the Ducks, won’t play after injuring his knee on the opening kickoff of the Rose Bowl. Mariota usually makes everyone around him better. He’ll definitely need to do that Monday.

Royce Freeman was the Pac-12 Offensive Rookie of the Year after a 1,300-yard season (plus 18 TDs), but the return of Thomas Tyner to the backfield could provide a major boost. Tyner missed 4 games due to various injuries (shoulder, ankle), but rolled up 124 yards and 2 TDs vs. FSU. 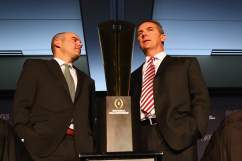 The “bend but don’t break” theory can be applied to Oregon on most occasions. The Ducks give a lot of yards, but have been pretty good at keeping opponents out of the end zone. The loss of All-American cornerback Ifo Ekpre-Olomu to a knee injury was felt vs. Florida State as Jameis Winston threw for 348 yards on 29 of 45 passing.

The Big Ten has a stigma for not having the fastest skill players, likely because most teams employ run-heavy, ground-and-pound offensive schemes. Alabama learned that isn’t the case as running back Ezekiel Elliott and wide receiver Devin Smith showed blazing speed and big-play ability. When all eyes were on quarterback Cardale Jones, who was making his 2nd career start, Elliott and Smith forced their way into the national spotlight. I’m sure they got Oregon’s attention.

But Jones also played like a seasoned vet. He wasn’t great vs. the Tide, but he made plays when he needed to (with his arms and legs). And let’s be real here, it was collegiate start No. 2 for the sophomore. Against Nick Saban and Alabama. And he won. The Ducks’ defense is far more forgiving than the Crimson Tide’s. Jones seems to have developed a quick rapport with Smith, who leads the FBS with a 27.7 yard per catch average.

The offensive line manhandled Alabama’s defensive front for most of the Sugar Bowl as Elliott continually got to the second level. But that’s what they pretty much did to every other opponent along the way as the Buckeyes – and Elliott (1,632 yards) – rank 9th nationally in rushing yards per game.

Behind All-America DE Joey Bosa‘s 13.5 sacks, the Buckeyes rank in the top 15 in that category. Bosa is beast (Big Ten-best 20 tackles for loss), dominating in pass rush situations and more than holding his own against the run. DT Michael Bennett has turned it on, getting 5 of his 7 sacks in the past 4 games.

Linebacker Joshua Perry is a sure-tackler (118 total, 71 solo) and defensive backs Vonn Bell (6 interceptions) and Doran Grant (5 INTs) are part of a secondary that forced 3 Blake Sims picks in the semifinal.

OSU boasts the 4th-best passing efficiency D in the nation. It goes without saying they need to show up. The Buckeyes have also scored 6 defensive TDs, though getting Oregon to turn the ball over has been a tough task.

The Buckeyes appear to have caught a break with Carrington and Allen missing the game.

Bosa and Co. will need to find ways to apply the pressure to try and disrupt Mariota’s rhythm. Way easier said than done. Even in Oregon’s only loss (to Arizona), Mariota played better than most QBs in any given week.

Bottom line, the Ducks are going to score, even without Carrington and Allen. Can the Buckeyes keep up in a track meet? They have certainly shown they can hit the home run with Elliott and Smith, and Jones has been as poised as one could be with 2 career starts under his belt. And the Buckeyes have just scored a combined 101 points against Wisconsin and Alabama, teams with top 10 defenses.

Meyer isn’t exactly a guy you want to bet against and Ohio State has not gotten the respect it deserves. But every time I watch Oregon play I see a completely focused and determined team. And it’s all because No. 8 is as cool as they come. Mariota has shown he can lose weapons and not lose a beat. He’ll need some of that magic again Monday night. He’ll have it.

Mariota’s experience and savvy pay off, and Oregon becomes the first National Champions of the College Football Playoff era. 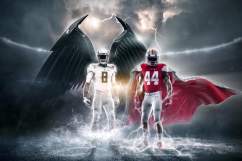