The ongoing and never-ending saga of the Floyd Mayweather Jr.-Manny Pacquiao superfight continues. Boxing fans around the world, after years of waiting, hold their collective breath while anticipating the announcement of the elusive meeting between the top boxers of our time. Will They Or Won’t They?

Involved parties took to social media to refute a recent TMZ report that claimed the dreammatch was signed, sealed, and delivered; and an announcement of the May 2 bout would follow in the coming days.

After keeping mum on the recent progress in negotiation (or lack of), Floyd Mayweather Jr. himself wrote via instagram: “Laying back, relaxing, enjoying good weather, palm trees and piña coladas. While they continue to lie about making the fight… #FightNotMadeYet.”

Laying back, relaxing, enjoying good weather, palm trees and piÃ±a coladas. While they continue to lie about making the fight... I'm just going to continue to travel and explore the world on my private jet. #FightNotMadeYet #Jamaica

…but also told it straight:

Top Rank Promotions President Bob Arum, who has been very optimistic of the fight happening, told the NY Daily News regarding the TMZ report :

No, I’m aware of the report, but there are still some contractual issues to work out. It’s close but not done yet.

While many are hopeful the fight will finalized — May 2 at the MGM Grand in Las Vegas is the date and venue if a deal is completed — there are still a number of issues, mainly on the broadcasting side.

Source involved in #MayweatherPacquiao deal: 'Nothing is happening before mid next week at the soonest. Not that close on (TV) deal terms.'

So there you have it, fight fans…#FightNotMadeYet!

With the media chasing their own tale (sic), and contradicting reports and leaks from insiders, the sporting world will have to wait until the official announcement is made until it can collectively exhale.

Stay tuned to Heavy.com for the next episode of “Will They Or Won’t They?”. 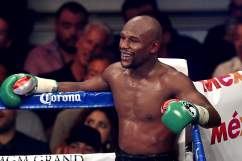