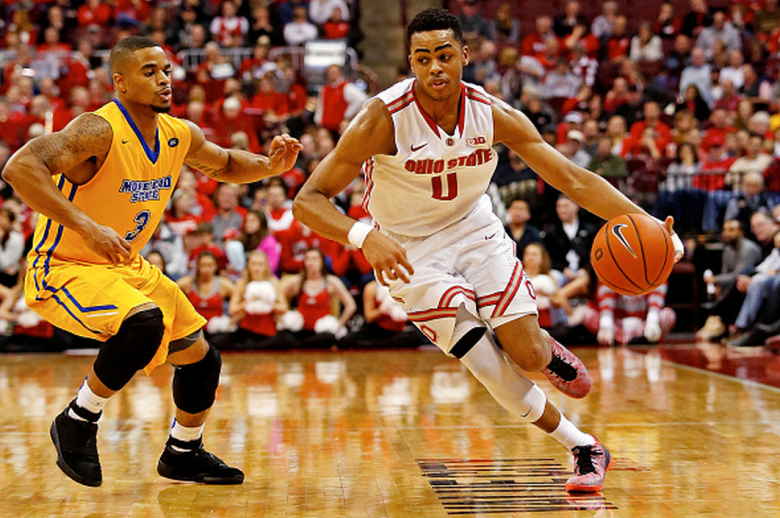 D’Angelo Russell #0 of the Ohio State Buckeyes drives the ball past Corban Collins #3 of the Morehead State Eagles during the second half at Value City Arena on December 13, 2014 in Columbus, Ohio. Ohio State defeated Morhead State 87-71. (Getty)

Heading into this season, Ohio State fans were used to seeing a rosey-cheeked, scrappy guard bring the ball up and help lead the charge for the Buckeyes. With losing Aaron Craft to graduation, head coach Thad Matta was in need of a replacement. He found one and then some in freshman D’Angelo Russell.

The 6-foot-5 guard came in to Columbus and literally hit the ground running with the Buckeyes. Russell has turned heads throughout the season and has helped lead Ohio State to 23-10 overall and 11-7 in the Big Ten. The Buckeyes received a bid from the selection committee to compete in the Big Dance as the No. 10 seed in the West bracket region. They will face-off with No. 7 VCU in the round of 64.

As preparation continues, here’s what you need to know about D’Angelo Russell:

1. Russell Is a Six-Time Big Ten Freshman of the Week

Russell has come into the Big Ten as a force to be reckoned with. So far he’s been elected as a six-time Big Ten Freshman of the Week and ranks in the top 10 of the conference in five stat categories.

He is second in the Big Ten in scoring – he averages 19.3 points per game. Russell is third in assists, 5.1 per game, and sixth in steals, 1.6 per game. He also averages just under three 3-pointers per game, which puts him at the top of the Big Ten, and is fifth in 3-point shooting percentage – 43.2.

Russell has also been projected as a potential national freshman of the year, according to Big Ten Network senior writer Tom Dienhart.

What has Russell had to say about his headline-grabbing performances?

I feel like I can do whatever it takes whether it’s passing, scoring or rebounding. Those stats just show up, which gives me a lot of attention. 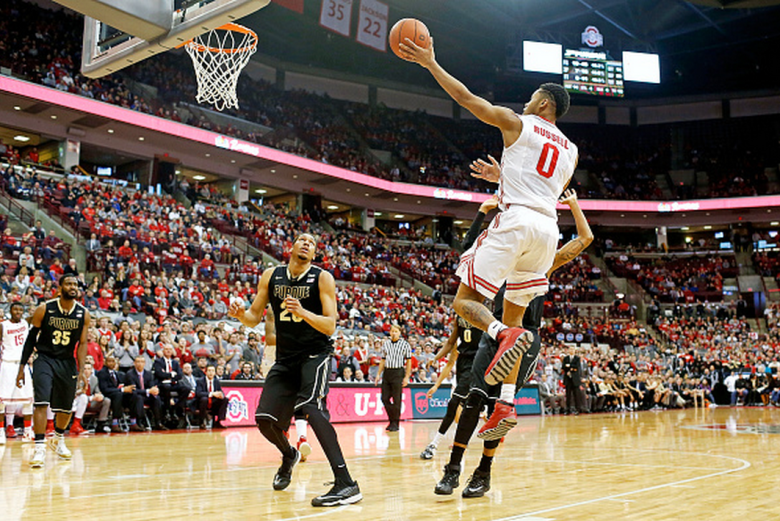 Russell’s top performance, arguably, came on February 8 when he recorded triple-double in the Buckeyes’ 79-60 win over Rutgers. It wasn’t just the first of his career, but also the first triple-double by a freshman in Ohio State program history. And it just so happened to come in front of 22 NBA scouts in the stands.

After his 23 points, 11 boards and 11 assists performance, Russell told The Columbus Dispatch:

I feel like I’ve been flirting with it all year and I finally got the chance to do it, and we got the win. That was more important to me.

That game along with his consistent play all season has put Russell as the projected No. 3 NBA Draft pick and No. 2 freshman prospect, according to DraftExpress. He sits just behind No. 1 Jahlil Okafor (Duke) and No. 2 Karl-Anthony Towns (Kentucky). 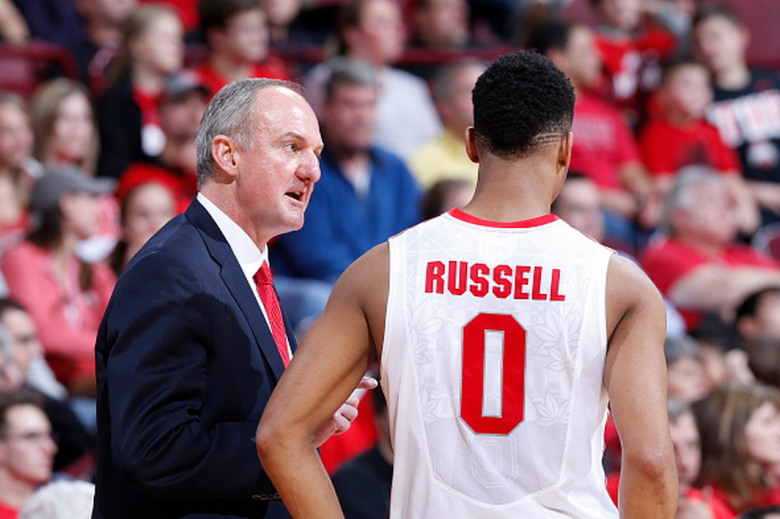 Head coach Thad Matta of the Ohio State Buckeyes talks to D’Angelo Russell #0 during the game against the Miami Redhawks at Value City Arena on December 22, 2014 in Columbus, Ohio. The Buckeyes defeated the Redhawks 93-55. (Getty)

The East may have fell 105-102 to the West, but Russell did some damage when he was in the game. The Louisville, Kentucky native only got 15 minutes of playing time during the 2014 McDonald’s All-American game, but that’s all he needed to show why he was one of the nation’s top 20 recruits.

Russell scored 11 points, had four assists and two rebounds in the game. He also wowed the crowd at Chicago’s United Center when he delivered an under-the-legs pass to Kansas commit Cliff Alexander, according to Bleacher Report.

4. Russell Was a Five-Star Recruit 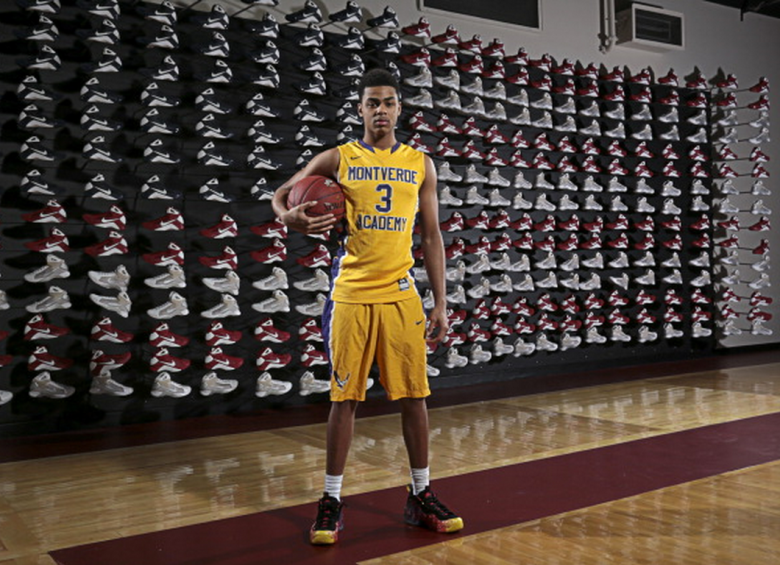 D’Angelo Russell of Monteverde Academy poses for a portrait during the 2014 Spaulding Hoop Hall Classic on December 19, 2014 at the Basketball Hall of Fame in Springfield, Massachusetts. (Getty)

Although Russell is from Louisville, Kentucky, he spent three seasons playing high school ball in Florida at Montverde Academy.

In his first season with the Eagles, Russell helped the team to a final record of 22-5 and a No. 14 national ranking. His junior year, Monteverde posted a 27-2 record, won the national high school invitational championship and Russell averaged 12.2 points, 4.4 rebounds and 3.4 assists.

As a senior, Russell helped lead the Eagles to a perfect 28-0 record, another national high school invitational title and averaged 19.3 points, 4.7 assists and 3.6 rebounds. He also went on to have 16 points and 11 boards in Monteverde’s win at the Dick’s Sporting Goods High School National Tournament.

With those accomplishments, Russell was rated as a five-star recruit by 247Sports and Rivals. Russell was ranked as the No. 18 recruit in the nation by Rivals and No. 13 in ESPN’s Top 100.

5. Russell Is a Candidate for the John R. Wooden Award and Others 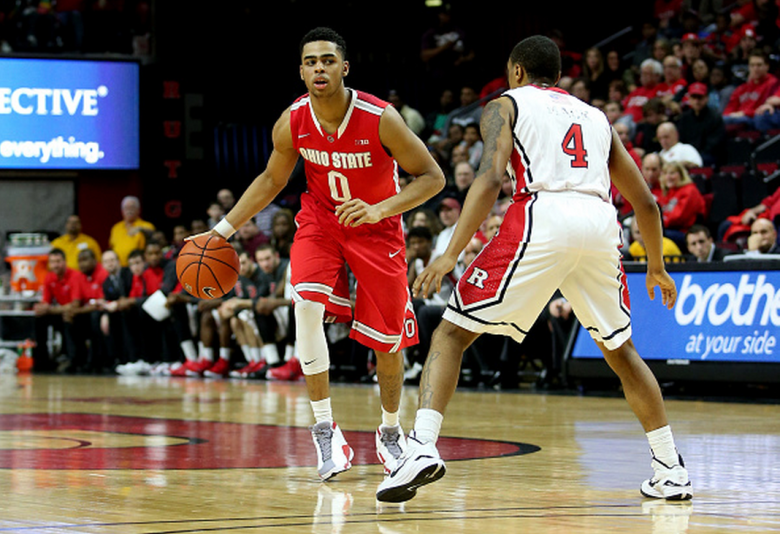 D’Angelo Russell #0 of the Ohio State Buckeyes against Myles Mack #4 of the Rutgers Scarlet Knights during their Big Ten conference game at Rutgers Athletic Center on February 8, 2015 in Piscataway, New Jersey. (Getty)

Russell is a finalist for the John R. Wooden award. He is up against Wisconsin’s Frank Kaminsky, Duke’s Jahlil Okafor, Utah’s Delon Wright and Notre Dame’s Jerian Grant.

He is also in contention for the Oscar Robertson award. Russell is competing against all Wooden Award finalists plus others such as Wichita State’s Ron Baker, Virginia’s Malcolm Brogdon, Kentucky’s Willie Cauley-Stein and Gonzaga’s Kyle Wiltjer.

Russell is also up for the Jerry West Award and conference awards such as Big Ten Freshman of the Year.