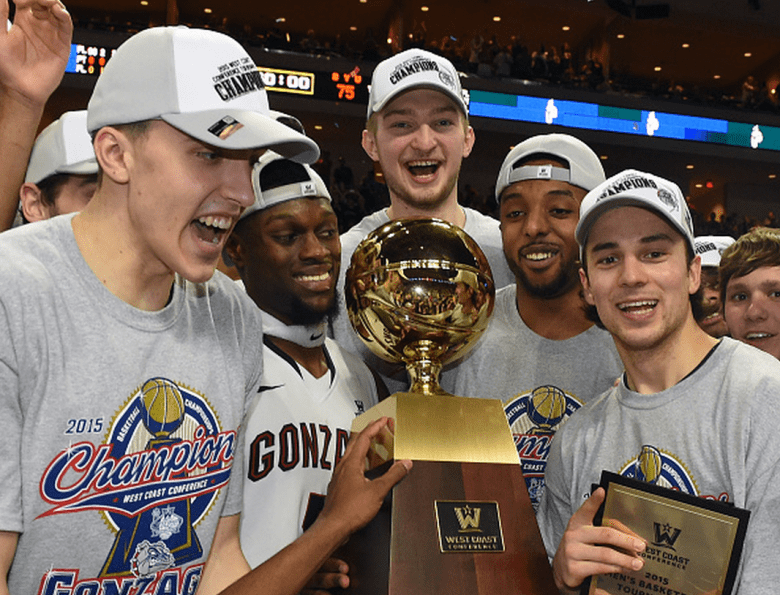 Kyle Wiltjer #33, Gary Bell Jr. #5, Domantas Sabonis #11, Byron Wesley #22 and Kevin Pangos #4 of the Gonzaga Bulldogs celebrate with the trophy after defeating the Brigham Young Cougars 91-75 to win the championship game of the West Coast Conference Basketball tournament at the Orleans Arena on March 10, 2015 in Las Vegas, Nevada. (Getty)

Well as expected Gonzaga punched its ticket to the dance.

The Bulldogs post a 32-2 overall record, were the West Coast Conference regular season and tournament champs with a 17-1 WCC record and were ranked No. 7 in the nation’s top 25.

The Zags knocked off San Francisco, 81-72, in the quarterfinals and Pepperdine, 79-61, in the semis, which set the stage for a rematch against BYU – the Bulldogs’ lone loss in the conference. What was anticipated to be a close game was far from that. The Bulldogs topped the Cougars, 91-75, to earn an automatic bid to the dance.

You can meet the Zags here and see their path to the NCAA Tournament in their season schedule.

Here’s what you need to know about Gonzaga: 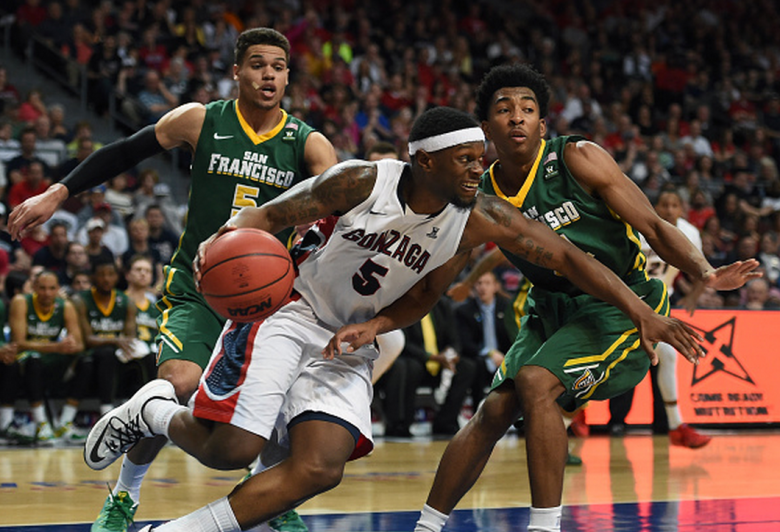 Gary Bell Jr. #5 of the Gonzaga Bulldogs breaks a press by Matt Glover #5 and Devin Watson #21 of the San Francisco Dons during a quarterfinal game of the West Coast Conference Basketball tournament at the Orleans Arena on March 7, 2015 in Las Vegas, Nevada. Gonzaga won 81-72. (Getty)

The Bulldogs first NCAA Tournament appearance was in 1995 – they lost to Maryland in their first game, 87-63. But after a four-year hiatus, the Zags have gone dancing every year since 1999.

Gonzaga’s best tournament run was in 1999 when they advanced to the Elite Eight but fell to UConn, 67-65. And they’re just two years removed from their best tournament seed – No. 1 in the West region – the Bulldogs went on to lose to No. 9 Wichita State, who made an unexpected Final Four run. 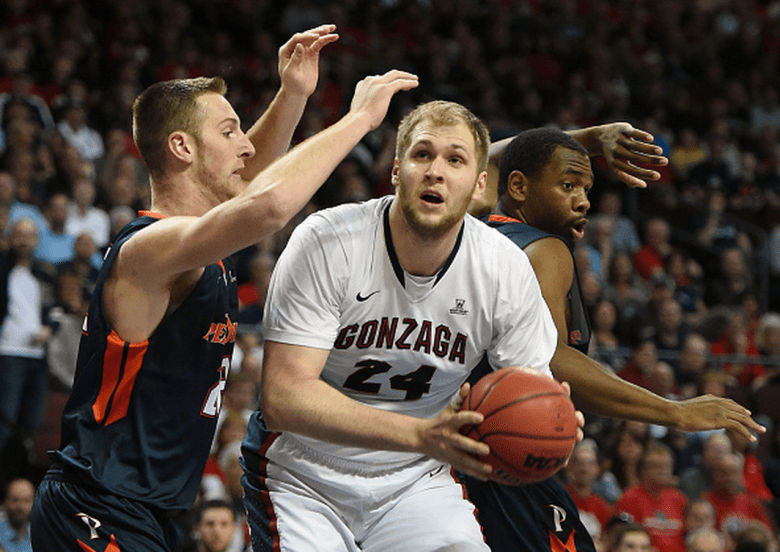 Przemek Karnowski #24 of the Gonzaga Bulldogs drives to the basket against Nate Gehring #22 (L) and Stacy Davis #5 of the Pepperdine Waves during a semifinal game of the West Coast Conference Basketball tournament at the Orleans Arena on March 9, 2015 in Las Vegas, Nevada. Gonzaga won 79-61. (Getty)

The Zags are the nation’s leader in shooting – 52.4 percent from the floor. The Bulldogs also rank 10th in the nation for scoring with 79.1 points per game. They allow just 60.9 points to opponents.

In addition, Gonzaga is second in defensive rebounds with 27.6 and eighth in the nation for assists – 16.5.

Redshirt junior forward Kyle Wiltjer leads the team in scoring and is second in rebounding. The 6-foot-9 Portland, Oregon native averages 16.7 points and 6.0 boards per game and shoots 53.6 percent from the floor and 46.6 from behind the arc.

And while his stats speak for himself, what has gained Wiltjer so much media attention is the fact after playing for Kentucky – predominantly as the sixth man – he transferred to Gonzaga. In his freshman season with the Wildcats, who won the national championship that year (2012), Wiltjer averaged 5.0 ppg, 1.8 rpg and sank 35 from 3-point range. As a sophomore, he was named SEC Sixth Man of the Year and averaged 10.2 points and 4.2 rebounds per game.

4. Mark Few Is In His 16th Season as Head Coach 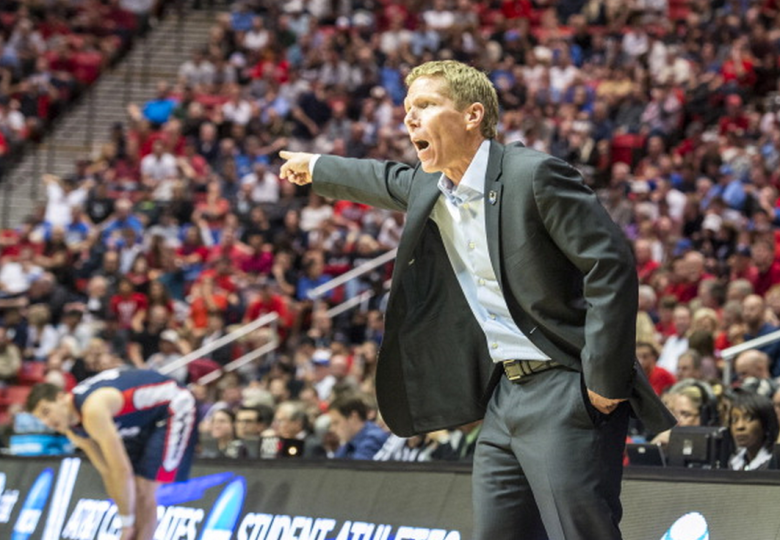 Mark Few has spent the past 26 years with the Zags – his first 10 were spent as a grad assistant coach for a year and then as assistant for the next nine. Few took over the program in 1999 following the abrupt departure of Dan Monson, who left to take the Minnesota head coaching job.

Few has led the Bulldogs to 14 regular season WCC titles and 12 WCC tournament championships. He has compiled an overall record of 435-102 and has been named WCC Coach of the Year 11 times.

Born in Creswell, Oregon, Few was a star point guard at Creswell High School and graduated in 1981. He originally attended Linfield College with intentions of playing basketball and baseball, but couldn’t because of reoccurring issues from a dislocated shoulder he suffered during his high school senior football season. Few transferred to the University of Oregon, hoping to play baseball, but the Ducks had dropped their varsity baseball program by the time he arrived in Eugene. Regardless, Few stayed enrolled at Oregon and graduated in 1987 with a B.S. in physical education. 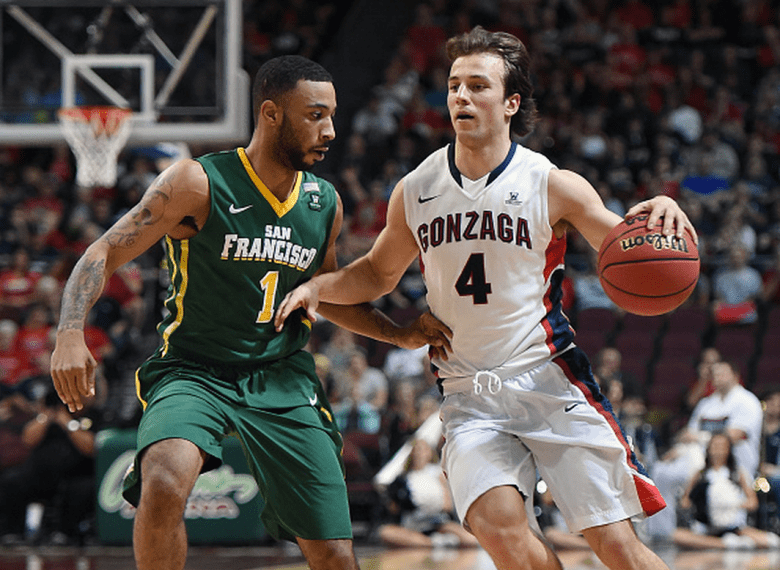 Kevin Pangos #4 of the Gonzaga Bulldogs drives against Corey Hilliard #1 of the San Francisco Dons during a quarterfinal game of the West Coast Conference Basketball tournament at the Orleans Arena on March 7, 2015 in Las Vegas, Nevada. Gonzaga won 81-72. (Getty)

Gonzaga University is located in Spokane, Washington, which is a little over an hour west of the Idaho border, Lake Coeur D’Alene and Silverwood Theme Park. The University is also located just above the Spokane Falls, 100-acre Riverfront Park and the 39-mile Centennial Trail.

The private liberal arts college works to provide a Catholic liberal arts education that is dedicated to the Jesuit, Catholic, humanistic ideals of educating the mind, body and spirit to create men and women for others. Gonzaga was established in 1887 and has an enrollment of approximately 7,423.