Notre Dame Head Coach Mike Brey and the Fighting Irish made quite the turnaround from last season’s 15-17 (6-12) record and no NCAA tournament bid, to put together a strong 2014-15 season.

The Fighting Irish, who came into this year unranked, are second in the nation for field goal percentage – 50.9. They finished with a final record of 29-5 overall, 14-4 in the ACC and got an automatic bid to be the No. 3 seed in the Midwest region bracket after claiming the ACC Tournament title – the first in program history.

But ND’s success didn’t come overnight, for one senior it’s been four years in the making to get to this point. Jerian Grant, the 6-foot-5 guard from Maryland, is looking to continue his senior leadership in hopes of bringing a national title to South Bend.

While Grant and the Irish prepare, here’s what you need to know about No. 22:

1. Grant Leads The ACC in Assists

Although Grant did not play the 2010-11 season, since hitting the hardwood in 2011, Grant has pumped out consistent stats each year. Take a look at Grant by the numbers:

The last stat line along with the fact he’s shooting nearly 50 percent from the field and just over 75 percent from the charity stripe have put Grant in the top 10 of six ACC stat categories.

He leads the conference in assists, he’s fifth in scoring, sixth in steals, seventh in field goal percentage and eighth in free throw percentage. 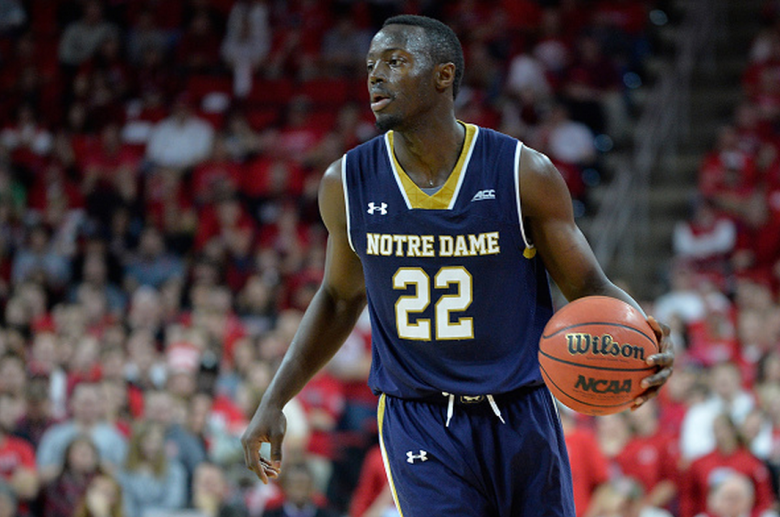 Jerian Grant #22 of the Notre Dame Fighting Irish moves the ball against the North Carolina State Wolfpack during their game at PNC Arena on January 25, 2015 in Raleigh, North Carolina. Notre Dame won 81-78 in overtime. (Getty)

Grant played three seasons at nationally-renowned DeMatha High School in Washington, D.C. under head coach Mike Jones. As a junior, Grant averaged 7.1 points, 6.2 boards and 6.0 assists while helping his team to the all-Washington Catholic Athletic Conference (WCAC) regular season and tournament titles. The Stags also won the Abe Pollin City crown, were ranked second in the DC Metro area by the Washington Post and earned a No. 7 ranking in the USA Today prep poll.

As a senior, Grant was team captain and averaged 10.5 points. He helped lead the Stags to a 32-4 record, another WCAC regular and tournament championship and a second city title. Grant was also named to the first team all-WCAC and All-Met honoree by the Post for the second straight year. During his career, he also played in the Capital Classic All-Star Game and for Nike Team Takeover. Grant was name MVP of Nike Super Showcase and to the all-tournament team at the King James Classic.

Grant looked at DePaul, Providence, Virginia and Charlotte before committing to Notre Dame on September 9, 2009 – just four days after his official visit.

3. Grant Is the Son, Brother and Nephew of NBA Players 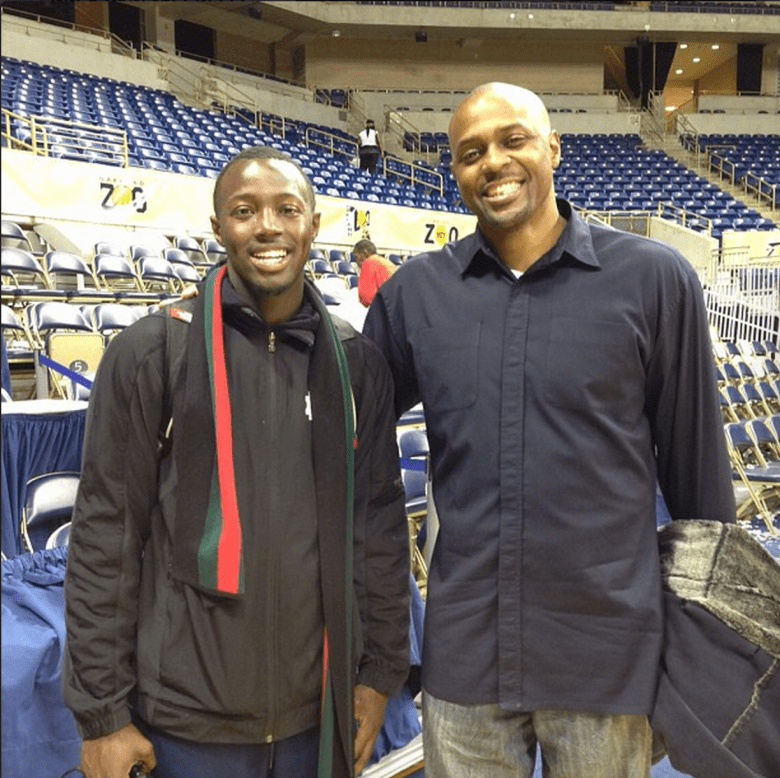 Notre Dame senior Jerian Grant posted this photo of him with his father, former NBA player Harvey Grant, and the caption: “Me and Big Harvey” (Instagram/thatgrant22)

While Grant puts in work on the court, there is a strong basketball gene flowing through the veins of his family.

“Holdyn” Jerian Grant is one of Harvey Grant’s four sons. Harvey is a former NBA player who was the 12th pick in the first round of the 1988 draft. He played for the Washington Bullets/Wizards, Portland Trail Blazers and Philadelphia 76ers before retiring in 1999.

Jerian’s uncle Horace, who is Harvey’s identical twin brother, also played in the NBA. Horace was the 10th pick in the first round of the 1987 draft, he won four NBA championships with the Chicago Bulls and the L.A. Lakers, he also played for the Orlando Magic and the Seattle SuperSonics and he retired in 2004.

Jerian’s older brother Jerai played at Clemson from 2007-2011 and has since been playing professionally overseas. His younger brother Jerami played two years for Syracuse before being selected by the Philadelphia 76ers in the second round of the 2014 draft. And his youngest brother is following suit – he’s a senior at DeMatha High School. 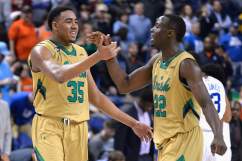 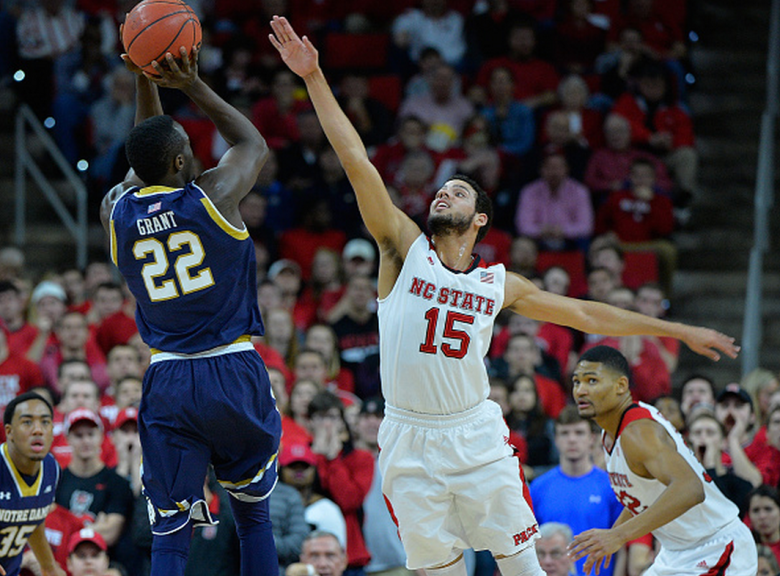 Cody Martin #15 of the North Carolina State Wolfpack challenges a shot by Jerian Grant #22 of the Notre Dame Fighting Irish during their game at PNC Arena on January 25, 2015 in Raleigh, North Carolina. Notre Dame won 81-78 in overtime. (Getty)

The 22-year-old guard is projected as the No. 13 NBA draft pick, according to DraftExpress. Grant sits between Kansas’ Kelly Oubre Jr. (No. 12) and UCLA’s Kevon Looney (No. 14).

Grant is also considered the No. 2 pick for NCAA seniors – he’s behind Wisconsin’s 7-footer Frank Kaminsky.

5. Grant Is a Naismith Trophy Semifinalist 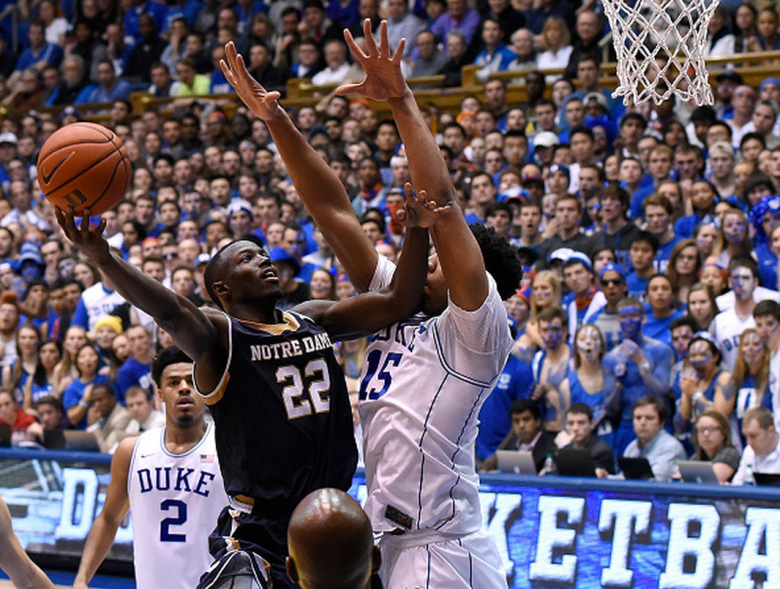 Jerian Grant #22 of the Notre Dame Fighting Irish drives against Jahlil Okafor #15 of the Duke Blue Devils during their game at Cameron Indoor Stadium on February 7, 2015 in Durham, North Carolina. Duke won 90-60. (Getty)

Grant is one of the 10 semifinalists, which were announced on March 4, for the Naismith Trophy. The other finalists include Kentucky’s Willie Cauley-Stein, Ohio State’s D’Angelo Russell, Gonzaga’s Kevin Pangos, Northern Iowa’s Seth Tuttle and Duke’s Jahlil Okafor.

And like some of his competition, Grant is a candidate for other awards including the Wooden Award, AP College Player of the Year, Oscar Robertson Trophy, Jerry West Award, All-American, ACC Player of the Year and All-ACC.

The four finalists for the 2015 Men’s Naismith Trophy will be announced March 22, and the winner will be revealed in Indianapolis on April 5 – the day between the Final Four and national championship games. If Grant wins he will join players such as Tim Duncan (Wake Forest), Danny Manning (Kansas), Patrick Ewing (Georgetown) and Michael Jordan (UNC).