LeSean “Shady” McCoy has been traded from the Philadelphia Eagles to the Buffalo Bills, according to ESPN.

But McCoy’s agent says a trade hasn’t been finalized.

I just spoke with the Eagles organization and there is no trade for LeSean at this time. There have been discussions but nothing finalized

ESPN reports that the trade can’t be finalized until Tuesday, March 9, when the new league year begins.

1. He Will Be Traded for Kiko Alonso

The Bills will send linebacker Kiko Alonso back to the Eagles for McCoy, ESPN reports. Alonso played for Eagles head coach Chip Kelly at Oregon and missed the entire 2014 season while rehabbing a torn ACL. The inside linebacker was third in the NFL in tackles in 2013, his rookie season, and also had four interceptions.

Alonso is expected to be ready to return to action by training camp. In late February he told CBSSports.com:

I anticipate being 100 percent before camp. By camp, I definitely feel I’ll be at 100 percent. I feel very good with where I’m at. By camp I’ll be full go. … Basically I’m just rehabbing four-five days a week, just recovering. That’s it. That’s all I do, work out and recover and wait for the next workout.

2. He Played Six Years With Philadelphia

McCoy has played his entire career with the Eagles after being drafted in the second round of the 2009 NFL draft out of Pittsburgh. McCoy became the Eagles all-time leading rusher during the 2014 season. He will leave the team having rushed for 6,792 yards. He has also scored 44 rushing touchdowns in his career, the third-most in Philadelphia history.

McCoy ran for 1,319 yards and five touchdowns last season for Philadelphia, down slightly from 2013 when he ran for a league-leading 1,476 yards.

McCoy signed a contract extension in 2012 that expires after the 2017 season, according to NFL.com.

5. He Will Replace CJ Spiller

Check me out coming up soon on Total Access on @nflnetwork to discuss free agency.

Bills running back CJ Spiller told NFL Network that he won’t be returning to Buffalo. Spiller is set to become an unrestricted free agent. Spiller learned about the trade while in the green room at the NFL Network. On “NFL Total Access” Spiller said he had hoped to return to Buffalo: 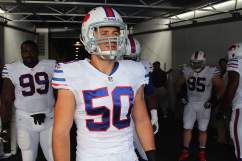