Kiko Alonso, a linebacker, will be traded from the Buffalo Bills to the Philadelphia Eagles for running back LeSean McCoy, ESPN reports.

Here’s what you need to know about Alonso:

Alonso, 26, tore his ACL while working out in Oregon and missed the entire 2014 season, which was his second season playing in the league, according to ESPN.

He was already recovering from an injured hip when he hurt his knee. Alonso also injured his knee while in college, missing the entire 2010 season.

Alonso has been rehabbing his injury since last off-season and is expected to be ready for training camp. In late February he told CBSSports.com:

I anticipate being 100 percent before camp. By camp, I definitely feel I’ll be at 100 percent. I feel very good with where I’m at. By camp I’ll be full go. … Basically I’m just rehabbing four-five days a week, just recovering. That’s it. That’s all I do, work out and recover and wait for the next workout.

2. He Played at Oregon for Chip Kelly

Alonso will be reunited with Kelly in Philadelphia after playing under the former Ducks coach for four years in college. Alonso was a second-team All Pac-12 player in 2012 and was the defensive MVP of the 2012 Rose Bowl.

Alonso made an immediate impact for the Bills after being drafted in the second round of the 2013 draft, recording 159 tackles and four interceptions. Alonso also had two sacks and a forced fumble during his one season in the NFL. He played every snap for the Bills and was second in the Rookie of the Year voting.

5. His Parents Are From Cuba & Colombia

Alonso’s father, Carlos, was born in Cuba and raised in Puerto Rico. His mother, Monica, is from Colombia. He was born in Massachusetts and raised in California. He has two brothers, Carlos and Lucas. He is not married. 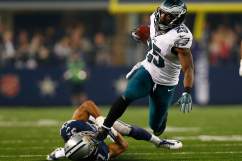 Read More
5 Fast Facts, Football, NFL, Sports
Kiko Alonso, a linebacker, has reportedly been traded from the Buffalo Bills to the Philadelphia Eagles for running back LeSean McCoy.