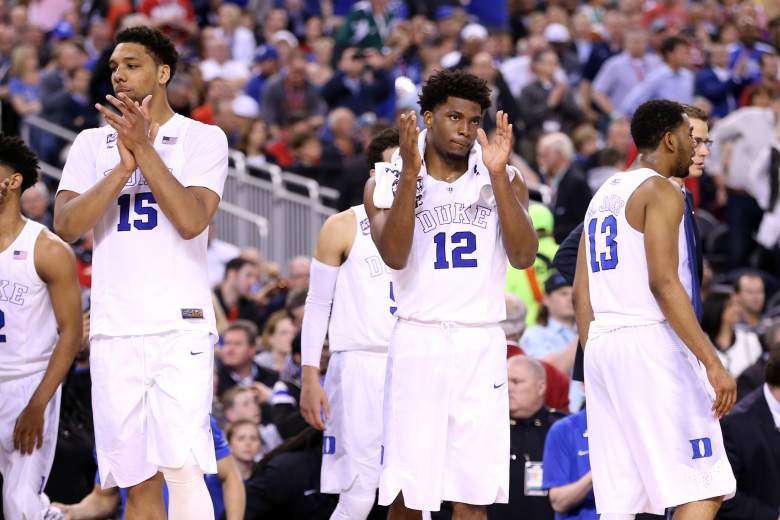 Duke had no problems advancing to the National Championship by beating Michigan State 81-61 on Saturday. (Getty)

The Spartans started hot, but Duke clamped down on defense and kept MSU at a double-digit deficit for all of the second half.

Justice Winslow scored 19 points and Jahlil Okafor added 18 as Duke improved to 34-4. The Blue Devils defeated the Spartans for the second time this season. They beat MSU 81-71 in November.

Michigan State’s Denzel Valentine started hot, hitting 3 of 3 3-pointers to give the Spartans a 14-6 lead at the first official time out with 15:44 left in the first half.

After Denzel Valentine hit 3 of Michigan State’s 4 early 3-pointers to give the Spartans a 14-6 lead, Duke got it together defensively and used a 7-0 run to make the score 14-13 with under 12 minutes left in the first half.

Jahlil Okafor’s dunk with about 9:30 left in the first half gave Duke its first lead. After beginning the game with 4 3-pointers, Michigan State went cold offensively.

Michigan State Shot Just 29 Percent in the First Half

MSU didn’t make a field goal over the final 6:04 of the first half.

Duke came out hitting in the second half, outscoring Michigan State 12-6 in the first 5 minutes to take a 48-31 lead.

With 11:57 remaining in the game, Duke had just 5 turnovers, while Michigan State had 12 TOs. The Blue Devils had 7 steals compared to only 1 for the Spartans.

Both teams began shooting well with under 10 minutes remaining. When it looked like Michigan State was beginning to chip away at Duke’s lead, the Blue Devils would respond with a basket of their own.

Duke Kept a 13-Point Advantage With Under 4 Minutes Remaining

Duke held a double-digit lead for the entire second half and led 67-54 with 3:37 left in the game.

Preview: Duke & Michigan State Ready to Face Off in the Final Four

Many things have changed since November 18.

The Blue Devils (33-4) went on to have another stellar season, going 15-3 in ACC play. The Spartans took a different route, finishing the regular season with an uncharacteristic 11 losses.

But when the NCAA Tournament comes around and the games really matter, Tom Izzo’s MSU squad always shows up. Getting the No. 7 seed in the East region, the Spartans knocked off No. 2 Virginia, No. 3 Oklahoma and No. Louisville to secure their first Final Four since 2010.

Duke was rarely challenged in its run to the National Semifinals, winning four games by an average of 17 points per contest.

Kentucky and Wisconsin play in the second Final Four game. 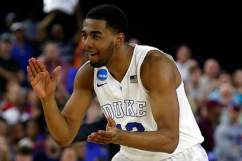 How to Watch Duke vs. Michigan State Live Stream Online