The PGA Tour stops in Charlotte, North Carolina, this week for the Wells Fargo Championship at Quail Hollow and Heavy’s partners at DraftKings have created a low buy-in fantasy contest with a $10,000 first-place prize.

Sign up here for DraftKings’ PGA $100K Birdie contest for a chance to win $10,000. The contest is FREE for first-time DraftKings users and $3 for current members.

If you miss the deadline for the Wells Fargo Championship, don’t worry. This Birdie contest is a weekly game, so you can make sure you get registered next week.

The rules are simple: choose 6 golfers while staying under your allotted salary cap of $50,000. The better your players do at Quail Hollow, the better your fantasy team does.

This week’s field includes 3 of the world’s top 10-ranked players – Rory McIlroy (No. 1), Henrik Stenson (3) and Jim Furyk (6). McIlroy has the most expensive cap number at $14,000 nearly one-third of your space. I’m having trouble justifying spending that much on one player, so McIlroy didn’t make my roster.

Neither did Stenson, who has a so-so history at the course, or Furyk, who is the PGA Tour’s career money leader at the event. Furyk was a difficult decision to leave out, but I think I found 6 golfers who can pile up the points while playing all 4 rounds.

It’s important to find the pros who have the best chances to make the cut. A player who misses the cut does you no good. So don’t take many risks. Look for the players with good course track records and guys who are currently playing well. My squad falls into those categories.

Holmes won the event in 2014 and is coming off a 75 fantasy point performance last week at The Players. While missing 2 cuts in the past 4 events, Holmes is playing well with 2 other runner-up finishes in 2015. He’s a mammoth off the tee and that could lead.

Editors note: Think you know golf? If so, give this a shot: Heavy’s partners at DraftKings are running a Fantasy Golf Millionaire Maker contest for next month’s U.S. Open. Pick the right lineup and you can turn your $20 into $1 million. It’s too early to choose your team, but you can reserve your spot in the contest today.

Haas is a Charlotte native and while he doesn’t have a great recent track record at Quail Hollow, he’s playing his best golf of the season. Coming off a T4 at The Players Championship, Haas does have 2 top 5 finishes in the event. He has averaged an excellent 78.3 fantasy points per tournament over the past 3.

Kisner is one of the hottest players on the Tour at the moment with 2 runner-up finishes in his past 3 events. He nearly won The Players Championship, but lost in a playoff to Rickie Fowler. Brimming with confidence, Kisner is averaging 103.7 fantasy points over the past 3 tournaments. He’ll be a popular pick this week with that manageable price tag. Also enticing, Kisner finished T6 in 2014. 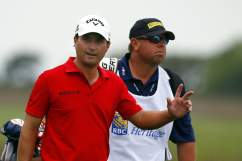 Moore has gone T18, T6, T5 in the last 3 Quail Hollow events, so he’s got the track record. He missed the cut in The Players, but that was his first of 2015. This looks like a solid week to use Moore as he’s a likely rebound candidate.

de Jonge finished T6 here a year ago and averaged 87.8 fantasy points in the 3 tournaments before last week’s 55 points at The Players. He’s streaky and he seems to be pretty focused at the moment. And you can’t go wrong with de Jonge’s price tag.

Perez has been playing very well, finishing in the top 26 in each of the past 4 tournaments and has an average of 80 fantasy points over the past 3 events. Perez has a top 10 under his belt at Quail Hollow and was in contention for a top 10 in 2014 before a meltdown on Sunday. Let’s hope Perez makes it to Sunday and avoids last year’s outcome.

The U.S. Open is next month and you can turn $20 into $1 million with the Fantasy Golf Millionaire Maker contest designed specifically for golf’s second major.

Read More
DraftKings, Fantasy Golf, Fantasy Sports, Golf, PGA Tour
The PGA is in Charlotte for the Wells Fargo Championship. There are some big names in the field, so which should you use for your DraftKings fantasy lineup?