The 147th running of the Belmont Stakes is this Saturday and for the 2nd straight year, a horse the opportunity to make history and win the Triple Crown, a feat that hasn’t been accomplished since Affirmed did it in 1978 (37 years ago).

Last year it was California Chrome who ran a valiant 4th, but ultimately fell short thanks to Tonalist. It’s American Pharoah’s turn this year and in order to do so, he and jockey Victor Espinoza have to navigate the mile-and-a-half challenge against seven other horses.

On Wednesday morning, starting post-positions and Morning Line Odds for the 2015 Belmont Stakes were determined. Here are the ML Odds for the eight horses that will be competing at Belmont Park on Saturday: 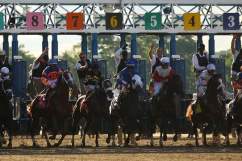 Post time for Saturday’s Belmont Stakes is approximately 6:30 p.m. ET and the race will be broadcast on national television on NBC.