Coutinho with a screamer to give Liverpool a late lead. #LFC pic.twitter.com/8BzgLXrTKt

In what could be described as the most boring game of the Premier League weekend, Liverpool attacking midfielder Philippe Coutinho unleashed this shot from well outside the box against Stoke. The goal came in the 86th minute of what looked to be a game headed towards a dour 0-0 draw. The goal gave Liverpool a winning start to the English Premier League season.

The goal was Coutinho’s 14th in 82 matches for Liverpool. He joined from Inter in January 2013 for about $14 million. Coutinho, 23, has 11 career caps for Brazil. Here is another angle.

Stoke’s 22-year-old goalie Jack Butland appeared to got a fingertip on the shot, but couldn’t prevent it from going into the net. 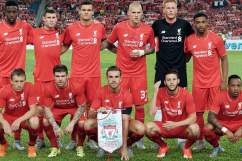 Read More
Soccer
Coutinho hit the goal of the weekend in Liverpool's match with Stoke on Sunday.