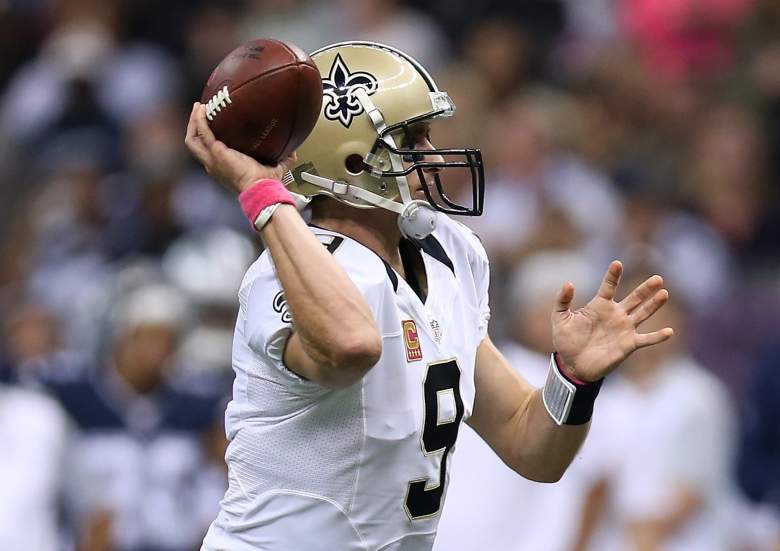 Drew Brees became just the fifth player in NFL history to pass for 400 touchdowns in his career. (Getty)

Drew Brees connected with C.J. Spiller for an 80-yard touchdown on the first play of overtime to give the Saints a thrilling 26-20 win over the Cowboys at home.

The play was Brees’ 400th touchdown pass of his career. He is just the fifth quarterback in NFL history to reach the 400 touchdown plateau for his career.

Brees was effective if not brilliant on Sunday night, carving Dallas’ defense up for 359 yards and two touchdowns on 33-of-41 passing. Brees, at times appearing hampered by the throwing shoulder injury that kept him out of last week’s game, had a lot of help as he spread the ball around to nine different receivers for his 33 completions.

The Cowboys, led by backup quarterback Brandon Weeden, kept things interesting until the bitter end. Terrance Williams scored the tying touchdown with just under two minutes to play in regulation on a diving play near the back of the endzone on a picture perfect throw by Weeden on 4th-and-7 from the Saints’ 17-yard line. Weeden finished the game 16-26 with 246 yards and a touchdown.

The Saints followed that by quickly moving into field goal range with no timeouts with just 12 seconds to go in the game. New Orleans placekicker Zach Hocker hit the upright on a 30-yard field goal attempt that would have effectively ended the game.

Instead the game moved into overtime, where Brees and Spiller made quick work of the ‘Boys. Spiller finished with five catches for 99 yards to go along with his touchdown, while Dallas wideout Brice Butler led his team with 1 reception for 67 yards.

Drew Brees led the Saints downfield with fewer than two minutes to go in regulation, but Saints placekicker Zach Hocker hit the left upright an a 30-yard field goal try, sending Sunday night’s game between the Cowboys and Saints to overtime, tied at 20-20.

Terrance Williams dove for a 17-yard touchdown reception from Brandon Weeden as the Cowboys tied the Saints 20-20 with less than two minutes to go in regulation.

Khiry Robinson ran for a 1-yard touchdown following a controversial reversal of what initially looked to be a Mark Ingram nine-yard touchdown run for New Orleans. Robinson’s score capped an 11-play, 67 yard drive by the Saints to go up 20-13 midway through the fourth quarter at the Superdome.

Drew Brees led the Saints on the efficient scoring drive, dinking and dunking his way through the Dallas defense. Brees has 205 yards passing on the day despite this just being his first game back from a rotator cuff injury. 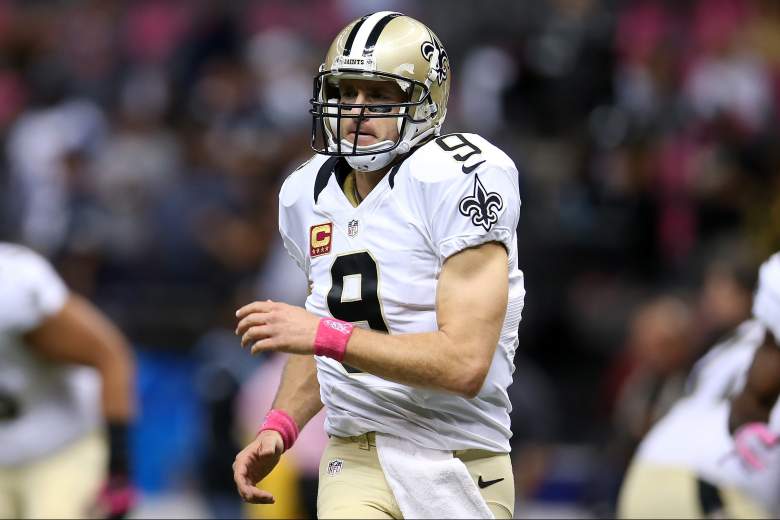 Drew Brees led the Saints on a 13-play 69-yard drive, which resulted in a Zach Hocker 29-yard field goal and New Orleans has pulled even with Dallas on Sunday night at 13-13 through three quarters.

Brees has completed an impressive 23-of-27 throws for 170 yards on the night.

Brandon Weeden with the dime. Butler was a steal for the Cowboys, as I said at the time of his pickup. #SNF pic.twitter.com/I7j1jeWCfy

Dan Bailey hit a 38-yard field goal to give Dallas a 13-10 lead over New Orleans midway through the third quarter.

Brandon Weeden hooked up with wideout Brice Butler for a 67-yard passing play to set up the score on a second down and 11 from the Cowboys 24-yard line just moments before.

Running back Lance Dunbar was carried off of the field on Sunday night in New Orleans, having suffered an apparent knee injury.

Dunbar had gotten off to a strong start for Dallas, racking up 54 yards on just three carries against the New Orleans defense.

The Saints followed with a 51-yard field goal shortly after the injury to tie the game at 10 apiece.

Cowboys Lead Defensive Battle at the Half 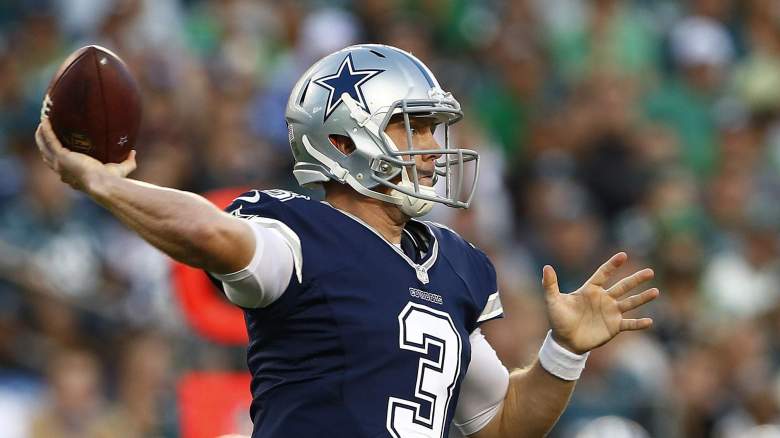 Brandon Weeden and the ‘Boys hold a slim lead at the break in New Orleans.

Brandon Weeden and the Dallas Cowboys are in pretty good shape in the Superdome against the Saints on Sunday night, leading New Orleans 10-7.

Weeden, the backup quarterback filling in for the injured Tony Romo, has gone 8-12 for just 66 yards, but has helped to meticulously manage the Cowboys offense. Lance Lunbar recorded 54 yards on just three carries and Joseph Randle scored the lone touchdown for Dallas.

Drew Brees got off to a hot start, including a touchdown pass for his 5,000th career completion, but then the Saints offense stalled a bit as the Dallas defense shored up and limited Brees to just 49 yards in the second stanza.

Brees sat out New Orleans’ Week 3 loss to Carolina with a throwing shoulder injury and was declared active just prior to the Cowboys game.

Jospeh Randle Leaps at Goalline, Scores to Give Dallas Lead

Randle broke the plane with the ball in his hand. That's a touchdown. #SNF #Cowboys pic.twitter.com/UIcxsCTMxU

Cowboys running back Joseph Randle leaped toward the endzone at the beginning of the second quarter and appeared to lose the football, but upon review it was determined be broke the plane of the goal and was awarded a touchdown despite losing the ball at the height of his jump.

Drew Brees hit tight end Josh Hill for a three-yard score as the Saints jumped out to 7-3 lead in the first quarter against the Cowboys.

Brees was already 9-12 for 69 yards and the score in his first game back from injury. On the touchdown throw, Brees became the third quarterback (Brett Favre, Peyton Manning) in NFL history to throw 5,000 completions in his career. 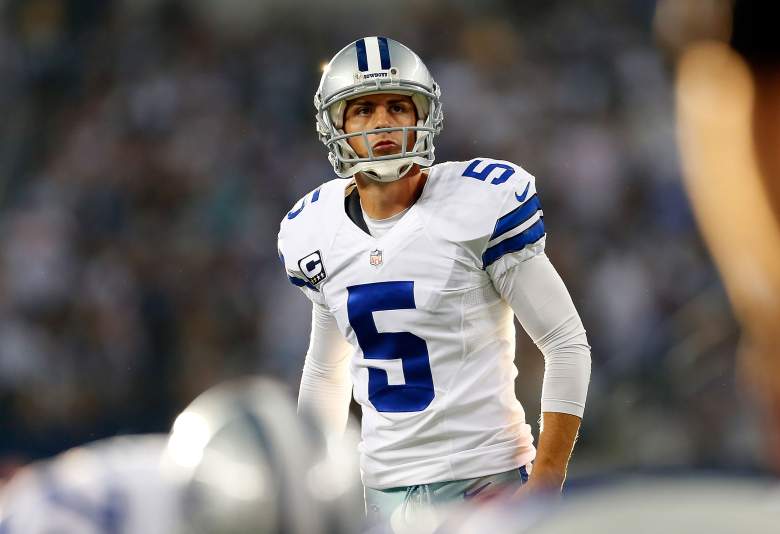 Dan Bailey gave the Cowboys an early lead at the Superdome. (Getty)

Dan Bailey connected on a 30-yard field goal on the Cowboys’ first drive, one that was highlighted by a Lance Dunbar 45-yard run. 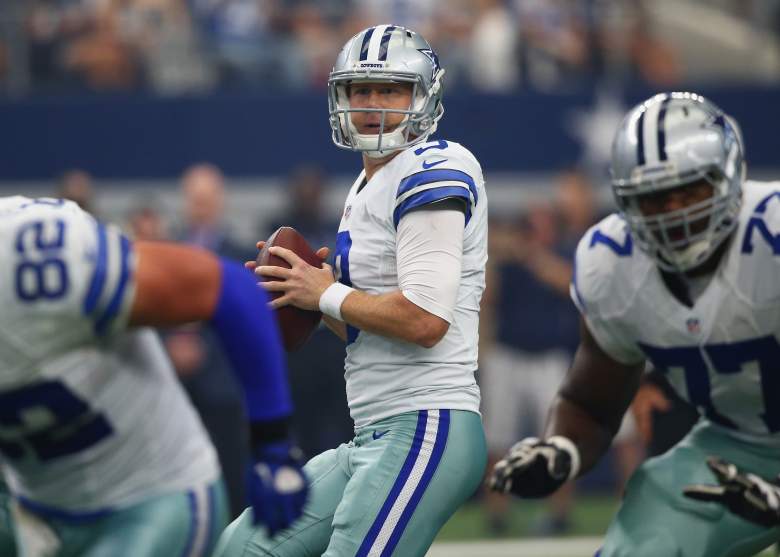 Brandon Weeden will have to step up for Dallas on Sunday night. (Getty)

Drew Brees is playing. Or so he says.

That could be bad news for the Cowboys. The winless Saints (0-3) are desperate, and their perennial All-Pro quarterback is determined. Dallas, meanwhile, will throw Brandon Weeden on the field (for now) as Tony Romo continues to rehabilitate his fractured collarbone.

The Cowboys lead the underwhelming NFC East at 2-1 after three weeks, while the Giants, Redskins and Eagles all sit at 1-2 below them. 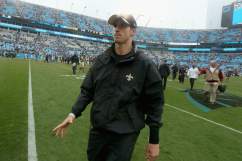