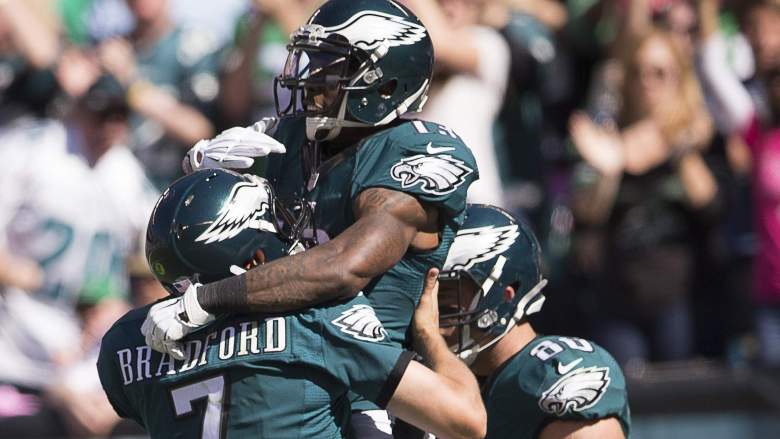 The Philadelphia Eagles nabbed a much-needed victory with a strong showing against the New Orleans Saints on Sunday. (Getty)

In a much-needed victory against another struggling squad, the Eagles offensive unit silenced at least some of its doubters with an impressive performance against the New Orleans Saints on Sunday afternoon. The squad racked up 519 total yards while Sam Bradford, despite two early interceptions, finished the day with 333 passing yards and two touchdowns on 32-of-45.

And then there was the run game. Finally. Finally. DeMarco Murray finished with a season-best 83 yards and one touchdown on a game-high 20 carries while Ryan Mathews chipped in 73 yards and a touchdown on eight carries of his own.

Coach Kelly: In our mindset as a team, we had to come out and play in all three phases. We had to win a football game.

But while the offense was dominant – and it really was, particularly in the second half – the Philadelphia defense was at its best so far this season. The Eagles recovered three New Orleans fumbles, forced two Drew Brees interceptions and held the Saints to minimal production all day.

Click here to see a full box score of the game and read on for a full recap of the matchup’s best higlights:

Way back in the preseason, this is the Philadelphia Eagles team we all thought we were going to get this year.

An offense that moved quickly, took advantage of opponent’s mistakes and a defense that forced those mistakes. Welcome to Week 5 where the Eagles’ preseason expectations are becoming reality.

After Walter Thurond picked off Drew Brees for the Saints fourth turnover of the afternoon, the Eagles padded their lead one play later with a DeMarco Murray four-yard touchdown run. Here’s how the second half has shaped up for Philadelphia:

The Eagles seized that chance.

Sam Bradford connected with Brent Celek on the ensuing play for the 13-yard touchdown. Hey, whatever Chip Kelly said at halftime must have really stuck with this squad.

Ryan Mathews Gave Philadelphia the Lead in the Third Quarter

After New Orleans had knotted things up at 10 all in the early minutes of the second half, the Eagles ground game answered as Ryan Mathews plowed his way into the end zone with a two-yard touchdown run.

Josh Huff (who had the other Eagles TD on the afternoon) was a big-time part of the Philadelphia’s drive, setting up Mathew’s TD run with a major catch and run to set the ball up at the two.

The Eagles Led the Saints 10 – 7 at Halftime 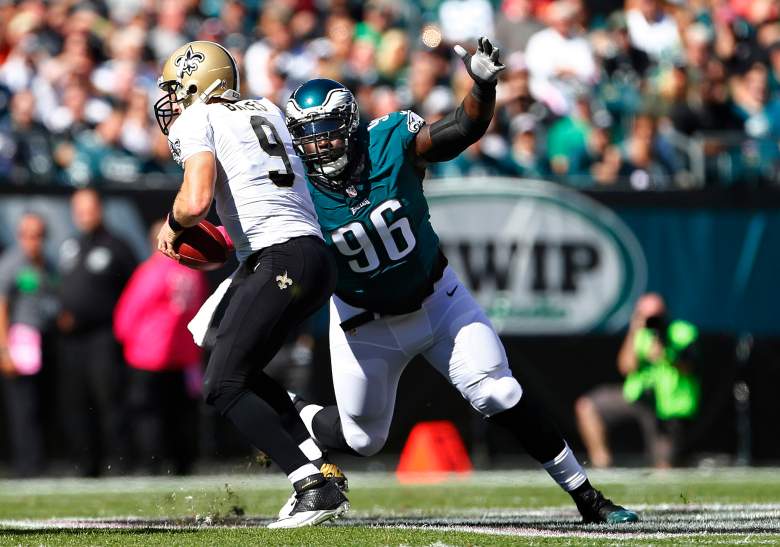 The New Orleans Saints and Philadelphia Eagles both struggled early to find much offensive momentum in their Week 5 tilt. (Getty)

Eagles have run 45 plays in the 1st half. Ran 51 in the entire game last week.

Whether or not that’s a good thing is yet to be seen. Sam Bradford struggled when forced to make quick decisions in the pocket, throwing two interceptions in the end zone against the New Orleans Saints. Still, it’s not all bad. At the end of the half Bradford had half-righted the ship, throwing for 215 total yards and one touchdown on 19-of-30.

The ground game, meanwhile, might actually be finding its footing. DeMarco Murray had nine carries in the first half for 44 yards. It’s still not exactly dominant but it’s a step in the right direction.

Drew Brees was 9-for-16 in the half, throwing for 102 yards and one touchdown. New Orleans offense clearly struggled early, however, recording just 130 total yards. The Eagles finished with 300.

Josh Huff Got the Eagles on the Board – With a Somersault

Josh Huffs and he puffs and he runs straight to the ?! #FlyEaglesFly pic.twitter.com/lD1PvnXIxz

Despite two red zone interceptions from Sam Bradford, Philadelphia’s offense was able to get on the board with just under 12 minutes left in the second quarter as Josh Huff found the end zone in style, somersaulting his way in. Check it out:

The 41-yard TD was nice enough. But that Josh Huff front flip into the end zone? Mercy. #NOvsPHI http://t.co/SDoVwTRScY

Haul took advantage of a big-time Saints defensive miscue, as New Orleans secondary seemed to trip over itself, and sprinted 41 yards into the end zone for his fist-ever career touchdown catch. He had previously returned a kick return for a touchdown.

Ben Watson left uncovered by Philly defense, Brees recognizes it and snaps it out there for the touchdown.

After the Bradford pick in the end zone, the Saints marched down the field and staged their own drive, capped off by a six-yard touchdown grab by Watson.

The already has two receptions for 27 yards while Drew Brees is 5-of-8 for 70 yards. Check out these drive stats:

Brandon Browner Picked Off Sam Bradford in the End Zone

The New Orleans Saints came into Week 5 without an interception to their collective defensive name. It didn’t take long for them to remedy that situation against the Philadelphia Eagles.

Brandon Browner stepped in front of Riley Cooper in the end zone and picked off Sam Bradford to cut a lengthy Philadelphia drive short and keep the Eagles off the board midway through the first quarter.

Saints' first pick of the season comes at a very key time. Brandon Browner picks it off in front of Riley Cooper.

Bradford and the Eagles offense had looked good marching down the field and the QB already had 73 yards on 7-of-11 passing.

It might be time to start worrying in Philadelphia.

The Eagles have yet to put together two full halves of football and, despite a three-touchdown performance by Sam Bradford in the second half, Philadelphia dropped yet another disappointing loss last week; this time to the Washington Redskins.

So, what’s the problem? And how can the Eagles fix it ahead of their matchup against the New Orleans Saints?

Well, there’s no clear cut answer (there never is in situations like this) but a big chunk of the problem is Philadelphia’s offensive line. It’s not very good. In fact, it’s pretty bad. That is when it’s on the field. Last week, the Eagles defense spent 41 minutes on the field. Out of a 60 minute game.

The Eagles offensive line needs to give Sam Bradford time to throw because when he has a few seconds to survey the field the first-year Philadelphia QB has been pretty good. Those three second half touchdowns are proof of that. They also need to block for DeMarco Murray who has 47 yards in three games, 30 of which came on a single play.

New Orleans is feeling confident coming into Week 5 and if the Eagles are going to get back on track, it’s going to have to start with the guys in the trenches. 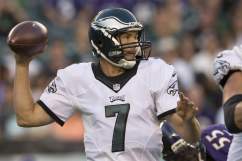