Arsenal need help in Champions League play, both on the field and off.

On the field, their numbers continue to dwindle. This weekend it was Francis Coquelin, who went down for the Gunners against West Brom. He suffered a knee injury and will miss at least two months, joining Danny Welbeck, Tomas Rosicky and Jack Wilshere amongst the walking wounded.

Arsenal will see the return of Aaron Ramsey, but it may be too little too late. Arsene Wenger’s side are six points behind both Bayern and Olimpiakos, and need a win Tuesday to stay in the hunt for the Knockout phase.

In their earlier meeting this year, Dinamo scored a 2-1 victory over Arsenal in Croatia. It was Zagreb’s first UCL group stage win in 16 years. After the win, Dinamo midfielder Arijan Ademi was given a four-year ban for failing a drug test. 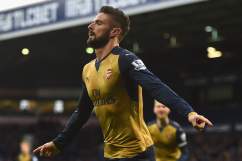 How to Watch Arsenal vs. Dinamo Zagreb Live Stream Online

Read More
Soccer, TV, UEFA Champions League
Arsenal has only a slim chance to advance past the UCL Group stage, and that includes a mandatory win over Dinamo Zagreb.