Wenger was critical of UEFA’s rules earlier this week, heading into a meeting with Dinamo Zagreb at the Emirates on Tuesday. Arsenal and Zagreb both hold just three points with two matches remaining in UCL Group play, and Wenger is pointing to the team’s last match as a point of contention.

In their previous meeting, Dinamo were victorious 2-1 in Croatia for their first Group win in 16 years. After the match, Dinamo midfielder Arijan Ademi failed a drug test and was given a four-year ban.

But the punishment isn’t enough for Wenger. The manager was upset that nothing was done to change the match result, in spite of known cheating by Dinamo.

“That means you basically accept doping,” Wenger told reporters. “But it is the rule and we accept that. We have to look at ourselves and deal with our own performance.”

Wenger may be desperate for answers as he deals with a mountain of injuries at Arsenal. But he cannot change the past, and must do his best to prepare for the future against Dinamo.

If you have the log-in info for a cable subscription with access to WatchESPN, you can watch the game at WatchESPN.com.

Mobile and tablet users with access to Watch ESPN can watch the game on the Watch ESPN app, which can be downloaded for free in the App Store, the Google Play store, the Amazon App store or the Windows Store. As is the case with desktop, you’ll need the log-in for a cable subscription with access to ESPN to watch the stream. 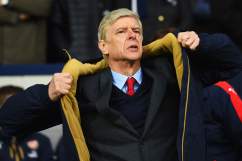