A 5-year-old boy who battled bravely against a rare brain tumor lost his fight on November 23. Chad Carr, the grandson of University of Michigan football legends Lloyd Carr and Tom Curtis, has died after more than one year struggle with cancer. He passed away on November 23, according to a tweet from his mother, Tammi.

1. His Mother Said That Chad ‘Left the Earth Peacefully’

In a message on his Facebook page, it reads:

At 1:21pm today, exactly 15 months since his DIPG diagnosis, Chad gained his angel wings. He left the earth peacefully and is now running and jumping in heaven.

It is well with his soul.

We will follow up with service details once we have everything arranged. We thank everyone for the support and ask for continued prayers for our family.

A day before his death, Tammi Carr posted this photo to her Twitter page:

2. His Parents Entered Him Into Hospice Care Earlier in November

Chad suffered from DIPG (Diffuse Intrinsic Pontine Giloma), it results in an inoperable brain tumor. Symptoms include “double vision, inability to close the eyelids completely, dropping one side of the face, and difficulty chewing and swallowing. Unfortunately these symptoms usually worsen rapidly because the tumor is rapidly growing.” Early in November, Chad’s parents took the decision to enter him into hospice care, taking him off medication which is family thought were making him worse, reported the Ann Arbor News.

3. His Battle Was Featured on ESPN’s ‘College GameDay’

Chad is survived by his mother Tammi and father Jason, as well as his siblings, CJ and Tommy. He was the nephew of former University of Michigan coach Lloyd Carr and former Michigan All-American Tom Curtis. Just days before his death, he was featured on ESPN’s GameDay prior to the Michigan-Ohio State game on November 21. On the same day, both Michigan State University and Ohio State wore special decals on their helmets to pay tribute to Chad. A Go Fund Me page for Chad has so far raised over $40,000 of a $50,000 target. That page encourages people to post messages of support on Twitter using the hashtag “#ChadTough.”

4. His Death Has Resulted in an Outpouring of Emotion on Twitter

As news of his death spread, people have been rushing to pay tribute to his brave 5-year-old on Twitter, using the hashtag “#ChadTough.” Here are some of the most poignant:

Cancer sucks. RIP Chad. Praying for comfort through the holidays for the family of #ChadTough

Praying for the Carr family #ChadTough

My heart goes out to the Carr family in this difficult time. Childhood cancer breaks my heart and will always hit close to home #ChadTough ?

5. Jim Harbaugh Brought in a Spiritual Healer to Try to Help Chad

Michigan Live reported on November 23, that Michigan head football coach Jim Harbaugh and his wife, Sarah, had reached out to Ohio-based spiritual healer, Dr. Issam Nemah, asking him to come and meet with little Chad. According to Nemah’s website, he’s a licensed doctor who now specializes in Meridian Regulatory Acupuncture. The Ann Arbor News reports that Nemah met with Chad for an hour and talked and prayed. In a Facebook post, Tammi Carr wrote that “I want everyone to know that we are treating Chad with alternative treatments. We want to make sure we have no regrets and feel like we did everything to help Chad.” 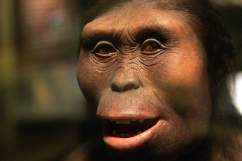 Who Is Lucy the Australopithecus? 5 Fast Facts You Need to Know