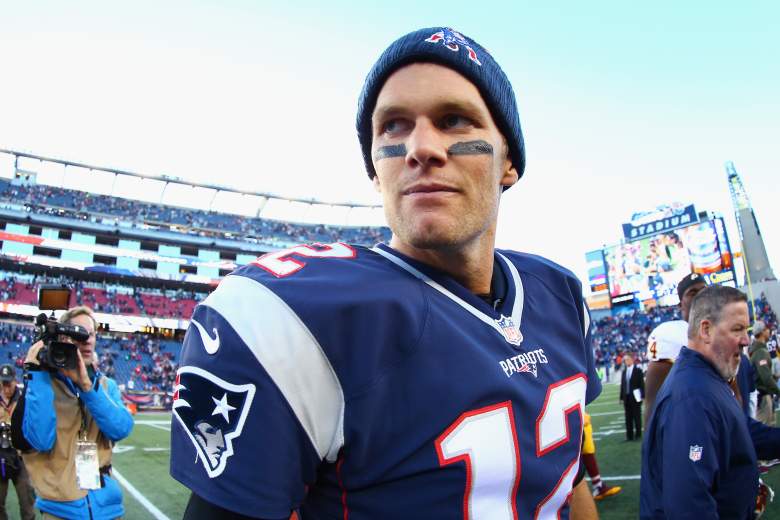 Tom Brady and the New England Patriots look to stay perfect on the season with a matchup against the New York Giants this Sunday. (Getty)

The New England Patriots stayed perfect on the season thanks to Stephen Gostkowski’s final-second 54-yard field goal, defeating the New York Giants in a game that was as dramatic as it had been hyped up to be. Here’s that final moment:

While Gostowki’s final play was the highlight of the matchup, the drive to get there was just as impressive.

Rookie safety Landon Collins thought he had picked off Tom Brady on the first play of the drive, but couldn’t hold onto the ball and Brady went on to convert on 4th-and-10 to keep the Patriots moving down the field. A Danny Amendola move against the Giants secondary put New England within field goal range and Gostkowski, the most consistent kicker in the NFL this season, did not disappoint.

Brady finished the game with 334 yards through the air with two and one interception.On the flip side, Eli Manning finished with 361 yards and two touchdowns. Click here for a full box score of the game and read on for some of the game’s best moments:

That so clearly was sort of a catch #NEvsNYG

If you know what does or doesn’t constitute a catch in the NFL, stand up and explain it to everyone else, because it’s all getting a bit confusing.

The Giants – after picking off Tom Brady – marched down the field from their own three yard line and got into the red zone with just over two minutes left on the clock. Eli Manning thought he had found Odell Beckham Jr. in the corner of the end zone for the go-ahead touchdown, but after further review it was ruled he didn’t have control of the ball and the score was called off.

New York ended up kicking a field goal on the drive to go up by two.

So, here’s what happened.

Tom Brady found Brandon LaFell for a 54-yard pass down the field. Jayron Hosley was inches away from picking it off.

Then, LeGarrette Blount ran into the end zone. Except the Patriots were called for offensive holding. No touchdown.

Then, then, Brady tried to find LeFell again in the end zone. Except he threw the ball behind his wide receiver and Trumaine McBride picked him off. Whoof.

Rob Gronkowski Refused to Be Tackled

That just about sums it all up. Rob Gronkowski is an enormous human being, who refused to be tackled by two New York Giants defenders in the middle of the field and continued to run right into the end zone. His touchdown gave the Patriots the lead for the first time since early in the first quarter.

Here’s how it played out:

The Giants defense, which had been so strong earlier in this game, has now given up a pair of major plays to New England. And, for good measure, that was the longest catch of Gronk’s career.

So, Danny Amendola wouldn’t stop running. Except his teammate had something else to say about that. Watch this:

The big 82-yard punt return by Danny Amendola, but his own teammate tripped him at the end to prevent a TD – https://t.co/799tIsjffl

Amendola was on his way into the end zone when he got tripped up by another special teams player, preventing the score and forcing the Patriots to go about scoring a touchdown in a slightly more conventional way. After a pass interference call put the all on the one yard line, LeGarrett Blount, quite literally, flew in for the touchdown to cut into the Giants lead.

DWAYNE HARRIS TOUCHDOWN! Keeps the feet in bounds for a 1-yard TD and the #Giants take a 17-10 lead before the half! pic.twitter.com/RNyyqXDSFX

After forcing the Patriots to punt late in the second quarter, New York took advantage of the remaining time on the clock and marched down the field for a final-second touchdown pass from Eli Manning to wide receiver Dwayne Harris.

Also, important to keep in mind? The Giants will get the ball back to start the second half.

What’s 87 yards? Not much when you’re Odell Beckham Jr.

That’s just one juke move, a dash down the field and right into the end zone. It also helps when you’re decked out like this:

Eli Manning found Beckham, Beckham lost the defense and the Giants tied up the game in the first quarter. Here’s another angle of this fairly ridiculous catch:

Tom Brady finds former Giant TE Scott Chandler with the 1-yard touchdown and the Patriots are off to a quick start, 7-0.

Well, that wasn’t that hard.

New England just marched down the field on the opening drive of the game, capped off by a one-yard Tom Brady touchdown pass to backup tight end Scott Chandler. Naturally. Check out this top-notch post-TD celebration:

Scott Chandler with an A+ celebration. pic.twitter.com/blh5kIFtsJ

This is not the Super Bowl. It’s not even a vaguely dramatic regular season finale. This is a Week 10, middle of the season matchup. But it’s also a New England Patriots and New York Giants game and things are going to get just a little bit scrappy.

It’s been an up-and-down, injury-filled season for Big Blue, but New York comes into the game 3-0 against the Patriots since the start of the 2008 calendar year. In that same time frame, New England has beaten every other team in the league. Also important to note? The Giants have snapped New England’s last two 10-plus win streaks.

So, what will it take for New York to put a notch in the Patriots loss column this week? Defense.

Of course, when you’re the Giants that whole idea of playing shut down defense is easier said than done. New York is averaging 77.9 yards per game to tight ends this season, second only to the New Orleans Saints. That simply can’t happen against Rob Gronkowski. He will have, a literal, field day if New York can’t at least try to contain him.

The Giants also need to get to Tom Brady. The veteran QB has only thrown two interceptions this season, but New York actually leads the NFL in takeaways. If Big Blue can get some pressure on Brady and maybe even force him to make some mistakes, things could get real interesting real fast here.