Can the New Orleans Saints hand the Carolina Panthers their first loss of the season?

After all, the Saints have proven all season that they can put points on the board and while their defense might not stack up to Carolina’s, New Orleans can make a game of it with some early touchdowns.

It’s a divisional matchup with plenty of postseason implications. In fact, the Panthers can clinch their playoff berth with a victory this afternoon. You’re going to want to watch this one.

TV Channel: Locally broadcast on FOX with Joe Buck and Troy Aikman on the call. Click here to see if you fall within the TV coverage zone.

Game Preview: Here’s something to take note of. The New Orleans Saints defense, the same group that has already seen its coordinator fired this season, will start two rookies on the line this afternoon.

Tyeler Davison, making his third start of the year, will take over for John Jenkins, while Bobby Richardson will also start at defensive end.

So, what does that mean? It means the Carolina Panthers offense will look to take advantage of the inexperience. Expect Cam Newton to move the ball quite a bit, both through the air and on the ground, particularly after he rushed for 33 yards and a touchdown in the first meeting against the Saints this season.

Also problematic for the Saints defense – covering tight ends. That won’t get any easier today with Greg Olsen on the Panthers roster. The Carolina standout caught eight passes for 134 yards and two touchdowns against the Saints earlier this year.

Add into the mix that Newton and Olsen have been almost unstoppable together this season and this might be a recipe for defensive disaster for the Saints. 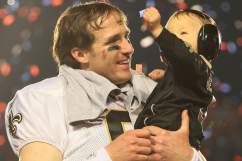