Leicester have the best away record in the Premier League, and they’ll head to the Emirates Sunday to face the only team that’s brought them down to Earth this season. Arsenal humbled the Foxes 5-2 in their first meeting this season, but Leicester have been a thorn in Arsenal’s title chances all season. The Gunners would be in line for the title without the miracle men of Leicester, who lead Arsenal by five points in the league table.

Arsenal picked Leicester apart in the first meeting, getting three goals from Alexis Sanchez and one apiece from Walcott and Giroud. The loss ended Leicester’s undefeated start, but it was right at the beginning of Jamie Vardy’s magical scoring run.

Leicester have not only scored seven wins away from King Power Stadium, they’ve scored a league-high 23 goals. Yet they are once again a large underdog to Arsenal, who have conceded only seven goals in 12 matches at the Emirates this season.

Leicester opened at +471 according to OddsShark.com, but some sites like Caesar’s Palace have that number down to +360. Arsenal are down as low as -135 at betting sites, a high favorite for a team that trails in the standings. But historically Leicester haven’t beaten Arsenal since 1994, a streak spanning more than 15 Premier League matches.

Alexis Sanchez posted three goals and his best match of the season in the last meeting, and the Colombian is +130 to score anytime this week at Bovada. Vardy is the Leicester favorite at +185, but I like Riyad Mahrez to score anytime at +300. Mahrez has been involved in four goals in his last three matches, and scored on a beautiful finish against City last week. 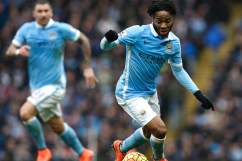 Read More
Arsenal, English Premier League, Soccer
Arsenal have allowed seven goals at home all season, but Leicester have scored more goals on the road than any other club.