Manchester City may be notable for dreadful performances against the top teams in the Premier League, but Tottenham has a been mostly an exception in recent meetings. Spurs defeated City convincingly in their most recent meeting, but have otherwise dropped four straight to the other Manchester club.

City’s struggles against the top are well-documented. They have failed to win against the league’s top three clubs this season, and have just three wins over the top 10 clubs. But wins against Southampton, Everton and Watford fail to impress, giving many the indication that City are league bullies. They can change their reputation by beating Tottenham, who have won six straight in all competitions and other than table leaders Leicester may be in the league’s best form.

Manchester City could get a huge boost from the return of Vincent Kompany. City always plays better with the Belgian captain in the middle, but a nagging leg injury has kept Kompany on the bench for most of the season. When Kompany rejoins other City regulars Silva, Toure and Aguero, the squad is tough to beat. When they were all healthy to begin the season, City won it’s four opening matches with a 10-0 scoring margin.

Spurs are the underdog heading into the Etihad, opening as high as +392 according to OddsShark.com. City are the best home team of any squad at the top, collecting nine victories at the Eithad this season. With title chances on the line and Kompany back in the lineup, City should have enough fight to win Sunday and claw back into the title race. Some sites have City to win as high as +108, with the draw a decent option at around +255.

With scorers all over the field, picking a goal prop can be a daunting task. With odds at Bovada Aguero is a ridiculous -115 to score anytime, so why not go for +350 for him to score first? If Spurs can see Dele Alli return to the lineup, he’s not a bad bet to score at +260 to score anytime. 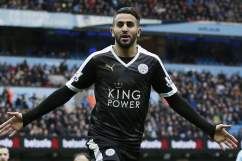 Read More
English Premier League, Soccer
City are the league's best home team, but their struggles against the best teams in England are well-documented.