Eight-division world boxing champion Manny Pacquiao will step into ring for a third time against the mighty Timothy Bradley this Saturday, April 9 at the MGM Grand Garden Arena in Las Vegas, Nevada.

But with a loaded undercard consisting of three fights, many are asking: what time will the main event hit the ring? 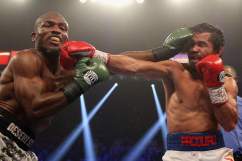 “I look forward to my battle with Timothy Bradley on April 9 and giving boxing fans a fight they will always remember,” said Pacquiao through a press release. “This fight has a very special meaning to me and I will pour every ounce of my being — physically, emotionally and spiritually — into preparing for Bradley.”

On the under card:

Oscar Valdez and former world champion Evgeny Gradovich will duke it out for the vacant WBO NABO featherweight title.

“These three fights are all action, complementing the Pacquiao vs Bradley main event which should also be a tremendous battle,” said Hall of Fame promoter Bob Arum of Top Rank.