In what may be the last fight of his long and illustrious career, Manny Pacquiao will take on Timothy Bradley for the vacant WBO International welterweight title on Saturday, April 9 at the MGM Grand Garden Arena in Las Vegas, Nevada.

“I look forward to my battle with Timothy Bradley on April 9 and giving boxing fans a fight they will always remember,” said Pacquiao via press release. “This fight has a very special meaning to me and I will pour every ounce of my being — physically, emotionally and spiritually — into preparing for Bradley. He has my full attention.”

Read on for the favorite to win the fight and an introduction to the protagonists.

Pacquiao vs. Bradley 3: Odds and Favorite to Win

This is the third meeting between these two iconic boxers. Bradley (33-1-1, 13 KOs) took their first encounter with a controversial split decision win in 2012 that many fans and members of the media thought was awarded to the wrong man. Things were different in their 2014 rematch, with Pacquiao (57-6-2, 38 KOs) scoring a unanimous decision victory that left no doubt who the winner was.

Pacquiao enters this Saturday’s fight as the favorite in Las Vegas and online sportsbooks. But with Bradley motivated by new coach Teddy Atlas in his corner, and Pacquiao with his eye on retirement and future plans– there could be an opportunity for Tim to claim the rubber match.

Let’s take a look at the bookie’s numbers:

“Well, everyone has their own opinion regarding the first fight,” Bradley said in a recent interview. “However way you want to look at it, it was a very close fight. The second fight, Pacquiao definitely won that fight hands down…This time around I have a new guy — Teddy Atlas — a guy that analyzes fighters for a living. That’s what he does — he’s an analyst and a trainer. The approach this time is going to be a lot different and I will be looking to exploit Pacquiao’s weaknesses.”

Timothy Bradley, fighting out of Palm Springs, California, made his last ring appearance with a knockout win over Brandon Rios last November. Prior to the Rios fight, Bradley, 32 years old, outpointed an undefeated Jessie Vargas,  and fought to a controversial draw against Argentine Diego Chaves. Bradley also holds victories over Juan Manuel Marquez, and Ruslan Provodnikov.

Manny Pacquiao, 37 years old, was most recently in action in one of the biggest fights in boxing history with a unanimous decision loss to Floyd Mayweather Jr. in May of last year. Pacquiao entered the fight against Mayweather having stopped Chris Algieri in November 2014 in Macao, China.

The Filipino legend is the only boxer to win eight world titles in as many different weight divisions, with victories over Oscar de la Hoya, Marco Antonio Barrera, Erik Morales, and Juan Manuel Marquez.

“Manny is the greatest fighter I have ever worked with,” said Pacquiao’s trainer Freddy Roach. “I have never seen another fighter accomplish so much. Forget the raw talent and drive to win, Manny was a great student who never rested on his laurels. I wish I had a million fighters with as much drive and a willingness to learn new things.”

Rounding out the undercard of the evening: 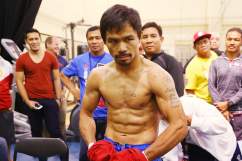 How Tall is Manny Pacquiao?

Read More
Boxing, Manny Pacquiao, Sports Betting
Manny Pacquiao takes on Timothy Bradley for the vacant WBO International welterweight title on Saturday. We have all your television and betting info.