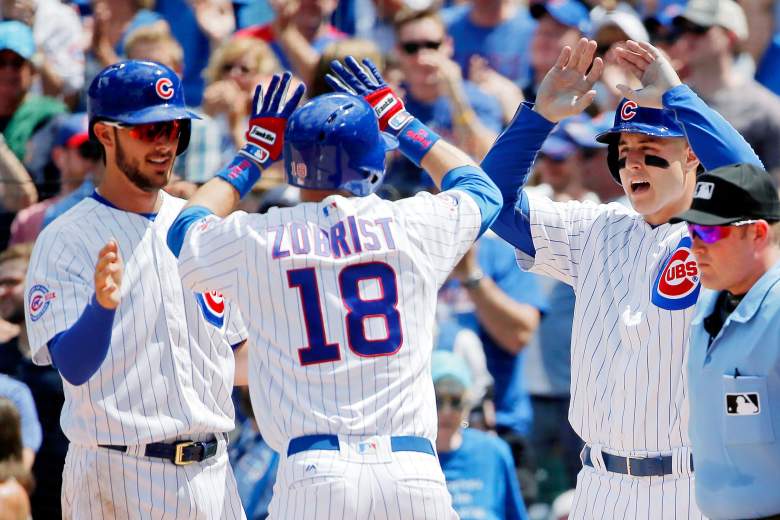 The Cubs dominated the first update. How do they fare in the voting this week? (Getty)

The Chicago Cubs are 40-17, on a historic pace and utterly decimating the rest of the National League. This was reflected in the first All-Star game voting update last week, where Cubs players led in 5 of 8 possible starting slots, including the entire infield.

Can any new players top the Cubs in the second week of voting, now that fans of other teams know they need to vote? Possibly. At shortstop the Cubs’ Addison Russell had the slightest lead over Colorado’s Trevor Story. And with Daniel Murphy continuing his dominant offensive season, can he make a run at Ben Zobrist’s lead? As for other, non-Cub races, Buster Posey looks to gain on the veteran Yadier Molina and earn the start at catcher, while a slew of talented National League outfielders look to gain ground over the top 3, who had a solid lead.

The full list of voting can be seen here. The National League All-Star voting leaders at each position are:

And so there were no changes to the starting lineup. The only difference at all is that Dexter Fowler lept over Bryce Harper to become the leading vote-getter in the outfield. Most Cubs infielders continue to pull away from the rest of the pack with Rizzo, Zobrist, and Bryant all above 1 million votes. Daniel Murphy trails Zobrist by about 350,000 votes, while Nolan Arenado is over 250,000 behind Kris Bryant at third base. Addison Russell pulled a little further away from Story as well, with a lead now of over 100,000 votes.

Catcher remains a close battle, but Molina continues to lead Posey, now by 60,000+ votes. The outfield, meanwhile, looks relatively set. Fowler, Harper, and Cespedes each have over 1 million votes each, while Chicago’s Jason Heyward is 4th win just over 700,000. The rest of the names are less players having great seasons and more players voters recognize (Andrew McCutchen, Hunter Pence, Giancarlo Stanton, etc.).

Fowler overtaking Harper for the lead amongst all outfielders suggests that there might not be a fall for Cubs players, as there often is when one team leads most positions in the first week. Not to say Fowler isn’t deserving – he’s 3rd in baseball in fWAR and absolutely deserves to be in the lead.

Other than that, frankly there’s very little to report in this update. Unless Washington or Colorado fans come out in droves, their second place players aren’t going to catch up. Other than a Molina/Posey battle, we may have the whole NL starting squad set already.