The Sharks played their first-ever home game in the Cup Final, and clinched their first win in the series with help from Joonas Donskoi.

Donskoi found the back of the net with a turnaround wrist shot at 12:18 of overtime to give the Sharks a 3-2 overtime win.

The Sharks showed their resiliency in front of an electric crowd at SAP Center as they cut the Pens series lead to 2-1.

The Penguins blocked 38 shot attempts by the Sharks and held a 42-26 shots advantage. 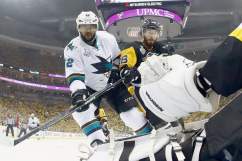