This is LeBron James’ third championship, and his first for Cleveland. The Cavs’ previous two Finals appearances in 2007 and 2015 were led by James, who left Cleveland for the Miami Heat in 2010.

After a dramatic return to the Cavaliers in 2015, James made the promise to fulfill a championship win for his home state. He carried through on Sunday, recording a triple-double with 27 points, 11 rebounds and 11 assists to help Cleveland come back from a 3-1 deficit and win the NBA Championship.

To recognize the historic victory, Nike released this emotional ad shortly after the Cavs won. The ad titled “Worth the Wait,” showcases a variety of fans in Cleveland watching James and his Cavaliers capture the momentous win. 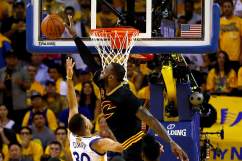