Patric Hornqvist scored with 52.3 seconds left in the second period to give the Pittsburgh Penguins a 2-1 lead in Game 3 of the Stanley Cup Final.

It marks Hornqvist’s eighth goal of the playoffs, but his first on the road.

The goal came after Sharks defenseman Justin Braun tied the game at 9:34 in the first period.

Ben Lovejoy helped the Penguins get off to a fast start with an early goal in the first period. 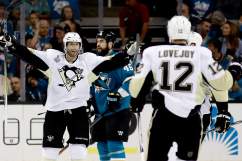