The 2016 Chicago Cubs are going to the World Series — for the first time since 1945. The Cubs defeated the Los Angeles Dodgers 5-0 on Saturday night at Wrigley Field to clinch the National League Championship Series and with it, a berth in the World Series where they’ll face the Cleveland Indians starting on Tuesday, October 25.

But the Cubs lost that 1945 World Series — and in fact, have not won a World Series since 1908, 108 years ago, when the world bore little resemblance to what we know today. Read on for an account of how the Cubs beat the Tigers for the second of only two World Series titles the team has ever won.

The 1908 series, with the Cubs facing the Detroit Tigers — who were led by the greatest hitter of his era, Ty Cobb — was only the fifth World Series ever played between the National League and the upstart American League which had been in existence as a “major” league only since 1901. The NL was formed in 1876.

The great American writer Mark Twain was still alive the last time the Cubs won the World Series, as was the legendary Apache Chief Geronimo, as Sports Illustrated writer Mark Rushin noted in his history of the 1908 World Series. Both Butch Cassidy and the Sundance Kid were still around, and so was former slave and crusading abolitionist Harriet Tubman who, more than a century later, is about to get her face on the U.S. $20 bill.

Movies were still silent, and though radio had been invented about a decade earlier, the first baseball game broadcast in the new medium wouldn’t happen until 1921, 13 years after the Cubs last won the World Series.

Baseball itself, while avidly followed across America and already the country’s most popular sport, certainly did not draw the audience that the sport commands today. A tiny crowd of 6,210 spectators at Bennet Park in Detroit watched the brilliantly named Cubs pitcher Orval Overall induce a ground ball from Tigers catcher Boss Schmidt to record the final out on October 14, 1908, giving the Cubs what no one at the time predicted would be their final World Series championship — at least until, possibly, 2016.

Given that the average life expectancy of the American male in 1908 was under 50 years, and the crowd that day was likely to be all men, it’s safe to say that not a single living soul today was there when the Cubs won that World Series.

The Cubs featured a double play combination that would, literally, be immortalized in poetry as “Tinker to Evers to Chance.” But that poem, about shortstop Joe Tinker, second baseman Johnny Evers and first baseman Frank Chance — who was also the Cubs manager in an era when player-managers were not unusual — would not be written by Franklin Pierce Adams until 1910.

While each of the three infielders collected two hits in the Game One slugfest, things looked bad for the Cubs who were the defending World Champions and were, in fact, playing in their third straight World Series. Starting Chicago pitcher Ed Reulbach, a 25-year-old righty who had won 24 games in the regular season, got knocked around for four runs in 6 1/3 innings and the visiting Cubs entered the top of the ninth down 6-5.

But then Detroit reliever Ed Summers, who had come on in the third inning, fell apart, allowing the Cubs to plate five runs in the top of the ninth. Cubs pitcher Mordecai “Three Finger” Brown — so nicknamed because he chopped off parts of two fingers on his pitching hand in a childhood farming mishap — closed out the game and got the win.

See the full box score and an description of every play in the game by visiting Baseball-Reference.com at this link.

West Side Park, the Cubs home in 1908. (Wikimedia Commons)

Players today complain about their travel schedules, but in 1908 the Cubs and Tigers simply hopped on a train after Game One and headed to Chicago to play the second game of the World Series the following afternoon (night baseball would not be invented for another 27 years).

In those days, the Cubs had not yet moved into Wrigley Field, playing their home games in West Side Park, where they would stay through the 1915 season. The Cubs started Overall, who had posted a 1.92 ERA that season, and the 27-year-old right-hander dueled Tigers ace “Wild” Bill Donovan through seven scoreless innings.

But after Overall again shut down the Tigers in the eighth, his teammates erupted to score six runs off a tiring Donovan in the bottom of that inning, including a two-run home run to deep right field by Tinker — who had hit only six all season, though that was the highest total of his career.

In fact, in that “dead ball” era of baseball, the entire Cubs team belted only 19 home runs in the entire 1908 regular season.

Overall allowed a run in the top of the ninth, surrendering an RBI single to the great Cobb, but otherwise cruised to the complete game victory.

The Cubs led the best-of-seven series 2-0. Check out full details of the game at this link.

After sweeping those same Tigers in the 1907 World Series — though one game had ended in a tie — the Cubs had now won six straight World Series games in which there was a decision. But that streak was about to end, thanks largely to the bat of one Tyrus Raymond Cobb.

In what is generally thought of as his finest single World Series performance, Cobb banged out three singles and a double in five at-bats, while Detroit’s 27-year-old right-handed starter George “Wabash George” Mullin coasted through the full nine innings to claim what turned out to be the Tigers’ only win of the series.

Mullin, a respected hitter in addition to being one of the Tigers’ most reliable hurlers, also singled in a run and drew a walk in four plate appearances.

Full stats and play-by-play of the game, also played at West Side Park, from Baseball-Reference.com can be found at this link. 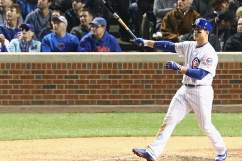 After the third game, the teams got back on their trains and chugged back to Detroit for Game Four the next day. In addition to the arduous train travel, the idea of days off in the World Series was still a long way off.

This time, the pitching was the story, as “Three Finger” Brown got the start to battle Detroit’s Game One loser Summers, who was much sharper in this outing.

But Summers wasn’t sharp enough. Cubs third baseman Harry Steinfeldt drove in what turned out to be the winning run with a two-on, two-out single in the top of the third, while Brown dazzled Tigers batters with a four-hit shutout, even holding Cobb hitless in three at-bats as 12,907 looked on at Bennet Park — in a game that was over in what today would be an unthinkably quick 95 minutes.

See the complete record of the 1908 World Series Game Four at this link.

The last time the Cubs won a World Series clincher, the game flew by in just one hour and 25 minutes as Overall, taking the mound on just two days rest after a complete game, again faced Donovan — also on two days rest after going the distance in Game Two.

Donovan pitch out of jam after jam, surrendering 10 hits and walking three, but keeping the Cubs to just two runs on the board. But the Tigers bats went silent for a second straight game as Overall stymied their attack, throwing a three-hit complete game shutout. Again, Cobb went 0-3, while Chance drove in Evers with a single in the top of the first that proved to be the only run the Cubs would need to nail down their second and last World Series Championship for at least 108 years.

The full record and stats for the 1908 World Series, with the Chicago Cubs defeating the Detroit Tigers, is at this link. 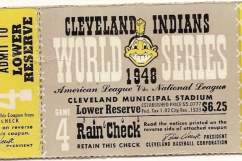 1948 World Series: How the Indians Beat the Braves